17 Bible Verses about Receiving Jesus As A Guest 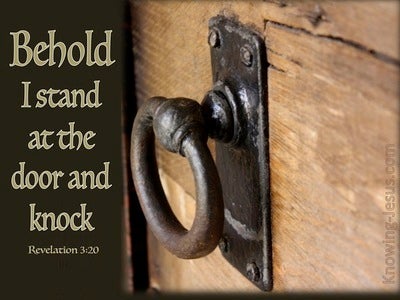 Jesus answered and said to him, “If anyone loves Me, he will keep My word; and My Father will love him, and We will come to him and make Our abode with him.

When they saw it, they all began to grumble, saying, “He has gone to be the guest of a man who is a sinner.”

Then it happened that as Jesus was reclining at the table in the house, behold, many tax collectors and sinners came and were dining with Jesus and His disciples.

And it *happened that He was reclining at the table in his house, and many tax collectors and sinners were dining with Jesus and His disciples; for there were many of them, and they were following Him.

And Levi gave a big reception for Him in his house; and there was a great crowd of tax collectors and other people who were reclining at the table with them.

Now when Jesus was in Bethany, at the home of Simon the leper, a woman came to Him with an alabaster vial of very costly perfume, and she poured it on His head as He reclined at the table.

Jesus, therefore, six days before the Passover, came to Bethany where Lazarus was, whom Jesus had raised from the dead. So they made Him a supper there, and Martha was serving; but Lazarus was one of those reclining at the table with Him. Mary then took a pound of very costly perfume of pure nard, and anointed the feet of Jesus and wiped His feet with her hair; and the house was filled with the fragrance of the perfume.

Now one of the Pharisees was requesting Him to dine with him, and He entered the Pharisee’s house and reclined at the table. And there was a woman in the city who was a sinner; and when she learned that He was reclining at the table in the Pharisee’s house, she brought an alabaster vial of perfume, and standing behind Him at His feet, weeping, she began to wet His feet with her tears, and kept wiping them with the hair of her head, and kissing His feet and anointing them with the perfume.read more.
Now when the Pharisee who had invited Him saw this, he said to himself, “If this man were a prophet He would know who and what sort of person this woman is who is touching Him, that she is a sinner.” And Jesus answered him, “Simon, I have something to say to you.” And he replied, “Say it, Teacher.” “A moneylender had two debtors: one owed five hundred denarii, and the other fifty. When they were unable to repay, he graciously forgave them both. So which of them will love him more?” Simon answered and said, “I suppose the one whom he forgave more.” And He said to him, “You have judged correctly.” Turning toward the woman, He said to Simon, “Do you see this woman? I entered your house; you gave Me no water for My feet, but she has wet My feet with her tears and wiped them with her hair. You gave Me no kiss; but she, since the time I came in, has not ceased to kiss My feet. You did not anoint My head with oil, but she anointed My feet with perfume. For this reason I say to you, her sins, which are many, have been forgiven, for she loved much; but he who is forgiven little, loves little.” Then He said to her, “Your sins have been forgiven.” Those who were reclining at the table with Him began to say to themselves, “Who is this man who even forgives sins?”

It happened that when He went into the house of one of the leaders of the Pharisees on the Sabbath to eat bread, they were watching Him closely.

But they urged Him, saying, “Stay with us, for it is getting toward evening, and the day is now nearly over.” So He went in to stay with them.

and both Jesus and His disciples were invited to the wedding.

Now one of the Pharisees was requesting Him to dine with him, and He entered the Pharisee’s house and reclined at the table.

But put on the Lord Jesus Christ, and make no provision for the flesh in regard to its lusts.