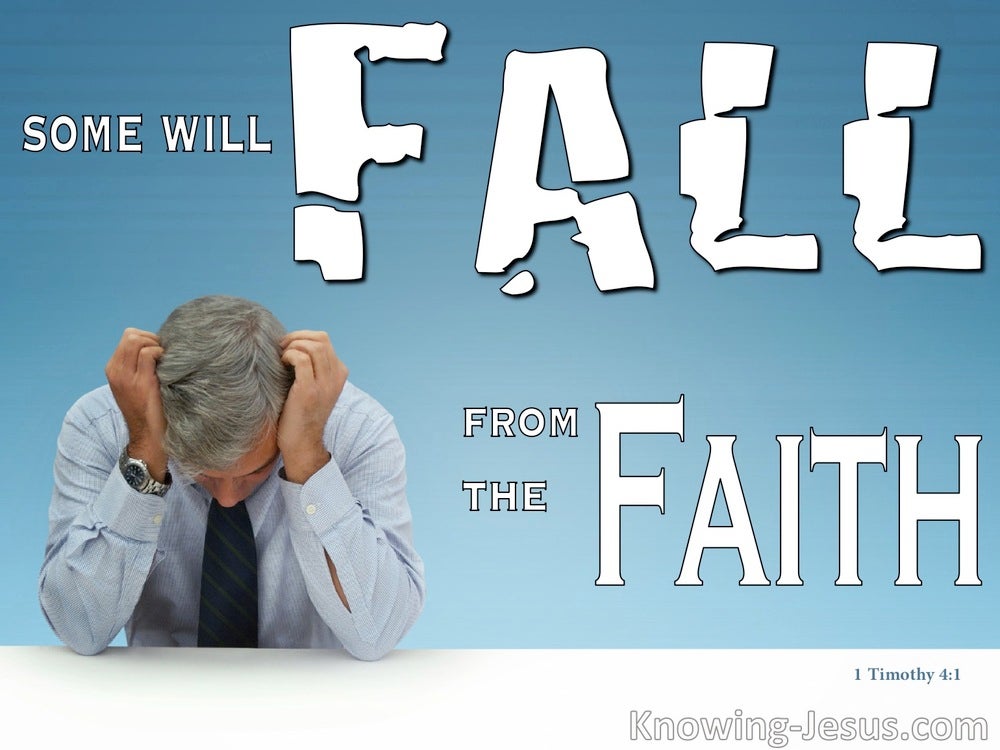 But evil men and impostors will proceed from bad to worse, deceiving and being deceived.

For many deceivers have gone out into the world, those who do not acknowledge Jesus Christ as coming in the flesh. This is the deceiver and the antichrist. Watch yourselves, that you do not lose what we have accomplished, but that you may receive a full reward. Anyone who goes too far and does not abide in the teaching of Christ, does not have God; the one who abides in the teaching, he has both the Father and the Son.read more.
If anyone comes to you and does not bring this teaching, do not receive him into your house, and do not give him a greeting; for the one who gives him a greeting participates in his evil deeds.

But they did not listen, and Manasseh seduced them to do evil more than the nations whom the Lord destroyed before the sons of Israel.

It is definitely because they have misled My people by saying, ‘Peace!’ when there is no peace. And when anyone builds a wall, behold, they plaster it over with whitewash;

for false Christs and false prophets will arise, and will show signs and wonders, in order to lead astray, if possible, the elect.

and from among your own selves men will arise, speaking perverse things, to draw away the disciples after them.

But the Spirit explicitly says that in later times some will fall away from the faith, paying attention to deceitful spirits and doctrines of demons,

“So My hand will be against the prophets who see false visions and utter lying divinations. They will have no place in the council of My people, nor will they be written down in the register of the house of Israel, nor will they enter the land of Israel, that you may know that I am the Lord God. It is definitely because they have misled My people by saying, ‘Peace!’ when there is no peace. And when anyone builds a wall, behold, they plaster it over with whitewash;

These things I have written to you concerning those who are trying to deceive you.

Then the Lord spoke to Moses, saying, “Be hostile to the Midianites and strike them; for they have been hostile to you with their tricks, with which they have deceived you in the affair of Peor and in the affair of Cozbi, the daughter of the leader of Midian, their sister who was slain on the day of the plague because of Peor.”

Then the Lord spoke to Moses, saying, “Take full vengeance for the sons of Israel on the Midianites; afterward you will be gathered to your people.” Moses spoke to the people, saying, “Arm men from among you for the war, that they may go against Midian to execute the Lord’s vengeance on Midian.read more.
A thousand from each tribe of all the tribes of Israel you shall send to the war.” So there were furnished from the thousands of Israel, a thousand from each tribe, twelve thousand armed for war. Moses sent them, a thousand from each tribe, to the war, and Phinehas the son of Eleazar the priest, to the war with them, and the holy vessels and the trumpets for the alarm in his hand. So they made war against Midian, just as the Lord had commanded Moses, and they killed every male. They killed the kings of Midian along with the rest of their slain: Evi and Rekem and Zur and Hur and Reba, the five kings of Midian; they also killed Balaam the son of Beor with the sword. The sons of Israel captured the women of Midian and their little ones; and all their cattle and all their flocks and all their goods they plundered. Then they burned all their cities where they lived and all their camps with fire. They took all the spoil and all the prey, both of man and of beast. They brought the captives and the prey and the spoil to Moses, and to Eleazar the priest and to the congregation of the sons of Israel, to the camp at the plains of Moab, which are by the Jordan opposite Jericho.

Again, the devil *took Him to a very high mountain and *showed Him all the kingdoms of the world and their glory;

It came about after these events that his master’s wife looked with desire at Joseph, and she said, “Lie with me.” But he refused and said to his master’s wife, “Behold, with me here, my master does not concern himself with anything in the house, and he has put all that he owns in my charge. There is no one greater in this house than I, and he has withheld nothing from me except you, because you are his wife. How then could I do this great evil and sin against God?”read more.
As she spoke to Joseph day after day, he did not listen to her to lie beside her or be with her. Now it happened one day that he went into the house to do his work, and none of the men of the household was there inside. She caught him by his garment, saying, “Lie with me!” And he left his garment in her hand and fled, and went outside.

“I was due to offer peace offerings;
Today I have paid my vows.
“Therefore I have come out to meet you,
To seek your presence earnestly, and I have found you.
“I have spread my couch with coverings,
With colored linens of Egypt.
read more.
“I have sprinkled my bed
With myrrh, aloes and cinnamon.
“Come, let us drink our fill of love until morning;
Let us delight ourselves with caresses.
“For my husband is not at home,
He has gone on a long journey;
He has taken a bag of money with him,
At the full moon he will come home.”

With her many persuasions she entices him;
With her flattering lips she seduces him.
Suddenly he follows her
As an ox goes to the slaughter,
Or as one in fetters to the discipline of a fool,
Until an arrow pierces through his liver;
As a bird hastens to the snare,
So he does not know that it will cost him his life.

for they have been hostile to you with their tricks, with which they have deceived you in the affair of Peor and in the affair of Cozbi, the daughter of the leader of Midian, their sister who was slain on the day of the plague because of Peor.”

While Israel remained at Shittim, the people began to play the harlot with the daughters of Moab. For they invited the people to the sacrifices of their gods, and the people ate and bowed down to their gods. So Israel joined themselves to Baal of Peor, and the Lord was angry against Israel.read more.
The Lord said to Moses, “Take all the leaders of the people and execute them in broad daylight before the Lord, so that the fierce anger of the Lord may turn away from Israel.” So Moses said to the judges of Israel, “Each of you slay his men who have joined themselves to Baal of Peor.” Then behold, one of the sons of Israel came and brought to his relatives a Midianite woman, in the sight of Moses and in the sight of all the congregation of the sons of Israel, while they were weeping at the doorway of the tent of meeting.

But evil men and impostors

and from among your own selves men will arise, speaking perverse things, to draw away

But they did not listen, and Manasseh

It is definitely because they have