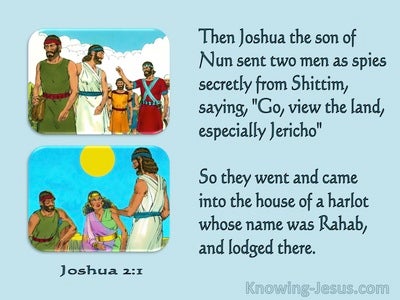 Joseph remembered the dreams which he had about them, and said to them, “You are spies; you have come to look at the undefended parts of our land.” Then they said to him, “No, my lord, but your servants have come to buy food. We are all sons of one man; we are honest men, your servants are not spies.”

Moses sent to spy out Jazer, and they captured its villages and dispossessed the Amorites who were there.

“Then all of you approached me and said, ‘Let us send men before us, that they may search out the land for us, and bring back to us word of the way by which we should go up and the cities which we shall enter.’

Then Joshua the son of Nun sent two men as spies secretly from Shittim, saying, “Go, view the land, especially Jericho.” So they went and came into the house of a harlot whose name was Rahab, and lodged there. It was told the king of Jericho, saying, “Behold, men from the sons of Israel have come here tonight to search out the land.” And the king of Jericho sent word to Rahab, saying, “Bring out the men who have come to you, who have entered your house, for they have come to search out all the land.”

Joshua 6:17
Verse Concepts
Under The BanKillingPeople Hiding People
The AccursedHelpfulness

The city shall be under the ban, it and all that is in it belongs to the Lord; only Rahab the harlot and all who are with her in the house shall live, because she hid the messengers whom we sent.

By faith Rahab the harlot did not perish along with those who were disobedient, after she had welcomed the spies in peace.

In the same way, was not Rahab the harlot also justified by works when she received the messengers and sent them out by another way?

Joshua 7:2
Verse Concepts
SpyingGradual Conquest Of The Land
Ai, The CityLand, As A Divine Gift

Now Joshua sent men from Jericho to Ai, which is near Beth-aven, east of Bethel, and said to them, “Go up and spy out the land.” So the men went up and spied out Ai.

The house of Joseph spied out Bethel (now the name of the city was formerly Luz). The spies saw a man coming out of the city and they said to him, “Please show us the entrance to the city and we will treat you kindly.”

So the sons of Dan sent from their family five men out of their whole number, valiant men from Zorah and Eshtaol, to spy out the land and to search it; and they said to them, “Go, search the land.” And they came to the hill country of Ephraim, to the house of Micah, and lodged there.

the princes of the Ammonites said to Hanun their lord, “Do you think that David is honoring your father because he has sent consolers to you? Has David not sent his servants to you in order to search the city, to spy it out and overthrow it?”

But the princes of the sons of Ammon said to Hanun, “Do you think that David is honoring your father, in that he has sent comforters to you? Have not his servants come to you to search and to overthrow and to spy out the land?”

So they watched Him, and sent spies who pretended to be righteous, in order that they might catch Him in some statement, so that they could deliver Him to the rule and the authority of the governor. They questioned Him, saying, “Teacher, we know that You speak and teach correctly, and You are not partial to any, but teach the way of God in truth. Is it lawful for us to pay taxes to Caesar, or not?”

Then the Pharisees went and plotted together how they might trap Him in what He said. And they *sent their disciples to Him, along with the Herodians, saying, “Teacher, we know that You are truthful and teach the way of God in truth, and defer to no one; for You are not partial to any.

Then they *sent some of the Pharisees and Herodians to Him in order to trap Him in a statement. They *came and *said to Him, “Teacher, we know that You are truthful and defer to no one; for You are not partial to any, but teach the way of God in truth. Is it lawful to pay a poll-tax to Caesar, or not?

But it was because of the false brethren secretly brought in, who had sneaked in to spy out our liberty which we have in Christ Jesus, in order to bring us into bondage.

I was forty years old when

Then they took some of the fruit of the land in their hands and brought it down to us; and they brought us back a report and said, ‘It is a good land which the Lord our God is about to give us.’

Spies » Used at the court of absalom

But Absalom sent spies throughout all the tribes of Israel, saying, “As soon as you hear the sound of the trumpet, then you shall say, ‘

Furthermore, Ahithophel said to Absalom, "Please let me choose 12,000 men that I may arise and pursue David tonight. "I will come upon him while he is weary and exhausted and terrify him, so that all the people who are with him will flee Then I will strike down the king alone, and I will bring back all the people to you. The return of everyone depends on the man you seek; then all the people will be at peace." read more.
So the plan pleased Absalom and all the elders of Israel. Then Absalom said, "Now call Hushai the Archite also, and let us hear what he has to say." When Hushai had come to Absalom, Absalom said to him, "Ahithophel has spoken thus. Shall we carry out his plan? If not, you speak." So Hushai said to Absalom, "This time the advice that Ahithophel has given is not good." Moreover, Hushai said, "You know your father and his men, that they are mighty men and they are fierce, like a bear robbed of her cubs in the field. And your father is an expert in warfare, and will not spend the night with the people. "Behold, he has now hidden himself in one of the caves or in another place; and it will be when he falls on them at the first attack, that whoever hears it will say, 'There has been a slaughter among the people who follow Absalom.' "And even the one who is valiant, whose heart is like the heart of a lion, will completely lose heart; for all Israel knows that your father is a mighty man and those who are with him are valiant men. "But I counsel that all Israel be surely gathered to you, from Dan even to Beersheba, as the sand that is by the sea in abundance, and that you personally go into battle. "So we shall come to him in one of the places where he can be found, and we will fall on him as the dew falls on the ground; and of him and of all the men who are with him, not even one will be left. "If he withdraws into a city, then all Israel shall bring ropes to that city, and we will drag it into the valley until not even a small stone is found there." Then Absalom and all the men of Israel said, "The counsel of Hushai the Archite is better than the counsel of Ahithophel." For the LORD had ordained to thwart the good counsel of Ahithophel, so that the LORD might bring calamity on Absalom. Then Hushai said to Zadok and to Abiathar the priests, "This is what Ahithophel counseled Absalom and the elders of Israel, and this is what I have counseled. "Now therefore, send quickly and tell David, saying, 'Do not spend the night at the fords of the wilderness, but by all means cross over, or else the king and all the people who are with him will be destroyed.'" Now Jonathan and Ahimaaz were staying at En-rogel, and a maidservant would go and tell them, and they would go and tell King David, for they could not be seen entering the city.

Moses sent to spy out

David sent out spies, and he knew that Saul was definitely coming.

Spies » In the congregation of galatia

But it was because of the