If only you would tear open the heavens and come down, so that the mountains would quake at your presence

O let the heavens be broken open and come down, so that the mountains may be shaking before you,

Would that thou didst rend the heavens; thou camest down; the mountains flowed from before thee.

Would that you would tear [the] heavens [and] come down; [the] mountains would quake before you,

Oh that You would tear the heavens and come down, that mountains would quake before You,

O that thou wouldest cleave the heaven in sunder, and come down: that the mountains might melt away at thy presence,

If only you would tear apart the sky and come down! The mountains would tremble before you!

Would that thou hadst rent the heavens, hadst come down,

Didst Thou not rend the heavens? Thou didst come down, From thy presence did mountains flow, 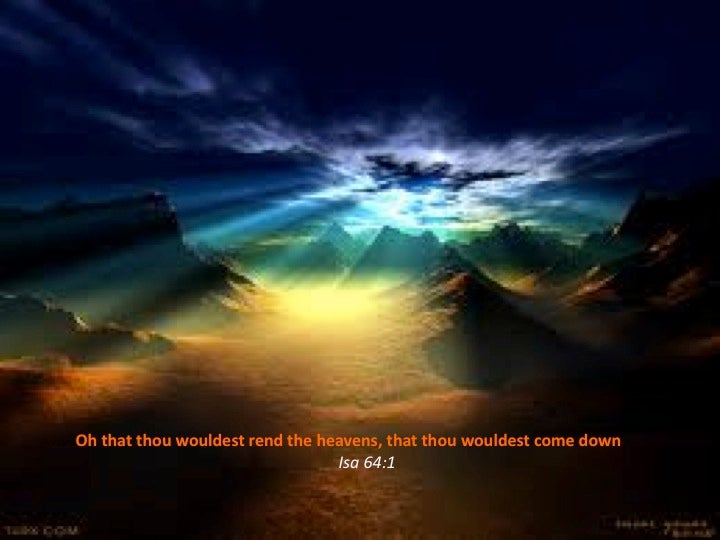 Mountains » Volcanic fires of, alluded to

English(KJV)
Strong's
Root Form
Definition
Usage
Oh
H3863
לוּ לא לוּא
Luw'
if, would God, O that, Oh, would it might be, if haply, peradventure, Oh that, pray thee, Though, would
Usage: 22

that thou wouldest come down
H3381
ירד
Yarad
down, descend, variant, fell, let, abundantly, down by, indeed, put off, light off, out, sank, subdued, take
Usage: 378

Word Count of 20 Translations in Isaiah 64:1 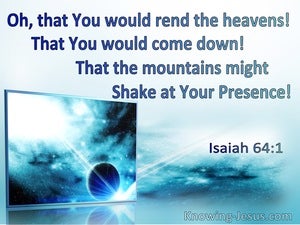 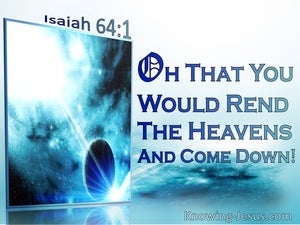 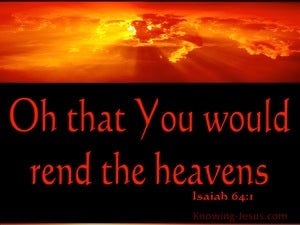 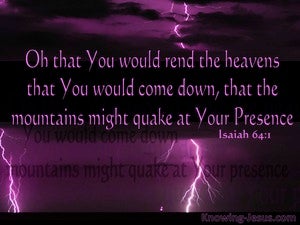 Other Readings
Prayer For Mercy And Pardon

Look here! The LORD is coming from his place! He will come down and will trample down the high places throughout the land.

so I have come down to deliver them from their domination by the Egyptians and to bring them out of that land to a good and spacious land, a land flowing with milk and honey, to the territory of the Canaanites, the Hittites, the Amorites, the Perizzites, the Hivites, and the Jebusites.

and be ready for the third day, for on the third day the LORD will come down on Mount Sinai in the sight of all the people.

Mount Sinai was completely enveloped in smoke because the LORD had come down in fire on it. Smoke went up from it like smoke from a kiln, and the whole mountain shook violently.

LORD, when you left Seir, when you marched out from the grain field of Edom, the earth quaked and the heavens poured out rain; indeed, the clouds poured out water.

The world shook and trembled; the foundations of the mountains quaked, they shook because he was angry.

The nations roared; the kingdoms were shaken. His voice boomed; the earth melts.

Bow your heavens, LORD, and descend; touch the mountains, and they will smolder.

Look down from heaven, and see from your holy and glorious dwelling. Where are your zeal and your might? Where are the yearning of your heart and your compassion? They are held back from me.

"The Lord GOD of the Heavenly Armies who is touching the earth so that it melts and all of its inhabitants mourn there the land rises like the Nile River, but sinks like the river of Egypt

Mountains shake because of him, and the hills melt. The earth goes into upheaval at his presence, as does the world with all of its inhabitants.

A prayer by the prophet Habakkuk, set to music.

Just as he was coming up out of the water, he saw the heavens split open and the Spirit descending on him like a dove.

But the Day of the Lord will come like a thief. On that day the heavens will disappear with a roaring sound, the elements will be destroyed by fire, and the earth and everything done on it will be exposed.

Then I saw a large, white throne and the one who was sitting on it. The earth and the heavens fled from his presence, and no place was found for them.