“Look, the days are coming”—this is the Lord’s declaration—“when I will make a new covenant

"Look, days are coming," declares the LORD, "when I'll make a new covenant with the house of Israel and the house of Judah.

Behold the days coming, says Jehovah, and I cut out the house of Israel and the house of Judah a new covenant

"Indeed, a time is coming," says the Lord, "when I will make a new covenant with the people of Israel and Judah.

The Covenant » Renewed under the gospel

Word Count of 20 Translations in Jeremiah 31:31 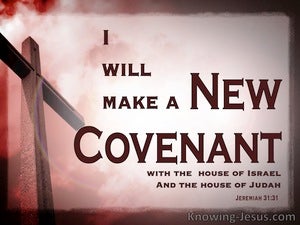 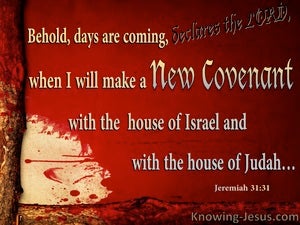 The Future Prosperity Of God's People

Other Readings
The New Covenant The New Promise

I will make an

I will make a

And in the same way He took the cup after they had eaten, saying,

who also made us adequate as

In the same way He took

“Behold, days are coming,” declares the Lord, “when I will

“In those days and at that time,” declares the Lord, “the sons of Israel will come, both they and the sons of Judah

And those who will

But now He has obtained a more excellent ministry, by as much as He is also the

and to Jesus, the