17 Bible Verses about Abuse From a Spouse 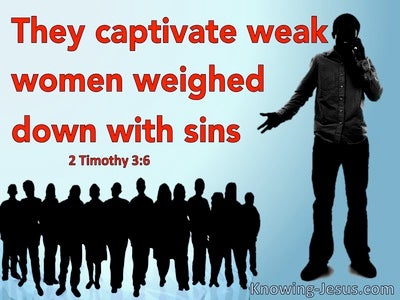 Husbands, love your wives and do not be embittered against them.

Remember the prisoners, as though in prison with them, and those who are ill-treated, since you yourselves also are in the body.

Yet if the unbelieving one leaves, let him leave; the brother or the sister is not under bondage in such cases, but God has called us to peace.

But realize this, that in the last days difficult times will come. For men will be lovers of self, lovers of money, boastful, arrogant, revilers, disobedient to parents, ungrateful, unholy, unloving, irreconcilable, malicious gossips, without self-control, brutal, haters of good,read more.
treacherous, reckless, conceited, lovers of pleasure rather than lovers of God, holding to a form of godliness, although they have denied its power; Avoid such men as these. For among them are those who enter into households and captivate weak women weighed down with sins, led on by various impulses, always learning and never able to come to the knowledge of the truth. Just as Jannes and Jambres opposed Moses, so these men also oppose the truth, men of depraved mind, rejected in regard to the faith.

Wives, be subject to your own husbands, as to the Lord.

For I hate divorce,” says the Lord, the God of Israel, “and him who covers his garment with wrong,” says the Lord of hosts. “So take heed to your spirit, that you do not deal treacherously.”

Husbands, love your wives, just as Christ also loved the church and gave Himself up for her,

What therefore God has joined together, let no man separate.”

Husbands, love your wives, just as Christ also loved the church and gave Himself up for her, so that He might sanctify her, having cleansed her by the washing of water with the word, that He might present to Himself the church in all her glory, having no spot or wrinkle or any such thing; but that she would be holy and blameless.read more.
So husbands ought also to love their own wives as their own bodies. He who loves his own wife loves himself; for no one ever hated his own flesh, but nourishes and cherishes it, just as Christ also does the church,

Let all bitterness and wrath and anger and clamor and slander be put away from you, along with all malice.

If possible, so far as it depends on you, be at peace with all men.

but I say to you that everyone who divorces his wife, except for the reason of unchastity, makes her commit adultery; and whoever marries a divorced woman commits adultery.