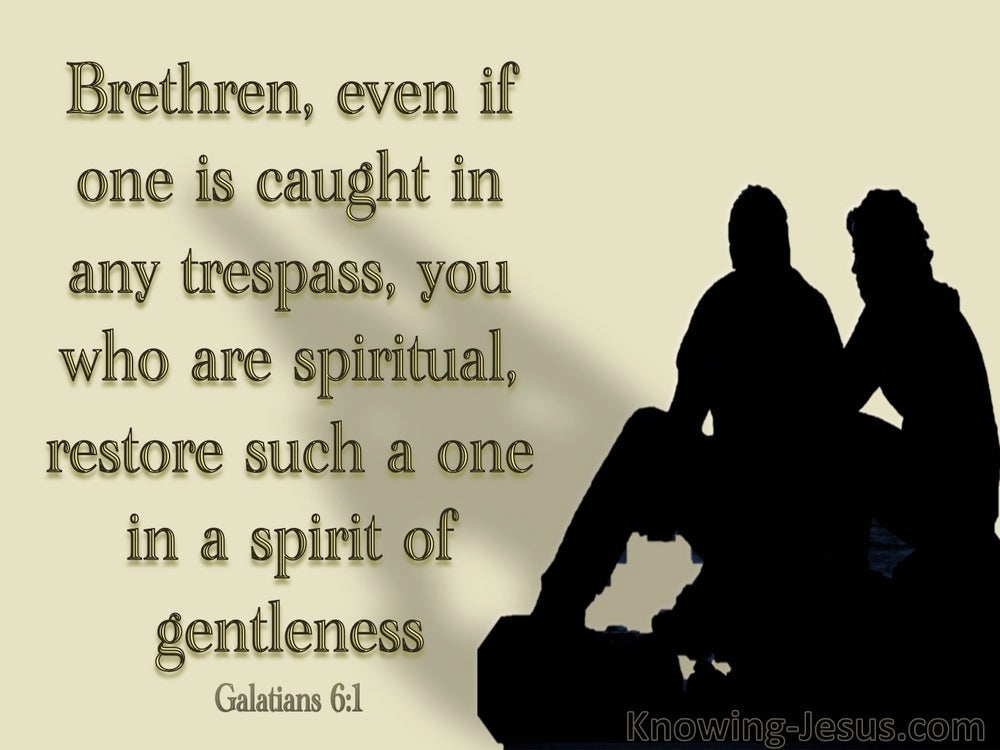 Brethren, even if anyone is caught in any trespass, you who are spiritual, restore such a one in a spirit of gentleness; each one looking to yourself, so that you too will not be tempted. Bear one another’s burdens, and thereby fulfill the law of Christ. For if anyone thinks he is something when he is nothing, he deceives himself.read more.
But each one must examine his own work, and then he will have reason for boasting in regard to himself alone, and not in regard to another. For each one will bear his own load.

If anyone does not obey our instruction in this letter, take special note of that person and do not associate with him, so that he will be put to shame.

Those who continue in sin, rebuke in the presence of all, so that the rest also will be fearful of sinning.

Brethren, even if anyone is caught in any trespass, you who are spiritual, restore such a one in a spirit of gentleness; each one looking to yourself, so that you too will not be tempted.

My brethren, if any among you strays from the truth and one turns him back, let him know that he who turns a sinner from the error of his way will save his soul from death and will cover a multitude of sins.

Be on your guard! If your brother sins, rebuke him; and if he repents, forgive him.

And Jesus entered the temple and drove out all those who were buying and selling in the temple, and overturned the tables of the money changers and the seats of those who were selling doves.

So the Lord said to Joshua, “Rise up! Why is it that you have fallen on your face? Israel has sinned, and they have also transgressed My covenant which I commanded them. And they have even taken some of the things under the ban and have both stolen and deceived. Moreover, they have also put them among their own things. Therefore the sons of Israel cannot stand before their enemies; they turn their backs before their enemies, for they have become accursed. I will not be with you anymore unless you destroy the things under the ban from your midst.read more.
Rise up! Consecrate the people and say, ‘Consecrate yourselves for tomorrow, for thus the Lord, the God of Israel, has said, “There are things under the ban in your midst, O Israel. You cannot stand before your enemies until you have removed the things under the ban from your midst.” In the morning then you shall come near by your tribes. And it shall be that the tribe which the Lord takes by lot shall come near by families, and the family which the Lord takes shall come near by households, and the household which the Lord takes shall come near man by man. It shall be that the one who is taken with the things under the ban shall be burned with fire, he and all that belongs to him, because he has transgressed the covenant of the Lord, and because he has committed a disgraceful thing in Israel.’” So Joshua arose early in the morning and brought Israel near by tribes, and the tribe of Judah was taken. He brought the family of Judah near, and he took the family of the Zerahites; and he brought the family of the Zerahites near man by man, and Zabdi was taken. He brought his household near man by man; and Achan, son of Carmi, son of Zabdi, son of Zerah, from the tribe of Judah, was taken. Then Joshua said to Achan, “My son, I implore you, give glory to the Lord, the God of Israel, and give praise to Him; and tell me now what you have done. Do not hide it from me.” So Achan answered Joshua and said, “Truly, I have sinned against the Lord, the God of Israel, and this is what I did: when I saw among the spoil a beautiful mantle from Shinar and two hundred shekels of silver and a bar of gold fifty shekels in weight, then I coveted them and took them; and behold, they are concealed in the earth inside my tent with the silver underneath it.” So Joshua sent messengers, and they ran to the tent; and behold, it was concealed in his tent with the silver underneath it.

But when Cephas came to Antioch, I opposed him to his face, because he stood condemned. For prior to the coming of certain men from James, he used to eat with the Gentiles; but when they came, he began to withdraw and hold himself aloof, fearing the party of the circumcision. The rest of the Jews joined him in hypocrisy, with the result that even Barnabas was carried away by their hypocrisy.

An evil and adulterous generation seeks after a sign; and a sign will not be given it, except the sign of Jonah.” And He left them and went away.