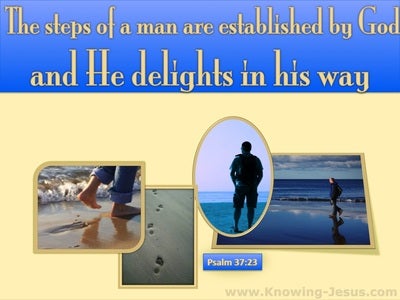 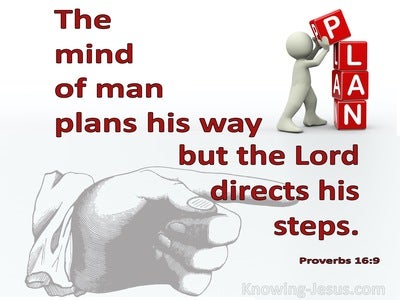 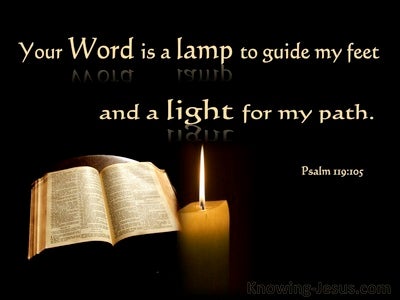 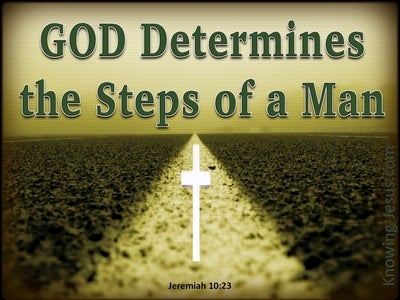 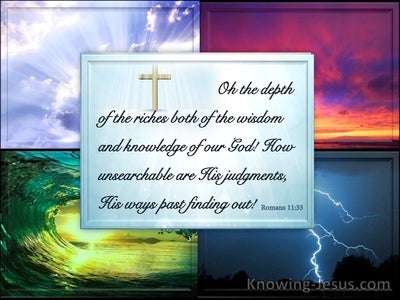 My steps establish by Thy saying, And any iniquity doth not rule over me.

From Jehovah are the steps of a man, They have been prepared, And his way he desireth.

In the sea is Thy way, And Thy paths are in many waters, And Thy tracks have not been known.

And He doth cause me to come up From a pit of desolation -- from mire of mud, And He raiseth up on a rock my feet, He is establishing my steps.

The heart of man deviseth his way, And Jehovah establisheth his step.

'Every place on which the sole of your foot treadeth, to you I have given it, as I have spoken unto Moses.

for to this ye were called, because Christ also did suffer for you, leaving to you an example, that ye may follow his steps,

In all thy ways know thou Him, And He doth make straight thy paths.

Thou hast crowned the year of Thy goodness, And Thy paths drop fatness.

Nun. A lamp to my foot is Thy word, And a light to my path.

Righteousness before Him goeth, And maketh His footsteps for a way!

He who is saying in him he doth remain, ought according as he walked also himself so to walk.

seeing Jehovah hath caused the camp of Aram to hear a noise of chariot and a noise of horse -- a noise of great force, and they say one unto another, 'Lo, the king of Israel hath hired against us the kings of the Hittites, and the kings of Egypt, to come against us.'

To uphold my goings in Thy paths, My steps have not slidden.

I have known, O Jehovah, that not of man is his way, Not of man the going and establishing of his step.

From Jehovah are the steps of a man, And man -- how understandeth he his way?

Her feet are going down to death, Sheol do her steps take hold of.

Proverbs 2:18
Verse Concepts
Sinners Grasped By DeathPathsAdultery, Results Of
SpiritsPaths Of The Wicked

For her house hath inclined unto death, And unto Rephaim her paths.

Lift up Thy steps to the perpetual desolations, Everything the enemy did wickedly in the sanctuary.

Whose paths are crooked, Yea, they are perverted in their ways.

On His step hath my foot laid hold, His way I have kept, and turn not aside,

Jehovah is slow to anger, and great in power, And Jehovah doth not entirely acquit, In a hurricane and in a tempest is His way, And a cloud is the dust of His feet.

Followers of me become ye, as I also am of Christ.

Into the path of the wicked enter not, And be not happy in a way of evil doers.

Tread it down doth a foot, Feet of the poor -- steps of the weak.

The voice of Thy thunder is in the spheres, Lightnings have lightened the world, The earth hath trembled, yea, it shaketh.

The righteous rejoiceth that he hath seen vengeance, His steps he washeth in the blood of the wicked.

That thou dost go in the way of the good, And the paths of the righteous dost keep.

and it cometh to pass, when thou hearest the sound of the stepping at the heads of the mulberries, then thou goest out into battle, for God hath gone out before thee to smite the camp of the Philistines.'

In the way of thy sister thou hast walked, And I have given her cup into thy hand.

My people -- its exactors are sucklings, And women have ruled over it. My people -- thy eulogists are causing to err, And the way of thy paths swallowed up.

O depth of riches, and wisdom and knowledge of God! how unsearchable His judgments, and untraceable His ways!