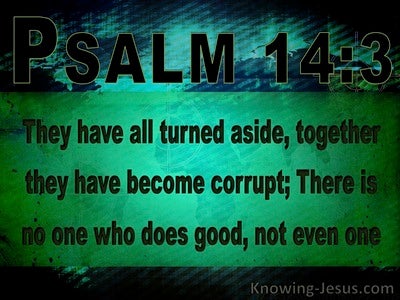 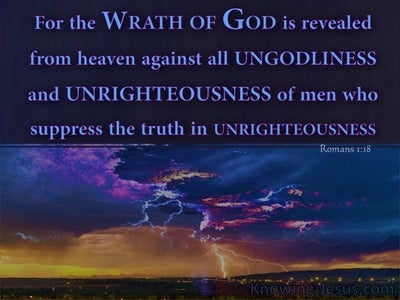 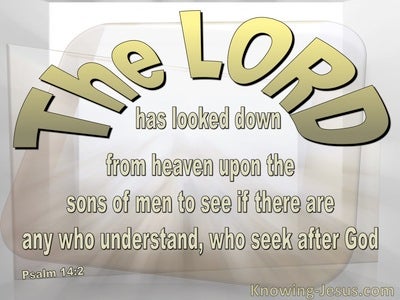 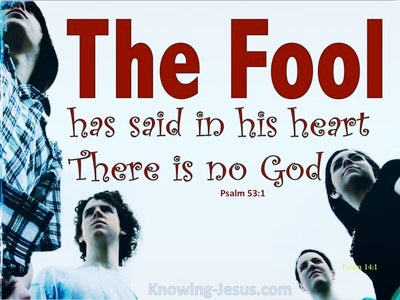 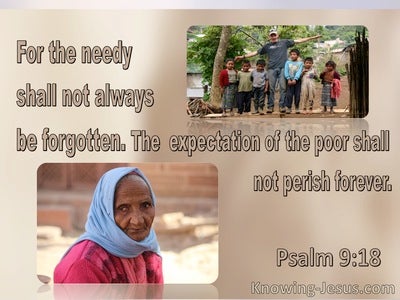 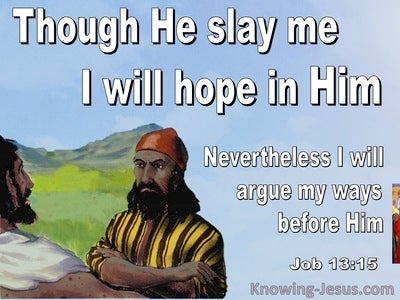 Fools say to themselves, "There is no God." They are corrupt and commit evil deeds; not one of them practices what is good. The LORD looks down from the heavens upon humanity to see if anyone shows discernment as he searches for God. All have turned away, together they have become corrupt; no one practices what is good, not even one.

Fools say to themselves "There is no God." They are corrupt and commit iniquity; not one of them practices what is good. God looks down from the heavens upon humanity to see if anyone shows discernment as he searches for God. All of them have fallen away; together they have become corrupt; no one does what is good, not even one.

"They cry out because they have many oppressors; they cry for help because the powerful are abusing them. He never asks, "Where is God, my Creator, who gives me songs in the night,

With haughty arrogance, the wicked thinks, "God will not seek justice." He always presumes "There is no God." Their ways always seem prosperous. Your judgments are on high, far away from them. They scoff at all their enemies. They say to themselves, "We will not be moved throughout all time, and we will not experience adversity."read more.
Their mouth is full of curses, lies, and oppression, their tongues spread trouble and iniquity. They wait in ambush in the villages, they kill the innocent in secret. Their eyes secretly watch the helpless, lying in wait like a lion in his den. They lie in wait to catch the afflicted. They catch the afflicted when they pull him into their net. The victim is crushed, and he sinks down; the helpless fall by their might. The wicked say to themselves, "God has forgotten, he has hidden his face, he will never see it."

An oracle that came to me about the transgressions of the wicked: There is no fear of God before his eyes. He flatters himself too much to discover his transgression and hate it. The words from his mouth are vain and deceptive. He has abandoned behaving wisely and doing good.read more.
He devises iniquity on his bed and is determined to follow a path that is not good. He does not resist evil.

By what he says, the godless person can destroy his neighbor, but through knowledge the righteous escape.

Indeed, both priest and prophet are ungodly. Even in my house I find evil," declares the LORD. Therefore their way will be slippery. They'll be driven out into the darkness, where they'll fall. For I'll bring disaster on them, the year of their judgment," declares the LORD.

"Can papyrus grow where there's no marsh? Can reeds flourish without water? While they are still green and not yet ready to be harvested, they wither before any plant. Such are the paths of everyone who forgets God the hope of the godless will be destroyed:read more.
his confidence is shattered; his trust is in a spider's web. He leans against his house, but it won't stand; he grabs hold of it firmly, but it doesn't last. He is a fresh sapling planted in the sunlight, spreading out its branches over its garden. Its roots weave around a pile of stones, seeking to entrench itself among the rocks. If he is uprooted from his place, then it will deny him: "I never saw you.' "Indeed, this is the benefit of God's way: from the soil other plants will sprout.

"If he remains silent, who will condemn him? If he conceals his face, who can see him? He watches over both nation and individual alike, to keep the godless man from reigning or laying a snare for the people."

The wicked will turn back to where the dead are all the nations that have forgotten God. For he will not always overlook the plight of the poor, nor will the hope of the afflicted perish forever. Rise up, LORD, do not let man prevail! The nations will be judged in your presence.read more.
Make them afraid, LORD, Let the nations know that they are only human. Interlude

For God's wrath is being revealed from heaven against all the ungodliness and wickedness of those who in their wickedness suppress the truth.

Even though he kills me, I'll continue to hope in him. At least I'll be able to argue my case to his face! I have this as my salvation: the godless person won't be appearing before him.

For the company of the godless is desolation, and fire consumes the tents of those who bribe.

"Haven't you known this from ancient times, since mankind was placed on the earth? The wicked triumph only briefly; the joy of the godless is momentary.

For where is the hope of the godless when he is eliminated; when God takes away his life? Will God hear his cry when distress overtakes him? Will he take delight in the Almighty? Will he call on God at all times?"

"If they're bound in chains, caught in ropes of affliction, he'll reveal their actions to them, when their transgressions have become excessive. He opens their ears and instructs them, commanding them to repent from evil.read more.
If they listen and serve him, they'll finish their lives in prosperity and their years will be pleasant. "But if they won't listen, they'll perish by the sword and die in their ignorance. The godless at heart cherish anger; they won't cry out for help when God afflicts them.

As for the wicked, God says, "How dare you recite my statutes or speak about my covenant with your lips! You hate instruction and toss my words behind you. When you see a thief, you befriend him, and you keep company with adulterers.read more.
You give your mouth free reign for evil, and your tongue devises deceit. You sit and speak against your brother; you slander your own mother's son. These things you did, and I kept silent, because you assumed that I was like you. But now I am going to rebuke you, and I will set forth my case before your very own eyes." Consider this, you who have forgotten God Otherwise, I will tear you in pieces and there will be no deliverer:

I'm sending my fury against a godless nation, and I'll command him against the people with whom I'm angry to seize loot and snatch plunder, and to trample them down like mud in the streets.

Do not have anything to do with godless myths and fables of old women. Instead, train yourself to be godly.

Timothy, guard what has been entrusted to you. Avoid the pointless discussions and contradictions of what is falsely called knowledge. Although some claim to have it, they have abandoned the faith. May grace be with all of you!

In this way, all Israel will be saved, as it is written, "The Deliverer will come from Zion; he will remove ungodliness from Jacob. This is my covenant with them when I take away their sins."