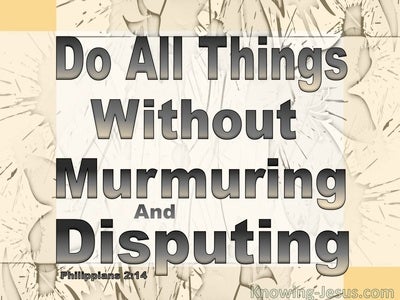 Do all things without grumbling or disputing;

Jesus answered and said to them, “Do not grumble among yourselves.

Be hospitable to one another without complaint.

“How long shall I bear with this evil congregation who are grumbling against Me? I have heard the complaints of the sons of Israel, which they are making against Me.

Nor grumble, as some of them did, and were destroyed by the destroyer.

Do not complain, brethren, against one another, so that you yourselves may not be judged; behold, the Judge is standing right at the door.

But Jesus, conscious that His disciples grumbled at this, said to them, “Does this cause you to stumble?

The whole congregation of the sons of Israel grumbled against Moses and Aaron in the wilderness. The sons of Israel said to them, “Would that we had died by the Lord’s hand in the land of Egypt, when we sat by the pots of meat, when we ate bread to the full; for you have brought us out into this wilderness to kill this whole assembly with hunger.”

A constant dripping on a day of steady rain
And a contentious woman are alike;

The whole congregation of the sons of Israel grumbled against Moses and Aaron in the wilderness. The sons of Israel said to them, “Would that we had died by the Lord’s hand in the land of Egypt, when we sat by the pots of meat, when we ate bread to the full; for you have brought us out into this wilderness to kill this whole assembly with hunger.” Then the Lord said to Moses, “Behold, I will rain bread from heaven for you; and the people shall go out and gather a day’s portion every day, that I may test them, whether or not they will walk in My instruction.read more.
On the sixth day, when they prepare what they bring in, it will be twice as much as they gather daily.” So Moses and Aaron said to all the sons of Israel, “At evening you will know that the Lord has brought you out of the land of Egypt; and in the morning you will see the glory of the Lord, for He hears your grumblings against the Lord; and what are we, that you grumble against us?” Moses said, “This will happen when the Lord gives you meat to eat in the evening, and bread to the full in the morning; for the Lord hears your grumblings which you grumble against Him. And what are we? Your grumblings are not against us but against the Lord.” Then Moses said to Aaron, “Say to all the congregation of the sons of Israel, ‘Come near before the Lord, for He has heard your grumblings.’” It came about as Aaron spoke to the whole congregation of the sons of Israel, that they looked toward the wilderness, and behold, the glory of the Lord appeared in the cloud.

Then Moses said to Korah, “Hear now, you sons of Levi, is it not enough for you that the God of Israel has separated you from the rest of the congregation of Israel, to bring you near to Himself, to do the service of the tabernacle of the Lord, and to stand before the congregation to minister to them; and that He has brought you near, Korah, and all your brothers, sons of Levi, with you? And are you seeking for the priesthood also?read more.
Therefore you and all your company are gathered together against the Lord; but as for Aaron, who is he that you grumble against him?” Then Moses sent a summons to Dathan and Abiram, the sons of Eliab; but they said, “We will not come up. Is it not enough that you have brought us up out of a land flowing with milk and honey to have us die in the wilderness, but you would also lord it over us? Indeed, you have not brought us into a land flowing with milk and honey, nor have you given us an inheritance of fields and vineyards. Would you put out the eyes of these men? We will not come up!” Then Moses became very angry and said to the Lord, “Do not regard their offering! I have not taken a single donkey from them, nor have I done harm to any of them.” Moses said to Korah, “You and all your company be present before the Lord tomorrow, both you and they along with Aaron. Each of you take his firepan and put incense on it, and each of you bring his censer before the Lord, two hundred and fifty firepans; also you and Aaron shall each bring his firepan.” So they each took his own censer and put fire on it, and laid incense on it; and they stood at the doorway of the tent of meeting, with Moses and Aaron. Thus Korah assembled all the congregation against them at the doorway of the tent of meeting. And the glory of the Lord appeared to all the congregation. Then the Lord spoke to Moses and Aaron, saying, “Separate yourselves from among this congregation, that I may consume them instantly.” But they fell on their faces and said, “O God, God of the spirits of all flesh, when one man sins, will You be angry with the entire congregation?” Then the Lord spoke to Moses, saying, “Speak to the congregation, saying, ‘Get back from around the dwellings of Korah, Dathan and Abiram.’” Then Moses arose and went to Dathan and Abiram, with the elders of Israel following him, and he spoke to the congregation, saying, “Depart now from the tents of these wicked men, and touch nothing that belongs to them, or you will be swept away in all their sin.” So they got back from around the dwellings of Korah, Dathan and Abiram; and Dathan and Abiram came out and stood at the doorway of their tents, along with their wives and their sons and their little ones. Moses said, “By this you shall know that the Lord has sent me to do all these deeds; for this is not my doing. If these men die the death of all men or if they suffer the fate of all men, then the Lord has not sent me. But if the Lord brings about an entirely new thing and the ground opens its mouth and swallows them up with all that is theirs, and they descend alive into Sheol, then you will understand that these men have spurned the Lord.” As he finished speaking all these words, the ground that was under them split open; and the earth opened its mouth and swallowed them up, and their households, and all the men who belonged to Korah with their possessions. So they and all that belonged to them went down alive to Sheol; and the earth closed over them, and they perished from the midst of the assembly.

Then the sons of Israel, the whole congregation, came to the wilderness of Zin in the first month; and the people stayed at Kadesh. Now Miriam died there and was buried there. There was no water for the congregation, and they assembled themselves against Moses and Aaron. The people thus contended with Moses and spoke, saying, “If only we had perished when our brothers perished before the Lord!read more.
Why then have you brought the Lord’s assembly into this wilderness, for us and our beasts to die here?

But grumbled in their tents;
They did not listen to the voice of the Lord.