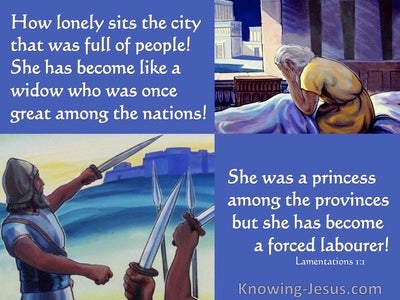 The king chanted a lament for Abner and said,
“Should Abner die as a fool dies?
“Your hands were not bound, nor your feet put in fetters;
As one falls before the wicked, you have fallen.”
And all the people wept again over him.

When they came to the threshing floor of Atad, which is beyond the Jordan, they lamented there with a very great and sorrowful lamentation; and he observed seven days mourning for his father.

Thus says the Lord,
“A voice is heard in Ramah,
Lamentation and bitter weeping.
Rachel is weeping for her children;
She refuses to be comforted for her children,
Because they are no more.”

Then when Herod saw that he had been tricked by the magi, he became very enraged, and sent and slew all the male children who were in Bethlehem and all its vicinity, from two years old and under, according to the time which he had determined from the magi. Then what had been spoken through Jeremiah the prophet was fulfilled: “A voice was heard in Ramah,
Weeping and great mourning,
Rachel weeping for her children;
And she refused to be comforted,
Because they were no more.”

They *came to the house of the synagogue official; and He *saw a commotion, and people loudly weeping and wailing.

Now they were all weeping and lamenting for her; but He said, “Stop weeping, for she has not died, but is asleep.”

And following Him was a large crowd of the people, and of women who were mourning and lamenting Him.

Then the Jews who were with her in the house, and consoling her, when they saw that Mary got up quickly and went out, they followed her, supposing that she was going to the tomb to weep there. Therefore, when Mary came where Jesus was, she saw Him, and fell at His feet, saying to Him, “Lord, if You had been here, my brother would not have died.” When Jesus therefore saw her weeping, and the Jews who came with her also weeping, He was deeply moved in spirit and was troubled,

A Prayer of the Afflicted when he is faint and pours out his complaint before the Lord.
Hear my prayer, O Lord!
And let my cry for help come to You.
Do not hide Your face from me in the day of my distress;
Incline Your ear to me;
In the day when I call answer me quickly.

Then Jeremiah chanted a lament for Josiah. And all the male and female singers speak about Josiah in their lamentations to this day. And they made them an ordinance in Israel; behold, they are also written in the Lamentations.

Then David chanted with this lament over Saul and Jonathan his son, and he told them to teach the sons of Judah the song of the bow; behold, it is written in the book of Jashar. “Your beauty, O Israel, is slain on your high places!
How have the mighty fallen!
read more.
“Tell it not in Gath,
Proclaim it not in the streets of Ashkelon,
Or the daughters of the Philistines will rejoice,
The daughters of the uncircumcised will exult.
“O mountains of Gilboa,
Let not dew or rain be on you, nor fields of offerings;
For there the shield of the mighty was defiled,
The shield of Saul, not anointed with oil.
“From the blood of the slain, from the fat of the mighty,
The bow of Jonathan did not turn back,
And the sword of Saul did not return empty.
“Saul and Jonathan, beloved and pleasant in their life,
And in their death they were not parted;
They were swifter than eagles,
They were stronger than lions.
“O daughters of Israel, weep over Saul,
Who clothed you luxuriously in scarlet,
Who put ornaments of gold on your apparel.
“How have the mighty fallen in the midst of the battle!
Jonathan is slain on your high places.
“I am distressed for you, my brother Jonathan;
You have been very pleasant to me.
Your love to me was more wonderful
Than the love of women.
“How have the mighty fallen,
And the weapons of war perished!”

Hear this word which I take up for you as a dirge, O house of Israel:
She has fallen, she will not rise again—
The virgin Israel.
She lies neglected on her land;
There is none to raise her up.

How lonely sits the city
That was full of people!
She has become like a widow
Who was once great among the nations!
She who was a princess among the provinces
Has become a forced laborer!

Now it will come about that instead of sweet perfume there will be putrefaction;
Instead of a belt, a rope;
Instead of well-set hair, a plucked-out scalp;
Instead of fine clothes, a donning of sackcloth;
And branding instead of beauty.
Your men will fall by the sword
And your mighty ones in battle.
And her gates will lament and mourn,
And deserted she will sit on the ground.

Woe, O Ariel, Ariel the city where David once camped!
Add year to year, observe your feasts on schedule.
I will bring distress to Ariel,
And she will be a city of lamenting and mourning;
And she will be like an Ariel to me.

“A lion has gone up from his thicket,
And a destroyer of nations has set out;
He has gone out from his place
To make your land a waste.
Your cities will be ruins
Without inhabitant.
“For this, put on sackcloth,
Lament and wail;
For the fierce anger of the Lord
Has not turned back from us.”

‘Cut off your hair and cast it away,
And take up a lamentation on the bare heights;
For the Lord has rejected and forsaken
The generation of His wrath.’

“For the mountains I will take up a weeping and wailing,
And for the pastures of the wilderness a dirge,
Because they are laid waste so that no one passes through,
And the lowing of the cattle is not heard;
Both the birds of the sky and the beasts have fled; they are gone.

Then I looked, and behold, a hand was extended to me; and lo, a scroll was in it. When He spread it out before me, it was written on the front and back, and written on it were lamentations, mourning and woe.

Therefore I will weep bitterly for Jazer, for the vine of Sibmah;
I will drench you with my tears, O Heshbon and Elealeh;
For the shouting over your summer fruits and your harvest has fallen away.
Gladness and joy are taken away from the fruitful field;
In the vineyards also there will be no cries of joy or jubilant shouting,
No treader treads out wine in the presses,
For I have made the shouting to cease.
Therefore my heart intones like a harp for Moab
And my inward feelings for Kir-hareseth.

My heart cries out for Moab;
His fugitives are as far as Zoar and Eglath-shelishiyah,
For they go up the ascent of Luhith weeping;
Surely on the road to Horonaim they raise a cry of distress over their ruin.

Therefore Moab will wail; everyone of Moab will wail.
You will moan for the raisin cakes of Kir-hareseth
As those who are utterly stricken.

And the fishermen will lament,
And all those who cast a line into the Nile will mourn,
And those who spread nets on the waters will pine away.

They will take up a lamentation over you and say to you,
‘How you have perished, O inhabited one,
From the seas, O renowned city,
Which was mighty on the sea,
She and her inhabitants,
Who imposed her terror
On all her inhabitants!
‘Now the coastlands will tremble
On the day of your fall;
Yes, the coastlands which are by the sea
Will be terrified at your passing.’”

“Son of man, prophesy and say, ‘Thus says the Lord God,
“Wail, ‘Alas for the day!’
“For the day is near,
Even the day of the Lord is near;
It will be a day of clouds,
A time of doom for the nations.
“A sword will come upon Egypt,
And anguish will be in Ethiopia;
When the slain fall in Egypt,
They take away her wealth,
And her foundations are torn down.

Her adversaries have become her masters,
Her enemies prosper;
For the Lord has caused her grief
Because of the multitude of her transgressions;
Her little ones have gone away
As captives before the adversary.

Why should any living mortal, or any man,
Offer complaint in view of his sins?
Let us examine and probe our ways,
And let us return to the Lord.

that the daughters of Israel went yearly to commemorate the daughter of Jephthah the Gileadite four days in the year.

Then David chanted with this lament over Saul and Jonathan his son,

When Mordecai learned all that had been done, he tore his clothes, put on sackcloth and ashes, and went out into the midst of the city and wailed loudly and bitterly.

“A voice was heard in Ramah,
Weeping and great mourning,
Rachel weeping for her children;
And she refused to be comforted,
Because they were no more.”

Some devout men buried Stephen, and made loud lamentation over him.

“For this, put on sackcloth,
Lament and wail;
For the fierce anger of the Lord
Has not turned back from us.”

O daughter of my people, put on sackcloth
And roll in ashes;
Mourn as for an only son,
A lamentation most bitter.
For suddenly the destroyer
Will come upon us.

“As for you, take up a lamentation for the princes of Israel

Wail like a virgin girded with sackcloth
For the bridegroom of her youth.

Hear this word which I take up for you as a dirge, O house of Israel:

“On that day they will take up against you a taunt
And utter a bitter lamentation and say,
‘We are completely destroyed!
He exchanges the portion of my people;
How He removes it from me!
To the apostate He apportions our fields.’