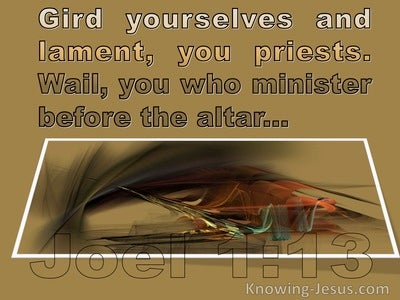 And Jacob rendeth his raiment, and putteth sackcloth on his loins, and becometh a mourner for his son many days,

And David saith unto Joab, and unto all the people who are with him, 'Rend your garments, and gird on sackcloth, and mourn before Abner;' and king David is going after the bier.

Sackcloth I have sewed on my skin, And have rolled in the dust my horn.

Therefore do I loathe it, And I have repented on dust and ashes.

Sit on the earth -- keep silent do the elders of the daughter of Zion, They have caused dust to go up on their head, They have girded on sackcloth, Put down to the earth their head have the virgins of Jerusalem.

Wail, as a virgin girdeth with sackcloth, For the husband of her youth.

And it cometh to pass, at Ahab's hearing these words, that he rendeth his garments, and putteth sackcloth on his flesh, and fasteth, and lieth in sackcloth, and goeth gently.

and David lifteth up his eyes, and seeth the messenger of Jehovah standing between the earth and the heavens, and his sword drawn in his hand, stretched out over Jerusalem, and David falleth, and the elders, covered with sackcloth, on their faces.

And in the twenty and fourth day of this month have the sons of Israel been gathered, with fasting, and with sackcloth, and earth upon them;

And the men of Nineveh believe in God, and proclaim a fast, and put on sackcloth, from their greatest even unto their least, seeing the word doth come unto the king of Nineveh, and he riseth from his throne, and removeth his honourable robe from off him, and spreadeth out sackcloth, and sitteth on the ashes, and he crieth and saith in Nineveh by a decree of the king and his great ones, saying, 'Man and beast, herd and flock -- let them not taste anything, let them not feed, even water let them not drink;read more.
and cover themselves with sackcloth let man and beast, and let them call unto God mightily, and let them turn back each from his evil way, and from the violence that is in their hands. Who knoweth? He doth turn back, and God hath repented, and hath turned back from the heat of His anger, and we do not perish.'

In its out-places they girded on sackcloth, On its pinnacles, and in its broad places, Every one howleth -- going down with weeping.

Howl, Heshbon, for spoiled is Ai, Cry, daughters of Rabbah, gird on sackcloth, Lament, and go to and fro by the hedges, For Malcam into captivity doth go, His priests and his princes together.

'Woe to thee, Chorazin! woe to thee, Bethsaida! because, if in Tyre and Sidon had been done the mighty works that were done in you, long ago in sackcloth and ashes they had reformed;

'Woe to thee, Chorazin; woe to thee, Bethsaida; for if in Tyre and Sidon had been done the mighty works that were done in you, long ago, sitting in sackcloth and ashes, they had reformed;

And it cometh to pass, at king Hezekiah's hearing, that he rendeth his garments, and covereth himself with sackcloth, and entereth the house of Jehovah, and sendeth Eliakim, who is over the house, and Shebna the scribe, and the elders of the priests, covering themselves with sackcloth, unto Isaiah the prophet, son of Amoz,

and I set my face unto the Lord God, to seek by prayer and supplications, with fasting, and sackcloth, and ashes.

And his servants say unto him, 'Lo, we pray thee, we have heard that the kings of the house of Israel -- that they are kind kings; let us put, we pray thee, sackcloth on our loins, and ropes on our heads, and we go out unto the king of Israel; it may be he doth keep thee alive.'

And it cometh to pass, at the king's hearing the words of the woman, that he rendeth his garments, and he is passing by on the wall, and the people see, and lo, the sackcloth is on his flesh within.

Like this is the fast that I choose? The day of a man's afflicting his soul? To bow as a reed his head, And sackcloth and ashes spread out? This dost thou call a fast, And a desirable day -- to Jehovah?

Gird, and lament, ye priests, Howl, ye ministrants of the altar, Come in, lodge in sackcloth, ministrants of my God, For withheld from the house of your God hath been present and libation.

I clothe the heavens with blackness, And sackcloth I make their covering.