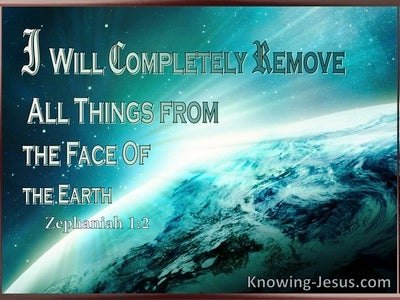 Exodus 23:29
Verse Concepts
The Lord Will Drive Them OutlandGrowth Of Evil
One YearWild Beasts SubduedBeing Single

I won't drive them out before you in a single year, so that the land does not become desolate and so that wild animals do not overrun you.

and dedicate the land to desolation because of their unfaithful unbelief," declares the Lord GOD.

Be warned, Jerusalem, or I'll be alienated from you. I'll make you desolate, a land not inhabited."

Fields will be bought in this land about which you will say, "It is a desolate place without people or animals. It is given into the hands of the Chaldeans."

"This is what the LORD says: "You are saying about this place, "It is a ruin without people and without animals." Yet in the cities of Judah and the streets of Jerusalem which are desolate places without inhabitants and without animals, there will again be heard

Jeremiah 33:12
Verse Concepts
Both Men And Animals Affected
Those Who Kept Stock

"This is what the LORD of the Heavenly Armies says: "In this place that is now a ruin without people or animals, and in all its towns there will again be pasture for shepherds resting their flocks.

"If I were to make wild animals pass throughout the land, so that they kill its residents and it were to become desolate because no one will travel through it due to those wild animals,

Concerning Jehoiakim, king of Judah, you are to say, "This is what the LORD says: "You burned this scroll, all the while saying, "Why did you write on it that the king of Babylon will definitely come, destroy this land, and eliminate both people and animals from it?'"

Just like the overthrow of Sodom and Gomorrah and their neighbors," says the LORD, "no one will live there. No human being will reside in it.

I will turn you into an everlasting wasteland, and your cities will never be inhabited. Then you'll learn that I am the LORD!

"Hazor will become a dwelling place for jackals, a perpetual wasteland. No one will live there; no human being will reside in it."

I'm turning Mount Seir over to ruin and desolation. I'm going to eliminate everyone who comes and goes,

I'll dry up their waterways, and evil men will sell off the land. I'm going to make that land desolate, along with everything that's in it, and I'm going to use foreigners to do it. I, the LORD have spoken!'"

Neither man nor beast will walk through that area. It won't even be inhabited for 40 years.

and the land of Egypt will be turned into a desolate ruin. Then you will know that I am the LORD. Because Egypt said, "The Nile is mine. I made it!"

therefore watch out! I'm coming to get you! I'm going to attack your waterways, and then I'm going to make the land of Egypt a total wasteland from the Aswan fortress to the border of Ethiopia!

The land will become desolate because of its inhabitants, and as a result of their behavior.

Watch out! The Day of the LORD is coming cruel, with wrath and fierce anger to turn the entire inhabited earth into a desolation and to annihilate sinners from it.

However, before the youth knows enough to reject what's wrong and choose what's right, the land whose two kings you dread will be devastated."

It will burn night and day, and will never be extinguished. Its smoke will rise from generation to generation, and it will lie desolate forever and ever. And no one will pass through it.

I looked, and no people were there. All the birds of the sky had gone.

I'll weep and mourn for the mountains, and lament for the desert pastures, because they are desolate and no one passes through them. They don't hear the lowing of the cattle. Both the birds of the sky and the animals have fled. They're gone!

Ezekiel 33:28
Verse Concepts
The Proud Will Be AbasedThe Mountains Of Israel
Destruction Of CountriesHer Strength

Then I'll turn the land into a desolate ruin and her arrogant strength will come to an abrupt end. The mountains of Israel will become so desolate that no one will be able to travel over them."

"I'll utterly sweep away everything from the land," declares the LORD.

"I will scatter them to all of the nations, which they have not known.'" Now the earth was left desolate after them. As a result, no one came or went because they had turned a pleasant land into a desert.