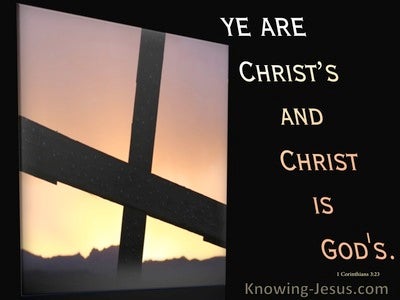 because in him doth tabernacle all the fulness of the Godhead bodily,

So then, let no one glory in men, for all things are yours,

And Moses saith unto God, 'Who am I, that I go unto Pharaoh, and that I bring out the sons of Israel from Egypt?'

And he saith unto him, 'O, my lord, wherewith do I save Israel? lo, my chief is weak in Manasseh, and I the least in the house of my father.'

And it came to pass in those days, he went forth to the mountain to pray, and was passing the night in the prayer of God, and when it became day, he called near his disciples, and having chosen from them twelve, whom also he named apostles, (Simon, whom also he named Peter, and Andrew his brother, James and John, Philip and Bartholomew,read more.
Matthew and Thomas, James of Alphaeus, and Simon called Zelotes, Judas of James, and Judas Iscariot, who also became betrayer;)

Brethren, if a man also may be overtaken in any trespass, ye who are spiritual restore such a one in a spirit of meekness, considering thyself -- lest thou also may be tempted;

neither as exercising lordship over the heritages, but patterns becoming of the flock,

Be obedient to those leading you, and be subject, for these do watch for your souls, as about to give account, that with joy they may do this, and not sighing, for this is unprofitable to you.

Thy princes are apostates, and companions of thieves, Every one loving a bribe, and pursuing rewards, The fatherless they judge not, And the plea of the widow cometh not to them.

And we ask you, brethren, to know those labouring among you, and leading you in the Lord, and admonishing you,

even as the Son of Man did not come to be ministered to, but to minister, and to give his life a ransom for many.'

but not so shall it be among you; but whoever may will to become great among you, he shall be your minister,

The hand of the diligent ruleth, And slothfulness becometh tributary.

Leadership » Of the spirit » Obedience to, a mark of sonship

for as many as are led by the Spirit of God, these are the sons of God;

and if by the Spirit ye are led, ye are not under law.

Leadership » Of the spirit » Guides into all truth

and when He may come -- the Spirit of truth -- He will guide you to all the truth, for He will not speak from Himself, but as many things as He will hear He will speak, and the coming things He will tell you;

and when they came up out of the water, the Spirit of the Lord caught away Philip, and the eunuch saw him no more, for he was going on his way rejoicing;

Leadership » Of the spirit » Controls the movements of believers

And Peter thinking about the vision, the Spirit said to him, 'Lo, three men do seek thee; but having risen, go down and go on with them, nothing doubting, because I have sent them;'

Leadership » Of the spirit » Directs in the selection of Christian leaders

Leadership » Of the spirit » Chooses the fields of operation

Acts 16:6
Verse Concepts
evangelists, ministry ofInspiration Of The Holy Spirit, Purpose OfProvinces
The Holy Spirit In The ChurchLed By The SpiritMissionaries

and having gone through Phrygia and the region of Galatia, having been forbidden by the Holy Spirit to speak the word in Asia,

All my bones say, 'Jehovah, who is like Thee, Delivering the poor from the stronger than he, And the poor and needy from his plunderer.'

Give for yourselves men, wise and intelligent, and known to your tribes, and I set them for your heads;

And the greater of you shall be your ministrant,