19 Bible Verses about Light In The World 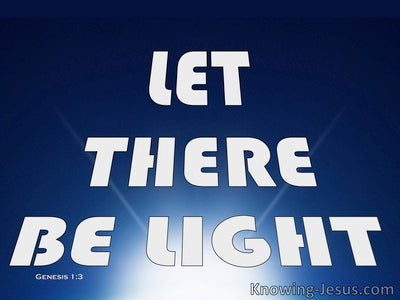 And God said, Let there be light, and there was light.

Genesis 1:17
Verse Concepts
Expanse [The Firmament]Putting In Order
The Expanse

and to rule over the day and over the night and to divide the light from the darkness; and God saw that it was good.

And God called the light Day and the darkness he called Night. And the evening and the morning were the first day.

and let them be for lights in the firmament of the heavens to give light upon the earth; and it was so.

Is there any number to his armies? And upon whom does his light not arise?

The poor and the usurer meet together; the LORD lightens both their eyes.

They did not see one another, neither did any rise from his place for three days; but all the sons of Israel had light in their dwellings.

Exodus 14:20
Verse Concepts
Camping During The ExodusStanding At A DistanceComing Between
Light, NaturalDivine Protection, Examples Of

And it came between the camp of the Egyptians and the camp of Israel; and it was a cloud and darkness to them, but it lit up the night unto Israel; and all that night the one side never came near the other.

yet thou in thy manifold mercies didst not forsake them in the wilderness; the pillar of the cloud did not depart from them by day, to lead them in the way; neither did the pillar of fire by night, to illuminate the way in which they should go.

And as he proceeded, he came near Damascus; and suddenly there shone round about him a light from heaven;

And it came to pass that, as I made my journey and was come near unto Damascus about noon, suddenly there shone from heaven a great light round about me.

at midday, O king, I saw in the way a light from heaven, above the brightness of the sun, shining round about me and those who journeyed with me.

The voice of thy thunder was all around; the lightnings lightened the world; the earth trembled and shook.

His lightnings enlightened the world; the earth saw and trembled.

but it shall be one day which is known to the LORD, not day, nor night; but it shall come to pass, that at evening time there shall be light.