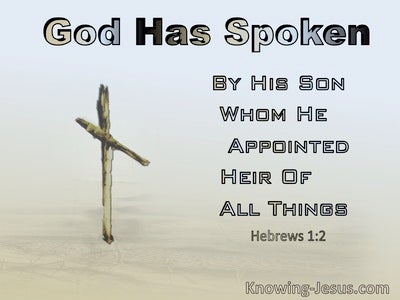 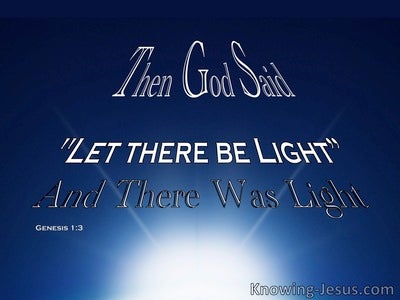 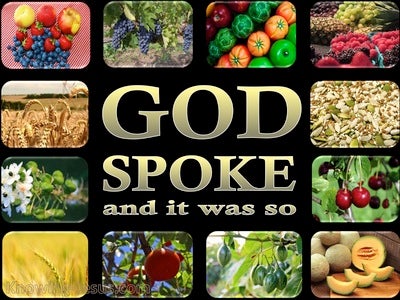 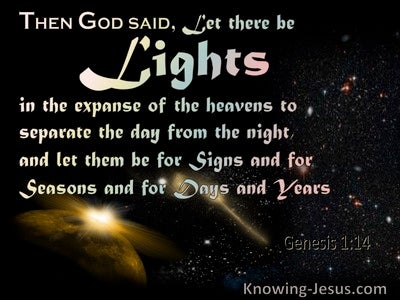 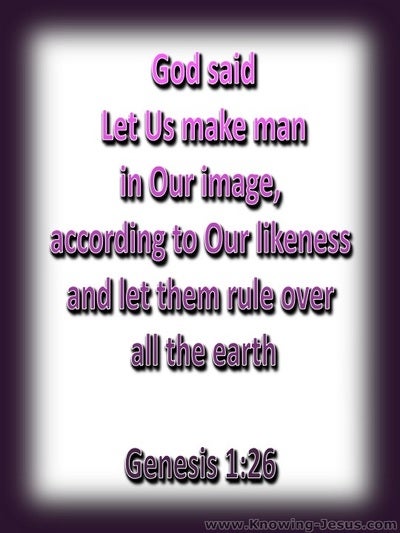 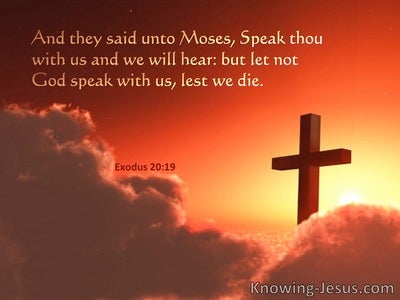 And God said, Let there be light, and there was light.

And God said, Let there be a firmament in the midst of the waters, and let it divide the waters from the waters.

And God said, Let the waters under the heavens be gathered together unto one place, and let the dry land appear; and it was so.

And God said, Let the earth bring forth green grass, herb yielding seed, and the fruit tree yielding fruit after its nature, whose seed is in itself upon the earth; and it was so.

And God said, Let there be lights in the firmament of the heavens to divide the day from the night; and let them be for signs and for appointed times and for days and years;

And God said, Let the waters bring forth great quantities of creatures with living souls and fowl that may fly above the earth upon the face of the firmament of the heavens.

And God said, Let us make man in our image, after our likeness; and let them have dominion over the fish of the sea and over the fowl of the air and over the beasts and over all the earth and over every serpent that moves upon the earth.

The God of gods, even the LORD, has spoken and convocated the earth from the rising of the sun unto the going down thereof.

Because I, the LORD, will speak, and the word that I shall speak shall come to pass; it shall no longer be prolonged, for in your days, O rebellious house, I will speak the word and will perform it, said the Lord GOD.

And the LORD said unto Moses, Thus thou shalt say unto the sons of Israel, Ye have seen that I have talked with you from heaven.

And God spoke unto Noah, saying,

And God spoke unto Noah and to his sons with him, saying,

And the LORD would speak unto Moses face to face, as anyone would speak unto their friend. And he would turn again into the camp, but his servant Joshua, the son of Nun, a young man, did not depart out of the tabernacle.

We know that God spoke unto Moses; as for this fellow, we do not know where he is from.

This shall be a continual burnt offering throughout your ages at the door of the tabernacle of the testimony before the LORD, where I will concert with you, to speak there unto you.

And there I will meet with thee, and I will speak with thee from above the seat of reconciliation, from between the two cherubim which are upon the ark of the testimony, of all things which I will give thee in commandment unto the sons of Israel.

He spoke unto them in the pillar of fire; they kept his testimonies and the order that he gave them.

For he commands and raises the stormy wind, which lifts up its waves.

And spirit entered into me when he spoke unto me and set me upon my feet, and I heard him that spoke unto me.

And the hand of the LORD came upon me there; and he said unto me, Arise, go forth into the plain, and I will talk with thee there.

Ezekiel 2:1
Verse Concepts
Get Up!
Son Of Man

And he said unto me, Son of man, stand upon thy feet, and I will speak with thee.

Then should my comfort grow; I would hold on to sorrow without mercy; for I have not contradicted the words of the Holy One.

But oh, that God would speak and open his lips against thee

yea, he dominated the angel and prevailed; he wept and made supplication unto him; he found him in Bethel, and there he spoke with us;

and the LORD shall utter his voice before his army: for many are his camps and strong, that execute his word; for the day of the LORD is great, and very terrible; and who can abide it?

The LORD also shall roar out of Zion and utter his voice from Jerusalem; and the heavens and the earth shall shake; but the LORD will be the hope of his people and the strength of the sons of Israel.

The lion has roared, who will not fear? the Lord GOD has spoken, who can but prophesy?

And he said, The LORD will roar from Zion and utter his voice from Jerusalem; and the habitations of the pastors shall be destroyed, and the top of Carmel shall wither.

has in these last times spoken unto us by his Son, whom he has appointed heir of all things, by whom also he made the ages;

Nevertheless, in one or two manners God speaks to the one who does not see. In a dream, in a vision of the night, when deep sleep falls upon men, in slumberings upon the bed; then he opens the ears of men and seals their instruction,

And they said unto Moses, Speak thou with us, and we will hear; but let not God speak with us lest we die.

And God went up from him in the place where he talked with him.

and the sound of a trumpet and the voice of words, which voice those that heard intreated that the word should not be spoken to them any more;

whom it is certainly necessary that the heaven must receive until the times of restitution of all things, which God has spoken by the mouth of all his holy prophets since the age began.

Hebrews 1:1
Verse Concepts
Prophecy, Inspiration Of OtProphecy, Methods Of OtInspiration Of The Holy Spirit, Means OfGod Speaking Of OldGod Spoke By The Prophets
Revelation Through ProphetsProphecyAccess to Godpast

God, having spoken many times and in many ways in time past unto the fathers by the prophets,