29 Bible Verses about Looking And Seeing 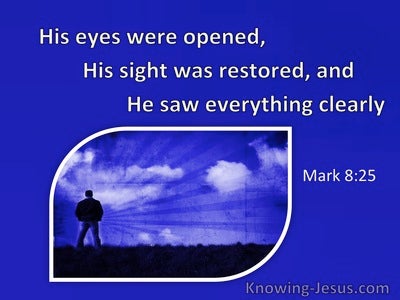 Looking around and seeing no one else, he killed the Egyptian and hid him in the sand.

After Lot had separated from Abram, the LORD told Abram, "Look off to the north, south, east, and west from where you're living,

Then the LORD took him outside. "Look up at the sky and count the stars if you can!" he said. "Your descendants will be that numerous."

Then he told his young servant, "Go and look toward the sea." So he went and looked out to sea. "Nothing there," he said.

"Look out at the nations and pay attention! Be astounded! Be really astounded! Because something is happening in your lifetime that you won't believe, even if it were described down to the smallest detail.

So they took two chariots and horses, and the king sent them out after the Aramean army with the orders, "Go and look!"

Then he told me, "Go on through that entrance, so you may see the wicked, detestable things that they're committing here."

This is what the man told me: "Son of Man, watch carefully, listen closely, and remember everything I'm going to be showing you, because you've been brought here to be shown what you're about to see. Be sure that you tell the house of Israel everything that you observe."

Then the angel who had been talking with me stepped forward and told me, "Please look up and see what's going out."

Then he asked me, "Do you see this, Son of Man? You're about to see even more detestable practices than these."

"Do you see this, Son of Man?" he asked me. "Is it an insignificant thing for Judah's house to commit the detestable things that they're doing here? They've filled the land with violence and turned away from me, causing me to become angry again. Look how they're sniffing with their noses!

Then, as he was bringing me back along the river bank, he asked me, "Son of Man, did you see all of this?"

the Spirit asked me, "Do you see, Son of Man, what the elders of Israel's house are doing in secret, each in the chamber of his own carved idol? They keep saying, "God doesn't see us. The LORD has abandoned the land.'"

This message from the LORD came to me, asking, "What do you see, Jeremiah?" I replied, "I see an almond branch."

And the LORD was asking me, "What do you see, Amos?" I replied, "A plumb line." So the Lord said, "Look, I have set a plumb line in the midst of my people Israel. I will no longer spare them.

And he was asking, "What do you see, Amos?" I answered, "A basket of summer fruit." Then the LORD told me, "The end approaches for my people Israel. I will no longer spare them.

Genesis 20:10
Verse Concepts
What Do You Do?

Abimelech also asked Abraham, "What could you have been thinking when you did this?"

"What did they see in your palace?" he asked. "They saw everything in my palace," Hezekiah replied. "There is nothing in my treasuries that I did not show them."

As they were leaving, Jesus began to speak to the crowds about John. "What did you go out into the wilderness to see? A reed shaken by the wind?

For from a window in my house I peered through the lattice work,

So the people went out to see what had happened. When they came to Jesus and found the man from whom the demons had gone out sitting at Jesus' feet, dressed and in his right mind, they were frightened.

Luke 8:34
Verse Concepts
Telling Of JesusStock Keeping
Others Who Fled

Now when those who had been taking care of the pigs saw what had happened, they ran away and reported it in the city and in the countryside.

When the angels had left them and gone back to heaven, the shepherds told one another, "Let's go to Bethlehem and see what has taken place that the Lord has told us about."

Mark 5:32
Verse Concepts
Who Is The Doer?

But he kept looking around to look at the woman who had done this.

Then Jesus placed his hands on the man's eyes again, and he saw clearly. His sight was restored, and he saw everything perfectly, even from a distance.

Then Jesus went into Jerusalem and into the Temple and looked around at everything. Since it was already late, he went out with the Twelve to Bethany.