16 Bible Verses about Martyrdom, Reasons For 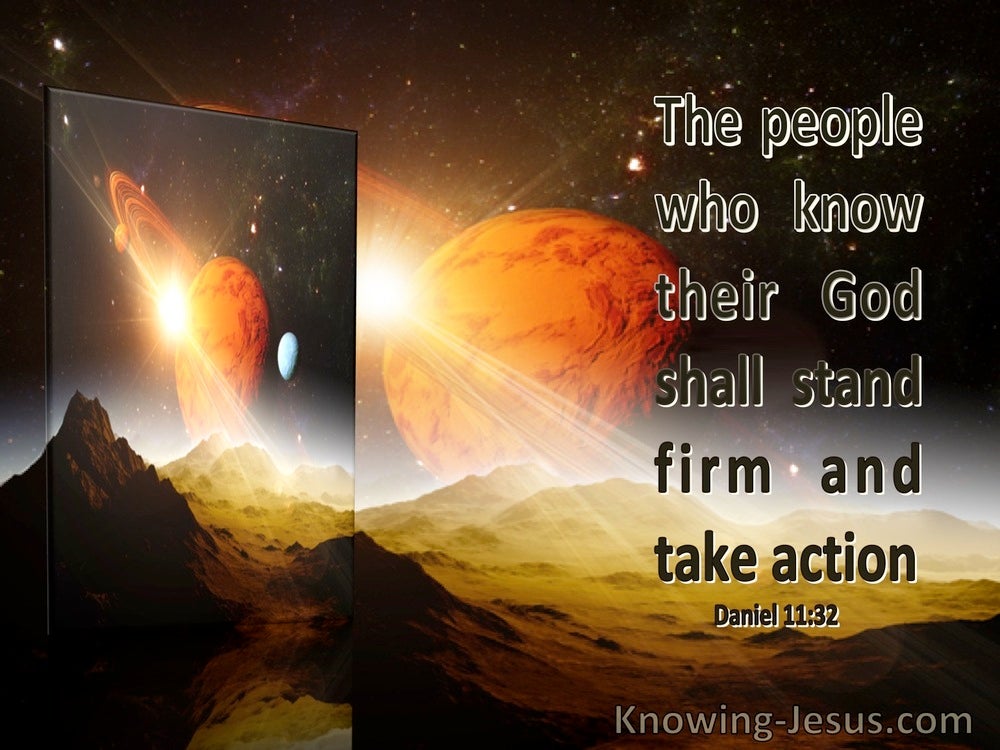 But whoever does not fall down and worship shall immediately be cast into the midst of a furnace of blazing fire.”

Shadrach, Meshach and Abed-nego replied to the king, “O Nebuchadnezzar, we do not need to give you an answer concerning this matter. If it be so, our God whom we serve is able to deliver us from the furnace of blazing fire; and He will deliver us out of your hand, O king. But even if He does not, let it be known to you, O king, that we are not going to serve your gods or worship the golden image that you have set up.”

All the commissioners of the kingdom, the prefects and the satraps, the high officials and the governors have consulted together that the king should establish a statute and enforce an injunction that anyone who makes a petition to any god or man besides you, O king, for thirty days, shall be cast into the lions’ den.

For ships of Kittim will come against him; therefore he will be disheartened and will return and become enraged at the holy covenant and take action; so he will come back and show regard for those who forsake the holy covenant. Forces from him will arise, desecrate the sanctuary fortress, and do away with the regular sacrifice. And they will set up the abomination of desolation. By smooth words he will turn to godlessness those who act wickedly toward the covenant, but the people who know their God will display strength and take action.read more.
Those who have insight among the people will give understanding to the many; yet they will fall by sword and by flame, by captivity and by plunder for many days.

“But they became disobedient and rebelled against You,
And cast Your law behind their backs
And killed Your prophets who had admonished them
So that they might return to You,
And they committed great blasphemies.

and said to his servants, “This is John the Baptist; he has risen from the dead, and that is why miraculous powers are at work in him.” For when Herod had John arrested, he bound him and put him in prison because of Herodias, the wife of his brother Philip. For John had been saying to him, “It is not lawful for you to have her.”read more.
Although Herod wanted to put him to death, he feared the crowd, because they regarded John as a prophet. But when Herod’s birthday came, the daughter of Herodias danced before them and pleased Herod, so much that he promised with an oath to give her whatever she asked. Having been prompted by her mother, she *said, “Give me here on a platter the head of John the Baptist.” Although he was grieved, the king commanded it to be given because of his oaths, and because of his dinner guests. He sent and had John beheaded in the prison. And his head was brought on a platter and given to the girl, and she brought it to her mother. His disciples came and took away the body and buried it; and they went and reported to Jesus.

For Herod himself had sent and had John arrested and bound in prison on account of Herodias, the wife of his brother Philip, because he had married her. For John had been saying to Herod, “It is not lawful for you to have your brother’s wife.” Herodias had a grudge against him and wanted to put him to death and could not do so;read more.
for Herod was afraid of John, knowing that he was a righteous and holy man, and he kept him safe. And when he heard him, he was very perplexed; but he used to enjoy listening to him. A strategic day came when Herod on his birthday gave a banquet for his lords and military commanders and the leading men of Galilee; and when the daughter of Herodias herself came in and danced, she pleased Herod and his dinner guests; and the king said to the girl, “Ask me for whatever you want and I will give it to you.” And he swore to her, “Whatever you ask of me, I will give it to you; up to half of my kingdom.” And she went out and said to her mother, “What shall I ask for?” And she said, “The head of John the Baptist.” Immediately she came in a hurry to the king and asked, saying, “I want you to give me at once the head of John the Baptist on a platter.” And although the king was very sorry, yet because of his oaths and because of his dinner guests, he was unwilling to refuse her. Immediately the king sent an executioner and commanded him to bring back his head. And he went and had him beheaded in the prison, and brought his head on a platter, and gave it to the girl; and the girl gave it to her mother. When his disciples heard about this, they came and took away his body and laid it in a tomb.

“You men who are stiff-necked and uncircumcised in heart and ears are always resisting the Holy Spirit; you are doing just as your fathers did. Which one of the prophets did your fathers not persecute? They killed those who had previously announced the coming of the Righteous One, whose betrayers and murderers you have now become; you who received the law as ordained by angels, and yet did not keep it.”read more.
Now when they heard this, they were cut to the quick, and they began gnashing their teeth at him. But being full of the Holy Spirit, he gazed intently into heaven and saw the glory of God, and Jesus standing at the right hand of God; and he said, “Behold, I see the heavens opened up and the Son of Man standing at the right hand of God.” But they cried out with a loud voice, and covered their ears and rushed at him with one impulse. When they had driven him out of the city, they began stoning him; and the witnesses laid aside their robes at the feet of a young man named Saul.

When they have finished their testimony, the beast that comes up out of the abyss will make war with them, and overcome them and kill them. And their dead bodies will lie in the street of the great city which mystically is called Sodom and Egypt, where also their Lord was crucified. Those from the peoples and tribes and tongues and nations will look at their dead bodies for three and a half days, and will not permit their dead bodies to be laid in a tomb.read more.
And those who dwell on the earth will rejoice over them and celebrate; and they will send gifts to one another, because these two prophets tormented those who dwell on the earth.

Brother will betray brother to death, and a father his child; and children will rise up against parents and have them put to death. You will be hated by all because of My name, but the one who endures to the end, he will be saved.

But you will be betrayed even by parents and brothers and relatives and friends, and they will put some of you to death, and you will be hated by all because of My name.

not as Cain, who was of the evil one and slew his brother. And for what reason did he slay him? Because his deeds were evil, and his brother’s were righteous.

Revelation 17:5
Verse Concepts
The judgment of babylonwhoresBabylonArmageddonWriting On People
America In Biblical ProphecyForeheadsCondemnation Of BabylonSpiritual Mothers

and on her forehead a name was written, a mystery, “BABYLON THE GREAT, THE MOTHER OF HARLOTS AND OF THE ABOMINATIONS OF THE EARTH.”