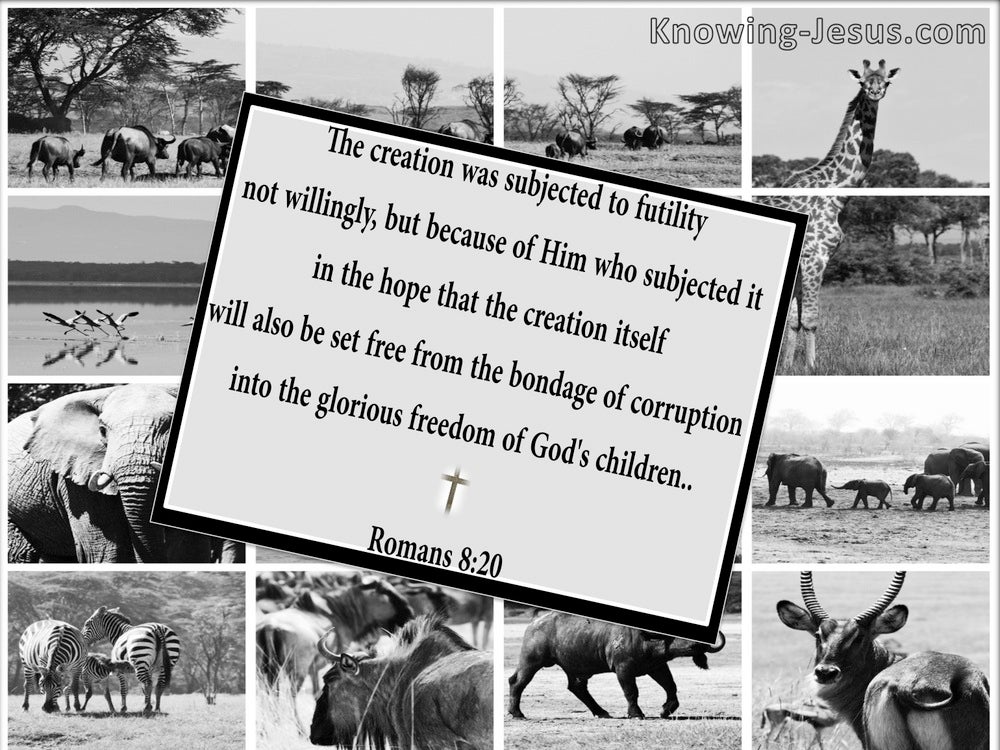 Romans 8:20
Verse Concepts
The Universe AffectedliberationNot My Will But God's
Useless EndeavourAgriculture, Effects Of FallDecay

For the creation was subjected to futility, not willingly, but because of Him who subjected it, in hope

A tranquil heart is life to the body,
But passion is rottenness to the bones.

Therefore we do not lose heart, but though our outer man is decaying, yet our inner man is being renewed day by day.

And I answered the second time and said to him, “What are the two olive branches which are beside the two golden pipes, which empty the golden oil from themselves?”

An excellent wife is the crown of her husband,
But she who shames him is like rottenness in his bones.

So I will tear down the wall which you plastered over with whitewash and bring it down to the ground, so that its foundation is laid bare; and when it falls, you will be consumed in its midst. And you will know that I am the Lord.

that, in reference to your former manner of life, you lay aside the old self, which is being corrupted in accordance with the lusts of deceit,

“You are the salt of the earth; but if the salt has become tasteless, how can it be made salty again? It is no longer good for anything, except to be thrown out and trampled under foot by men.

I have also spoken to the prophets,
And I gave numerous visions,
And through the prophets I gave parables.

Wherever the corpse is, there the vultures will gather.

This is the message we have heard from Him and announce to you, that God is Light, and in Him there is no darkness at all.

that the creation itself also will be set free from its slavery to corruption into the freedom of the glory of the children of God.

promising them freedom while they themselves are slaves of corruption; for by what a man is overcome, by this he is enslaved.