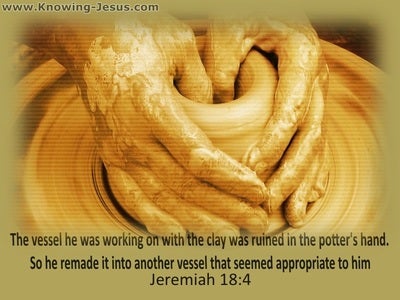 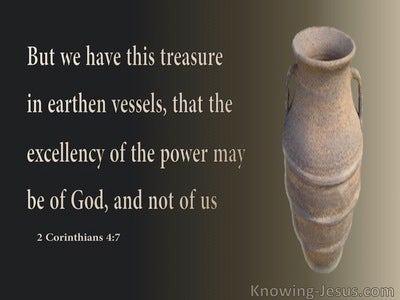 Zechariah 14:21
Verse Concepts
Pots For Cooking And EatingInterlopers In The Temple
cooking

And every cooking pot in Jerusalem and in Judah will be holy to Yahweh of hosts, and all those who sacrifice will come and will take from them, and will cook in them, and there will be no longer a {trader} in the house of Yahweh of hosts on that day.

Ezekiel 11:3
Verse Concepts
Pots For Cooking And EatingWeedcooking
Not The TimeCaldronsUntimeliness

and who eat the flesh of my people, and strip their skin from them, and break their bones, and chop [them] like meat in the pot, and like flesh in the midst of a cooking pot."

Or does the potter not have authority over the clay, to make from the same lump a vessel that [is] for {honorable use} and [one] that [is] for {ordinary use}?

They served the men to eat, but when they ate from the stew, they cried out and said, "There [is] death in the pot, man of God!" They were not able to eat [it].

And the vessel that he [was] making with the clay was spoiled in the hand of the potter, so {he made again} another vessel, as it was right in the eyes of the potter to make.

Moab [is] my washing pot; over Edom, I will cast my sandal. On account of me, O Philistia, raise a shout."

On that day there will be [inscribed] on the bells of the horses, "Holy to Yahweh." And the cooking pots in the house of Yahweh will be [holy] like the sacrificial basins before the altar.

Therefore thus says the Lord Yahweh: "Woe [to] the city of bloodguilt! A pot that [has] its rust in it; {its rust did not go out from it}. Bring it out {piece by piece}; {one is as good as another}.

And anything on which {one of their dead bodies} falls shall become unclean: an oven or a stove must be broken--they [are] unclean and shall be unclean for you.

Elisha asked her, "What shall I do for you? Tell me, what do you have in the house?" Then she said, "Your servant has nothing in the house except a jar of olive oil."

Then he went out to the spring of waters and threw the salt [into it] there and said, "Thus says Yahweh, 'I hereby purify these waters; let there be no longer any death or unproductiveness from it.'"

The jar of flour was not emptied and the jug of olive oil did not run out, according to the word of Yahweh which he spoke by the hand of Elijah.

and he shall slaughter the first bird over fresh water on a clay vessel.

[Is] this man Coniah a despised, shattered vessel? Or a vessel [in which] there is no delight? Why are he and his offspring thrown far, and cast away to the land that they do not know?"

Smoke comes from its nostrils as [from] a kettle boiling and [burning] bulrushes.

And Moses said to Aaron, "Take one jar and put there a full omer of manna. Leave it before Yahweh for safekeeping for your generations."

Then he said to her, "Go, ask for yourself [some] containers from the streets, from all your neighbors. {You must collect as many empty containers as you can}!

One went out to the field to gather herbs, and he found a {wild vine} and gathered wild gourds from it [and] filled his cloak. Then he came and cut them into the pot of stew, but they did not know [what they were].

"I removed his shoulder from a burden. His hands were freed from [the] basket.

{who sit} in graves and spend the night in {secret places}, {who eat} the flesh of swine with a fragment of impurity [in] their vessels,

It will not be as a pot to you, and [so] you would be in the midst of it as flesh, [for] at the border of Israel I will judge you.

And the {Israelites} said to them, "{If only we had died} by the hand of Yahweh in the land of Egypt, when we sat by the pots of meat, when we ate bread {until we were full}, because you have brought us out to this desert to kill all of this assembly with hunger."

Your perversity! As if {a potter} shall be regarded as [the] clay! That [the] product of its maker [says], "He did not make me," and [the] thing made into shape says of its {potter}, "He has no understanding."

and would thrust it into the pan or into the kettle or into the cauldron or into the cooking pot. All that the meat fork brought up the priest would take for himself. This [is] what they used to do to all of the Israelites who came there at Shiloh.

and the pots, the shovels, and the bowls for drinking wine. All the vessels of the tent which Hiram had made for King Solomon [for] the house of Yahweh [were] polished bronze.

But we have this treasure in earthenware jars, in order that the extraordinary degree of the power may be from God and not from us.

Then he said, "Bring [some] flour," and he threw it into the pot. He then said, "Serve the people and let them eat." There was nothing harmful in the pot.

So the woman left her water jar and went away into the town and said to the people,

A crucible [is] for the silver, and a furnace for the gold, but a man [is tested by] the mouth of him who praises him.

Gather its pieces to it, every good piece, thigh and shoulder, fill it [with] choice bones;

Like the sound of thorns under a pot, so also the laughter of fools. This also [is] vanity!

For thus says Yahweh, the God of Israel: 'The jar of flour will not be emptied and the jug of olive oil will not run out until the day Yahweh gives rain on the surface of the earth.'"

Pots For Cooking And Eating

"Blessed will be your basket and your kneading trough.