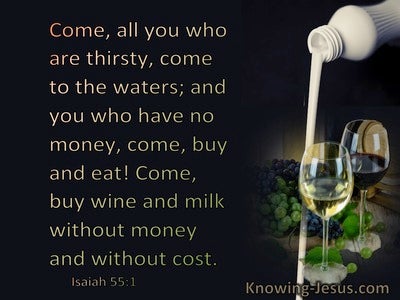 Then he showed me a river of the water of life, clear as crystal, coming from the throne of God and of the Lamb,

‘For I will pour out water on the thirsty land
And streams on the dry ground;
I will pour out My Spirit on your offspring
And My blessing on your descendants;

He who believes in Me, as the Scripture said, ‘From his innermost being will flow rivers of living water.’”

“I will open rivers on the bare heights
And springs in the midst of the valleys;
I will make the wilderness a pool of water
And the dry land fountains of water.

Then he brought me back to the door of the house; and behold, water was flowing from under the threshold of the house toward the east, for the house faced east. And the water was flowing down from under, from the right side of the house, from south of the altar. He brought me out by way of the north gate and led me around on the outside to the outer gate by way of the gate that faces east. And behold, water was trickling from the south side. When the man went out toward the east with a line in his hand, he measured a thousand cubits, and he led me through the water, water reaching the ankles.read more.
Again he measured a thousand and led me through the water, water reaching the knees. Again he measured a thousand and led me through the water, water reaching the loins. Again he measured a thousand; and it was a river that I could not ford, for the water had risen, enough water to swim in, a river that could not be forded. He said to me, “Son of man, have you seen this?” Then he brought me back to the bank of the river. Now when I had returned, behold, on the bank of the river there were very many trees on the one side and on the other. Then he said to me, “These waters go out toward the eastern region and go down into the Arabah; then they go toward the sea, being made to flow into the sea, and the waters of the sea become fresh. It will come about that every living creature which swarms in every place where the river goes, will live. And there will be very many fish, for these waters go there and the others become fresh; so everything will live where the river goes. And it will come about that fishermen will stand beside it; from Engedi to Eneglaim there will be a place for the spreading of nets. Their fish will be according to their kinds, like the fish of the Great Sea, very many. But its swamps and marshes will not become fresh; they will be left for salt. By the river on its bank, on one side and on the other, will grow all kinds of trees for food. Their leaves will not wither and their fruit will not fail. They will bear every month because their water flows from the sanctuary, and their fruit will be for food and their leaves for healing.”

And in that day living waters will flow out of Jerusalem, half of them toward the eastern sea and the other half toward the western sea; it will be in summer as well as in winter.