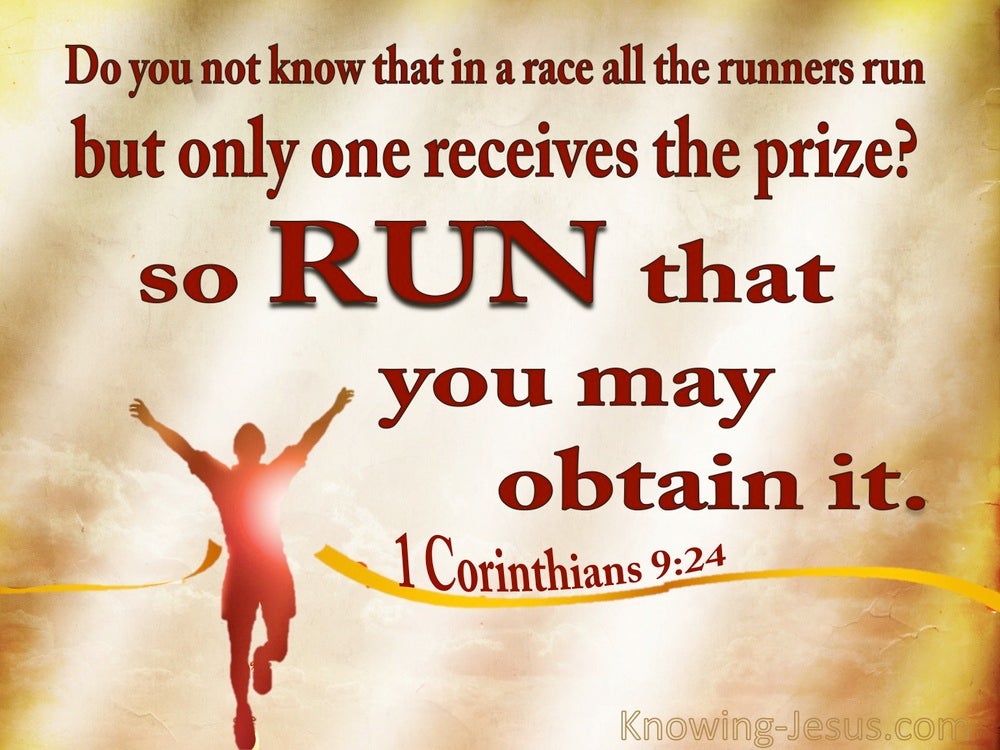 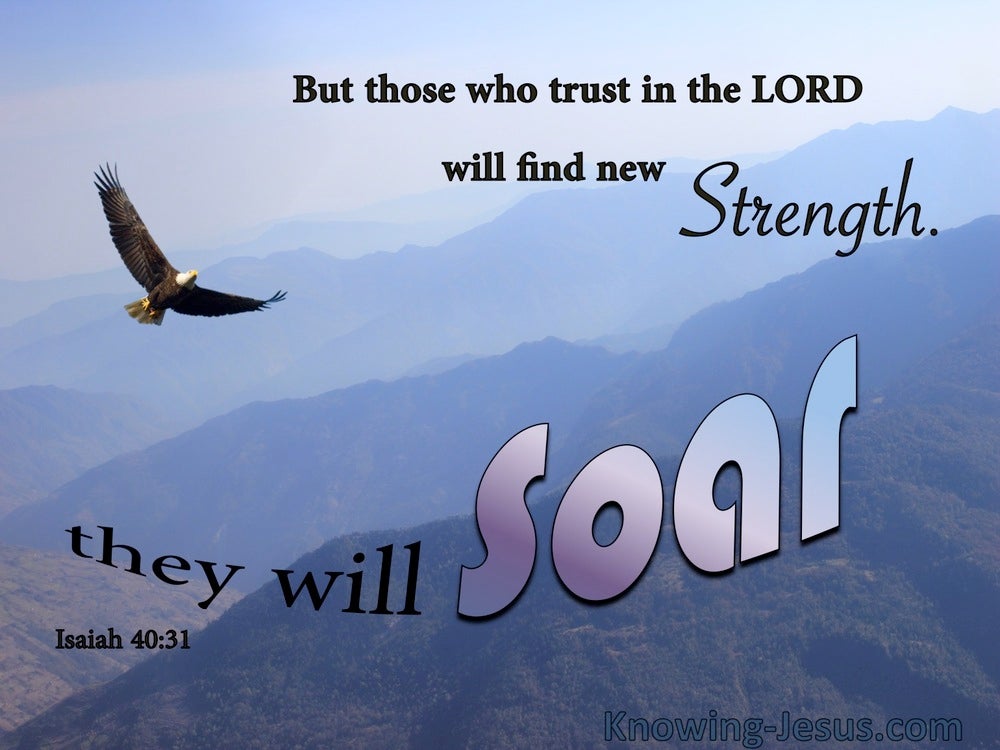 Do you not know that those who run in a race all run, but only one receives the prize? Run in such a way that you may win. Everyone who competes in the games exercises self-control in all things. They then do it to receive a perishable wreath, but we an imperishable. Therefore I run in such a way, as not without aim; I box in such a way, as not beating the air;read more.
but I discipline my body and make it my slave, so that, after I have preached to others, I myself will not be disqualified.

When Athaliah heard the noise of the people running and praising the king, she came into the house of the Lord to the people.

When Jesus saw that a crowd was rapidly gathering, He rebuked the unclean spirit, saying to it, “You deaf and mute spirit, I command you, come out of him and do not enter him again.”

And He said to the disciples, “The days will come when you will long to see one of the days of the Son of Man, and you will not see it. They will say to you, ‘Look there! Look here!’ Do not go away, and do not run after them.

“The ostriches’ wings flap joyously
With the pinion and plumage of love,
For she abandons her eggs to the earth
And warms them in the dust,
And she forgets that a foot may crush them,
Or that a wild beast may trample them.
read more.
“She treats her young cruelly, as if they were not hers;
Though her labor be in vain, she is unconcerned;
Because God has made her forget wisdom,
And has not given her a share of understanding.
“When she lifts herself on high,
She laughs at the horse and his rider.

“If you have run with footmen and they have tired you out,
Then how can you compete with horses?
If you fall down in a land of peace,
How will you do in the thicket of the Jordan?

Now Adonijah the son of Haggith exalted himself, saying, “I will be king.” So he prepared for himself chariots and horsemen with fifty men to run before him.

Then Ahimaaz the son of Zadok said, “Please let me run and bring the king news that the Lord has freed him from the hand of his enemies.”

Then Joab said to the Cushite, “Go, tell the king what you have seen.” So the Cushite bowed to Joab and ran. Now Ahimaaz the son of Zadok said once more to Joab, “But whatever happens, please let me also run after the Cushite.” And Joab said, “Why would you run, my son, since you will have no reward for going?” “But whatever happens,” he said, “I will run.” So he said to him, “Run.” Then Ahimaaz ran by way of the plain and passed up the Cushite.read more.
Now David was sitting between the two gates; and the watchman went up to the roof of the gate by the wall, and raised his eyes and looked, and behold, a man running by himself. The watchman called and told the king. And the king said, “If he is by himself there is good news in his mouth.” And he came nearer and nearer. Then the watchman saw another man running; and the watchman called to the gatekeeper and said, “Behold, another man running by himself.” And the king said, “This one also is bringing good news.” The watchman said, “I think the running of the first one is like the running of Ahimaaz the son of Zadok.” And the king said, “This is a good man and comes with good news.” Ahimaaz called and said to the king, “All is well.” And he prostrated himself before the king with his face to the ground. And he said, “Blessed is the Lord your God, who has delivered up the men who lifted their hands against my lord the king.” The king said, “Is it well with the young man Absalom?” And Ahimaaz answered, “When Joab sent the king’s servant, and your servant, I saw a great tumult, but I did not know what it was.” Then the king said, “Turn aside and stand here.” So he turned aside and stood still. Behold, the Cushite arrived, and the Cushite said, “Let my lord the king receive good news, for the Lord has freed you this day from the hand of all those who rose up against you.” Then the king said to the Cushite, “Is it well with the young man Absalom?” And the Cushite answered, “Let the enemies of my lord the king, and all who rise up against you for evil, be as that young man!”

So she went and came to the man of God to Mount Carmel.When the man of God saw her at a distance, he said to Gehazi his servant, “Behold, there is the Shunammite. Please run now to meet her and say to her, ‘Is it well with you? Is it well with your husband? Is it well with the child?’” And she answered, “It is well.” When she came to the man of God to the hill, she caught hold of his feet. And Gehazi came near to push her away; but the man of God said, “Let her alone, for her soul is troubled within her; and the Lord has hidden it from me and has not told me.”read more.
Then she said, “Did I ask for a son from my lord? Did I not say, ‘Do not deceive me’?” Then he said to Gehazi, “Gird up your loins and take my staff in your hand, and go your way; if you meet any man, do not salute him, and if anyone salutes you, do not answer him; and lay my staff on the lad’s face.” The mother of the lad said, “As the Lord lives and as you yourself live, I will not leave you.” And he arose and followed her. Then Gehazi passed on before them and laid the staff on the lad’s face, but there was no sound or response. So he returned to meet him and told him, “The lad has not awakened.”

But Gehazi, the servant of Elisha the man of God, thought, “Behold, my master has spared this Naaman the Aramean, by not receiving from his hands what he brought. As the Lord lives, I will run after him and take something from him.” So Gehazi pursued Naaman. When Naaman saw one running after him, he came down from the chariot to meet him and said, “Is all well?” He said, “All is well. My master has sent me, saying, ‘Behold, just now two young men of the sons of the prophets have come to me from the hill country of Ephraim. Please give them a talent of silver and two changes of clothes.’”read more.
Naaman said, “Be pleased to take two talents.” And he urged him, and bound two talents of silver in two bags with two changes of clothes and gave them to two of his servants; and they carried them before him.

He sends forth His command to the earth;
His word runs very swiftly.

“I did not send these prophets,
But they ran.
I did not speak to them,
But they prophesied.

Then the Lord answered me and said,
“Record the vision
And inscribe it on tablets,
That the one who reads it may run.

And behold, the angel who was speaking with me was going out, and another angel was coming out to meet him, and said to him, “Run, speak to that young man, saying, ‘Jerusalem will be inhabited without walls because of the multitude of men and cattle within it. For I,’ declares the Lord, ‘will be a wall of fire around her, and I will be the glory in her midst.’”

It was because of a revelation that I went up; and I submitted to them the gospel which I preach among the Gentiles, but I did so in private to those who were of reputation, for fear that I might be running, or had run, in vain.

I shall run the way of Your commandments,
For You will enlarge my heart.

Hear, my son, and accept my sayings
And the years of your life will be many.
I have directed you in the way of wisdom;
I have led you in upright paths.
When you walk, your steps will not be impeded;
And if you run, you will not stumble.

Though youths grow weary and tired,
And vigorous young men stumble badly,
Yet those who wait for the Lord
Will gain new strength;
They will mount up with wings like eagles,
They will run and not get tired,
They will walk and not become weary.

But I do not consider my life of any account as dear to myself, so that I may finish my course and the ministry which I received from the Lord Jesus, to testify solemnly of the gospel of the grace of God.

You were running well; who hindered you from obeying the truth?

Do all things without grumbling or disputing; so that you will prove yourselves to be blameless and innocent, children of God above reproach in the midst of a crooked and perverse generation, among whom you appear as lights in the world, holding fast the word of life, so that in the day of Christ I will have reason to glory because I did not run in vain nor toil in vain.

For I am already being poured out as a drink offering, and the time of my departure has come. I have fought the good fight, I have finished the course, I have kept the faith; in the future there is laid up for me the crown of righteousness, which the Lord, the righteous Judge, will award to me on that day; and not only to me, but also to all who have loved His appearing.

Therefore, since we have so great a cloud of witnesses surrounding us, let us also lay aside every encumbrance and the sin which so easily entangles us, and let us run with endurance the race that is set before us,

The men in ambush rose quickly from their place, and when he had stretched out his hand, they ran and entered the city and captured it, and they quickly set the city on fire.

When he lifted up his eyes and looked, behold, three