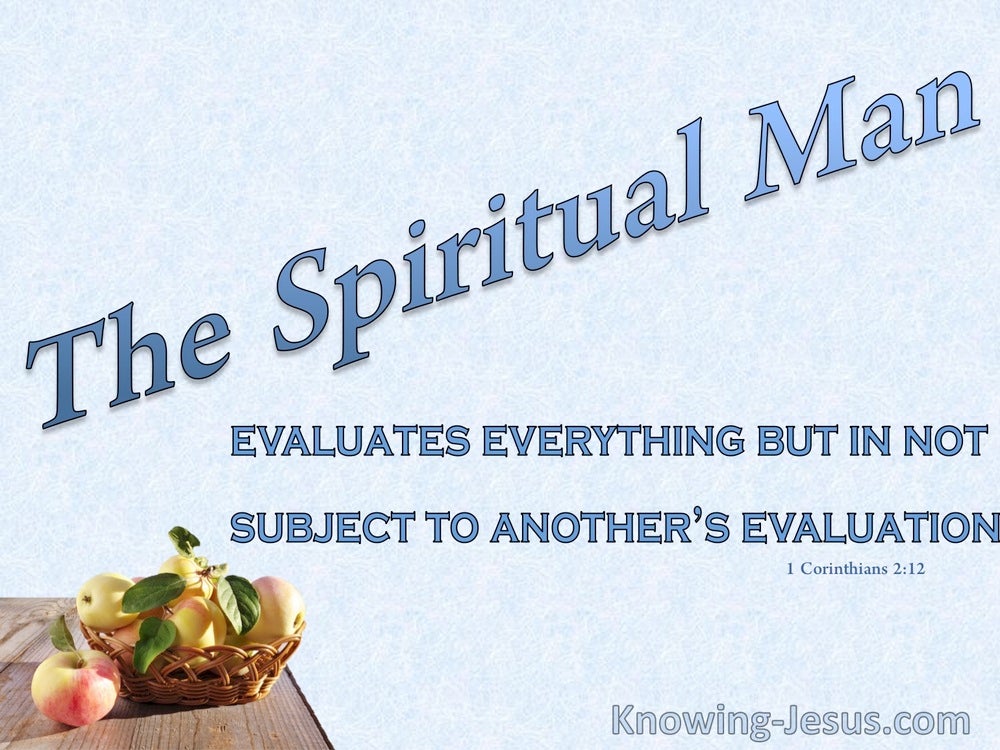 So Elihu the son of Barachel the Buzite spoke out and said,
“I am young in years and you are old;
Therefore I was shy and afraid to tell you what I think.
“I thought age should speak,
And increased years should teach wisdom.
“But it is a spirit in man,
And the breath of the Almighty gives them understanding.
read more.
“The abundant in years may not be wise,
Nor may elders understand justice.

But some men from what was called the Synagogue of the Freedmen, including both Cyrenians and Alexandrians, and some from Cilicia and Asia, rose up and argued with Stephen. But they were unable to cope with the wisdom and the Spirit with which he was speaking.

Now we have received, not the spirit of the world, but the Spirit who is from God, so that we may know the things freely given to us by God, which things we also speak, not in words taught by human wisdom, but in those taught by the Spirit, combining spiritual thoughts with spiritual words. But a natural man does not accept the things of the Spirit of God, for they are foolishness to him; and he cannot understand them, because they are spiritually appraised.

When they came to the hill there, behold, a group of prophets met him; and the Spirit of God came upon him mightily, so that he prophesied among them.

Now God gave Solomon wisdom and very great discernment and breadth of mind, like the sand that is on the seashore. Solomon’s wisdom surpassed the wisdom of all the sons of the east and all the wisdom of Egypt. For he was wiser than all men, than Ethan the Ezrahite, Heman, Calcol and Darda, the sons of Mahol; and his fame was known in all the surrounding nations.read more.
He also spoke 3,000 proverbs, and his songs were 1,005. He spoke of trees, from the cedar that is in Lebanon even to the hyssop that grows on the wall; he spoke also of animals and birds and creeping things and fish. Men came from all peoples to hear the wisdom of Solomon, from all the kings of the earth who had heard of his wisdom.

Now when the queen of Sheba heard about the fame of Solomon concerning the name of the Lord, she came to test him with difficult questions. So she came to Jerusalem with a very large retinue, with camels carrying spices and very much gold and precious stones. When she came to Solomon, she spoke with him about all that was in her heart. Solomon answered all her questions; nothing was hidden from the king which he did not explain to her.read more.
When the queen of Sheba perceived all the wisdom of Solomon, the house that he had built, the food of his table, the seating of his servants, the attendance of his waiters and their attire, his cupbearers, and his stairway by which he went up to the house of the Lord, there was no more spirit in her. Then she said to the king, “It was a true report which I heard in my own land about your words and your wisdom. Nevertheless I did not believe the reports, until I came and my eyes had seen it. And behold, the half was not told me. You exceed in wisdom and prosperity the report which I heard. How blessed are your men, how blessed are these your servants who stand before you continually and hear your wisdom. Blessed be the Lord your God who delighted in you to set you on the throne of Israel; because the Lord loved Israel forever, therefore He made you king, to do justice and righteousness.” She gave the king a hundred and twenty talents of gold, and a very great amount of spices and precious stones. Never again did such abundance of spices come in as that which the queen of Sheba gave King Solomon. Also the ships of Hiram, which brought gold from Ophir, brought in from Ophir a very great number of almug trees and precious stones. The king made of the almug trees supports for the house of the Lord and for the king’s house, also lyres and harps for the singers; such almug trees have not come in again nor have they been seen to this day. King Solomon gave to the queen of Sheba all her desire which she requested, besides what he gave her according to his royal bounty. Then she turned and went to her own land together with her servants. Now the weight of gold which came in to Solomon in one year was 666 talents of gold, besides that from the traders and the wares of the merchants and all the kings of the Arabs and the governors of the country. King Solomon made 200 large shields of beaten gold, using 600 shekels of gold on each large shield. He made 300 shields of beaten gold, using three minas of gold on each shield, and the king put them in the house of the forest of Lebanon. Moreover, the king made a great throne of ivory and overlaid it with refined gold. There were six steps to the throne and a round top to the throne at its rear, and arms on each side of the seat, and two lions standing beside the arms. Twelve lions were standing there on the six steps on the one side and on the other; nothing like it was made for any other kingdom. All King Solomon’s drinking vessels were of gold, and all the vessels of the house of the forest of Lebanon were of pure gold. None was of silver; it was not considered valuable in the days of Solomon. For the king had at sea the ships of Tarshish with the ships of Hiram; once every three years the ships of Tarshish came bringing gold and silver, ivory and apes and peacocks. So King Solomon became greater than all the kings of the earth in riches and in wisdom.

The queen entered the banquet hall because of the words of the king and his nobles; the queen spoke and said, “O king, live forever! Do not let your thoughts alarm you or your face be pale. There is a man in your kingdom in whom is a spirit of the holy gods; and in the days of your father, illumination, insight and wisdom like the wisdom of the gods were found in him. And King Nebuchadnezzar, your father, your father the king, appointed him chief of the magicians, conjurers, Chaldeans and diviners. This was because an extraordinary spirit, knowledge and insight, interpretation of dreams, explanation of enigmas and solving of difficult problems were found in this Daniel, whom the king named Belteshazzar. Let Daniel now be summoned and he will declare the interpretation.”read more.
Then Daniel was brought in before the king. The king spoke and said to Daniel, “Are you that Daniel who is one of the exiles from Judah, whom my father the king brought from Judah? Now I have heard about you that a spirit of the gods is in you, and that illumination, insight and extraordinary wisdom have been found in you. Just now the wise men and the conjurers were brought in before me that they might read this inscription and make its interpretation known to me, but they could not declare the interpretation of the message. But I personally have heard about you, that you are able to give interpretations and solve difficult problems. Now if you are able to read the inscription and make its interpretation known to me, you will be clothed with purple and wear a necklace of gold around your neck, and you will have authority as the third ruler in the kingdom.”

Therefore, brethren, select from among you seven men of good reputation, full of the Spirit and of wisdom, whom we may put in charge of this task.

Acts 15:28
Verse Concepts
Good ActivityLed By The SpiritExamples Of Life In The SpiritMind, Of Christ
God Is ImmanentGuidance Of The Holy SpiritCompromise, As A SolutionThe Holy Spirit In The Church

For to one is given the word of wisdom through the Spirit, and to another the word of knowledge according to the same Spirit;

For this reason also, since the day we heard of it, we have not ceased to pray for you and to ask that you may be filled with the knowledge of His will in all spiritual wisdom and understanding,