10 Bible Verses about The Lord As A Thief 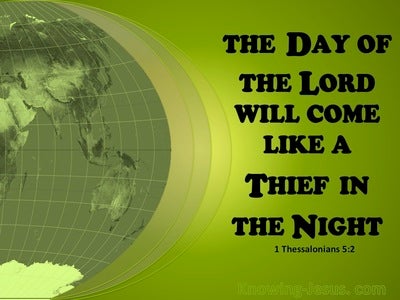 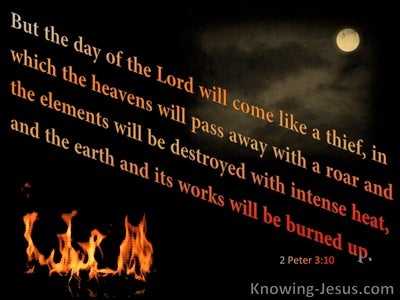 For you yourselves know perfectly well that the day of the [return of the] Lord will come [as unexpectedly and suddenly] as a thief in the night.

But you are not in [given up to the power of] darkness, brethren, for that day to overtake you by surprise like a thief.

But the day of the Lord will come like a thief, and then the heavens will vanish (pass away) with a thunderous crash, and the [ material] elements [of the universe] will be dissolved with fire, and the earth and the works that are upon it will be burned up.

So call to mind the lessons you received and heard; continually lay them to heart and obey them, and repent. In case you will not rouse yourselves and keep awake and watch, I will come upon you like a thief, and you will not know or suspect at what hour I will come.

Behold, I am going to come like a thief! Blessed (happy, to be envied) is he who stays awake (alert) and who guards his clothes, so that he may not be naked and [have the shame of being] seen exposed!

But understand this: had the householder known in what [part of the night, whether in a night or a morning] watch the thief was coming, he would have watched and would not have allowed his house to be undermined and broken into.

But of this be assured: if the householder had known at what time the burglar was coming, he would have been awake and alert and watching and would not have permitted his house to be dug through and broken into.

At that moment Jesus said to the crowds, Have you come out with swords and clubs as [you would] against a robber to capture Me? Day after day I was accustomed to sit in the porches and courts of the temple teaching, and you did not arrest Me.

And Jesus said to them, Have you come out with swords and clubs as [you would] against a robber to capture Me?

Then Jesus said to those who had come out against Him -- "the chief priests and captains of the temple and elders [of the Sanhedrin] -- "Have you come out with swords and clubs as [you would] against a robber?