20 Bible Verses about Abominations, Idolatry Is 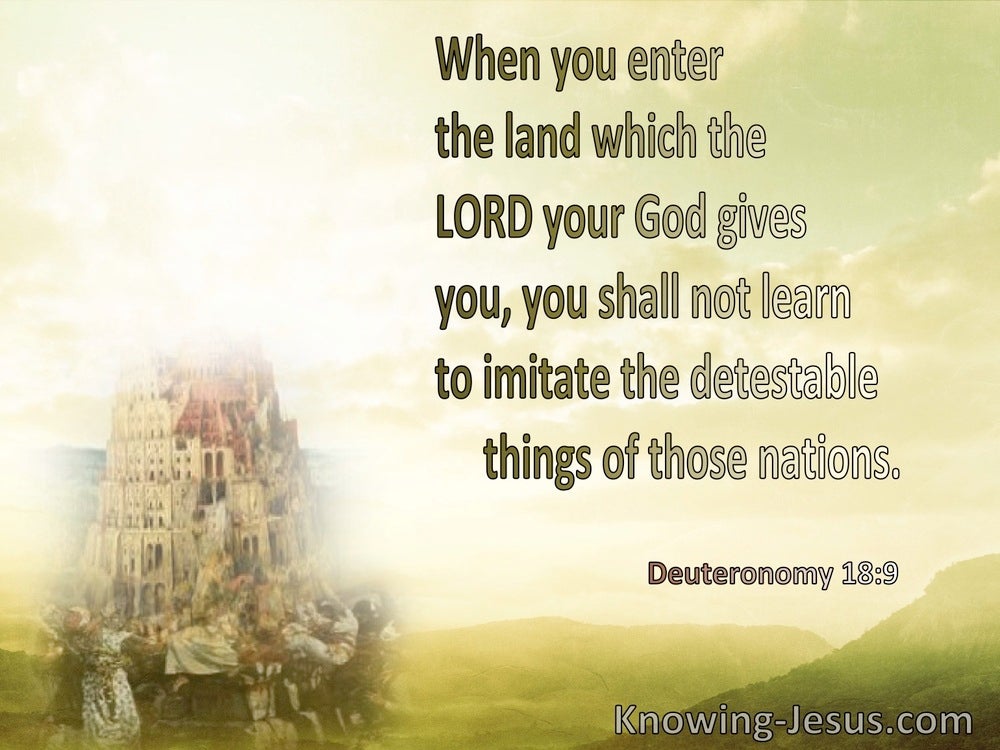 because of all the evil of the sons of Israel and the sons of Judah which they have done to provoke Me to anger—they, their kings, their leaders, their priests, their prophets, the men of Judah and the inhabitants of Jerusalem. They have turned their back to Me and not their face; though I taught them, teaching again and again, they would not listen and receive instruction. But they put their detestable things in the house which is called by My name, to defile it.read more.
They built the high places of Baal that are in the valley of Ben-hinnom to cause their sons and their daughters to pass through the fire to Molech, which I had not commanded them nor had it entered My mind that they should do this abomination, to cause Judah to sin.

The graven images of their gods you are to burn with fire; you shall not covet the silver or the gold that is on them, nor take it for yourselves, or you will be snared by it, for it is an abomination to the Lord your God. You shall not bring an abomination into your house, and like it come under the ban; you shall utterly detest it and you shall utterly abhor it, for it is something banned.

You shall not behave thus toward the Lord your God, for every abominable act which the Lord hates they have done for their gods; for they even burn their sons and daughters in the fire to their gods.

“But Jeshurun grew fat and kicked—
You are grown fat, thick, and sleek—
Then he forsook God who made him,
And scorned the Rock of his salvation.
“They made Him jealous with strange gods;
With abominations they provoked Him to anger.

For when Solomon was old, his wives turned his heart away after other gods; and his heart was not wholly devoted to the Lord his God, as the heart of David his father had been. For Solomon went after Ashtoreth the goddess of the Sidonians and after Milcom the detestable idol of the Ammonites. Solomon did what was evil in the sight of the Lord, and did not follow the Lord fully, as David his father had done.read more.
Then Solomon built a high place for Chemosh the detestable idol of Moab, on the mountain which is east of Jerusalem, and for Molech the detestable idol of the sons of Ammon. Thus also he did for all his foreign wives, who burned incense and sacrificed to their gods.

Isaiah 44:19
Verse Concepts
Those Who Were IgnorantAbominationsFirewoodIgnorance Towards God, Leads To
Half Of ThingsDullnessBowing To False GodsBaking Bread

No one recalls, nor is there knowledge or understanding to say, “I have burned half of it in the fire and also have baked bread over its coals. I roast meat and eat it. Then I make the rest of it into an abomination, I fall down before a block of wood!”

“If you will return, O Israel,” declares the Lord,
“Then you should return to Me.
And if you will put away your detested things from My presence,
And will not waver,
And you will swear, ‘As the Lord lives,’
In truth, in justice and in righteousness;
Then the nations will bless themselves in Him,
And in Him they will glory.”

For the sons of Judah have done that which is evil in My sight,” declares the Lord, “they have set their detestable things in the house which is called by My name, to defile it.

I will first doubly repay their iniquity and their sin, because they have polluted My land; they have filled My inheritance with the carcasses of their detestable idols and with their abominations.”

And because of all your abominations, I will do among you what I have not done, and the like of which I will never do again.

They transformed the beauty of His ornaments into pride, and they made the images of their abominations and their detestable things with it; therefore I will make it an abhorrent thing to them.

Therefore say, ‘Thus says the Lord God, “I will gather you from the peoples and assemble you out of the countries among which you have been scattered, and I will give you the land of Israel.”’ When they come there, they will remove all its detestable things and all its abominations from it. And I will give them one heart, and put a new spirit within them. And I will take the heart of stone out of their flesh and give them a heart of flesh,read more.
that they may walk in My statutes and keep My ordinances and do them. Then they will be My people, and I shall be their God. But as for those whose hearts go after their detestable things and abominations, I will bring their conduct down on their heads,” declares the Lord God.

Therefore, say to the house of Israel, ‘Thus says the Lord God, “Will you defile yourselves after the manner of your fathers and play the harlot after their detestable things?

I found Israel like grapes in the wilderness;
I saw your forefathers as the earliest fruit on the fig tree in its first season.
But they came to Baal-peor and devoted themselves to shame,
And they became as detestable as that which they loved.

For the time already past is sufficient for you to have carried out the desire of the Gentiles, having pursued a course of sensuality, lusts, drunkenness, carousing, drinking parties and abominable idolatries.