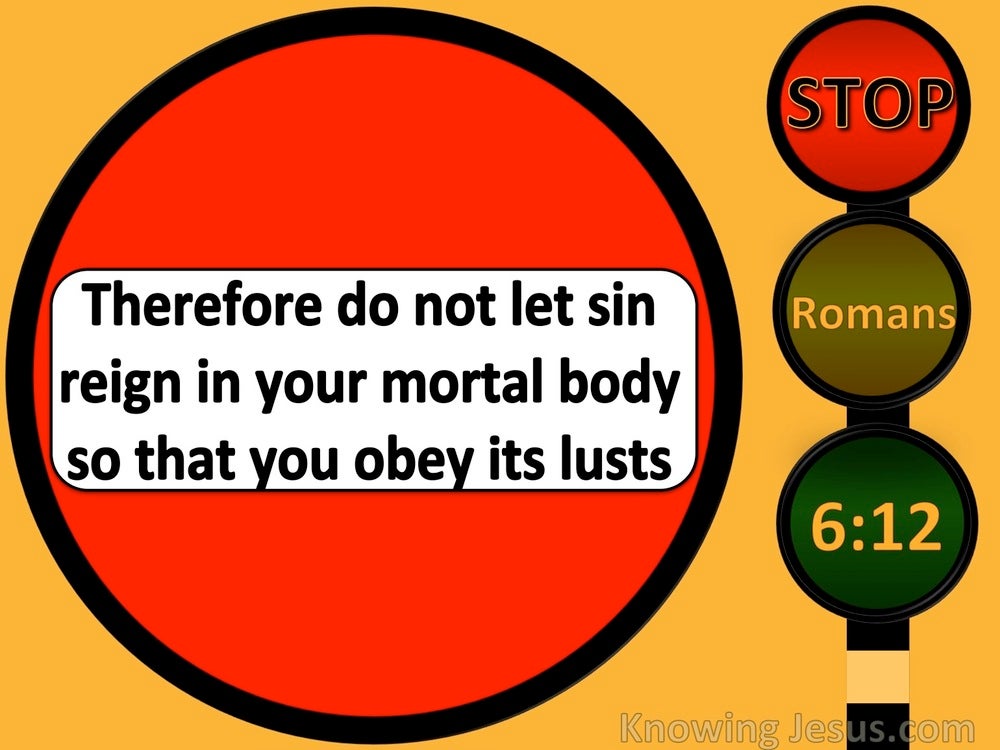 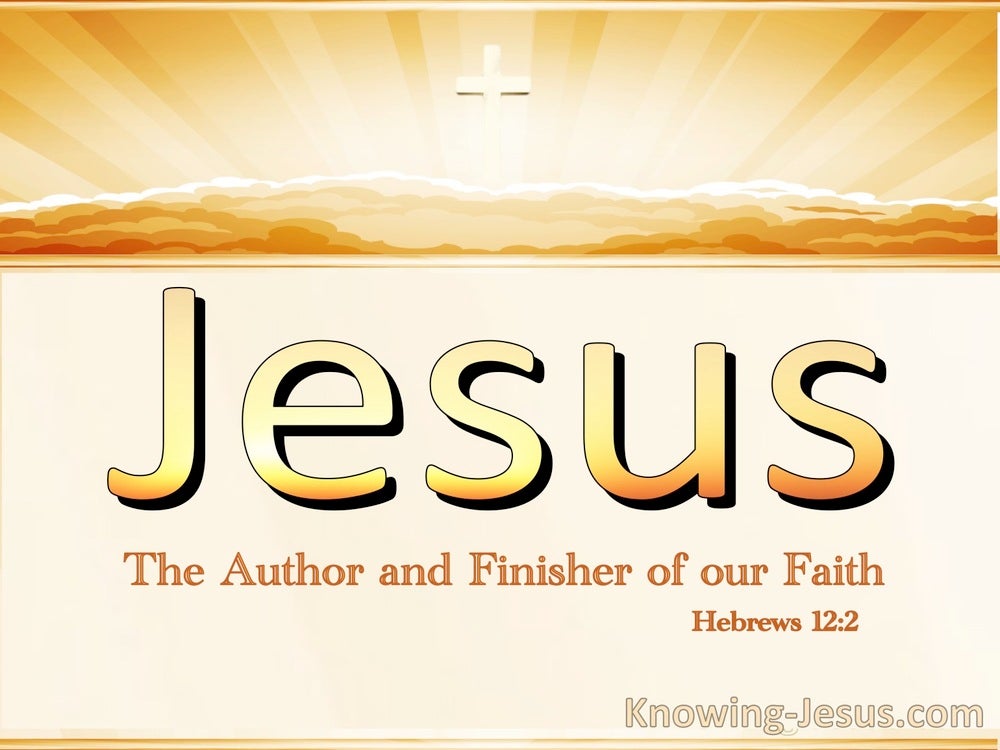 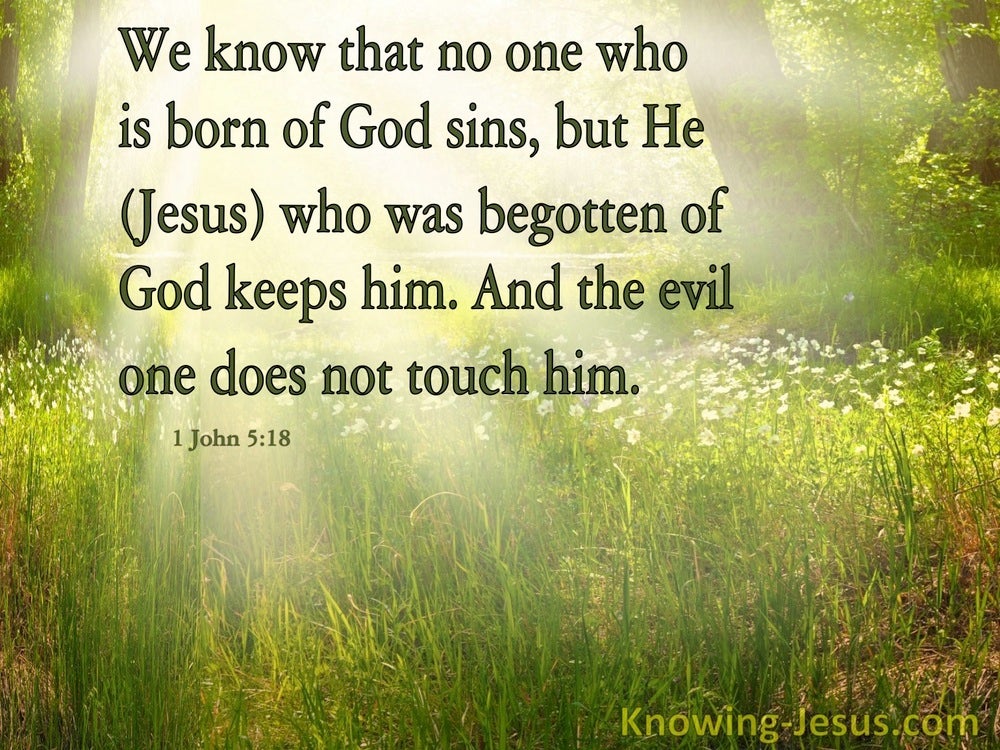 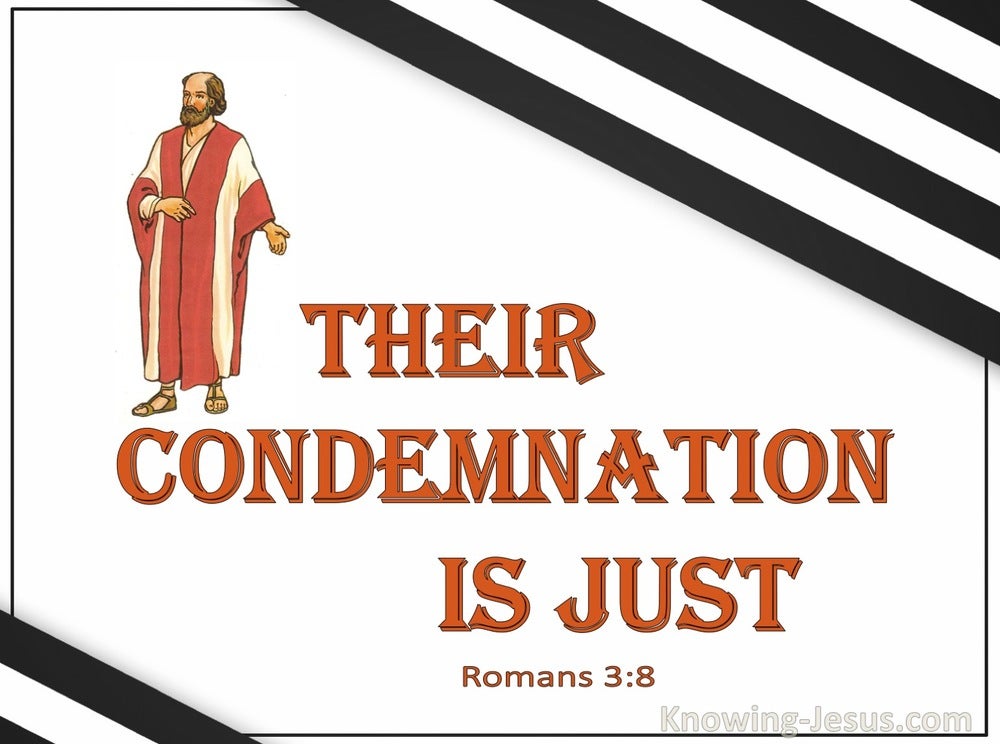 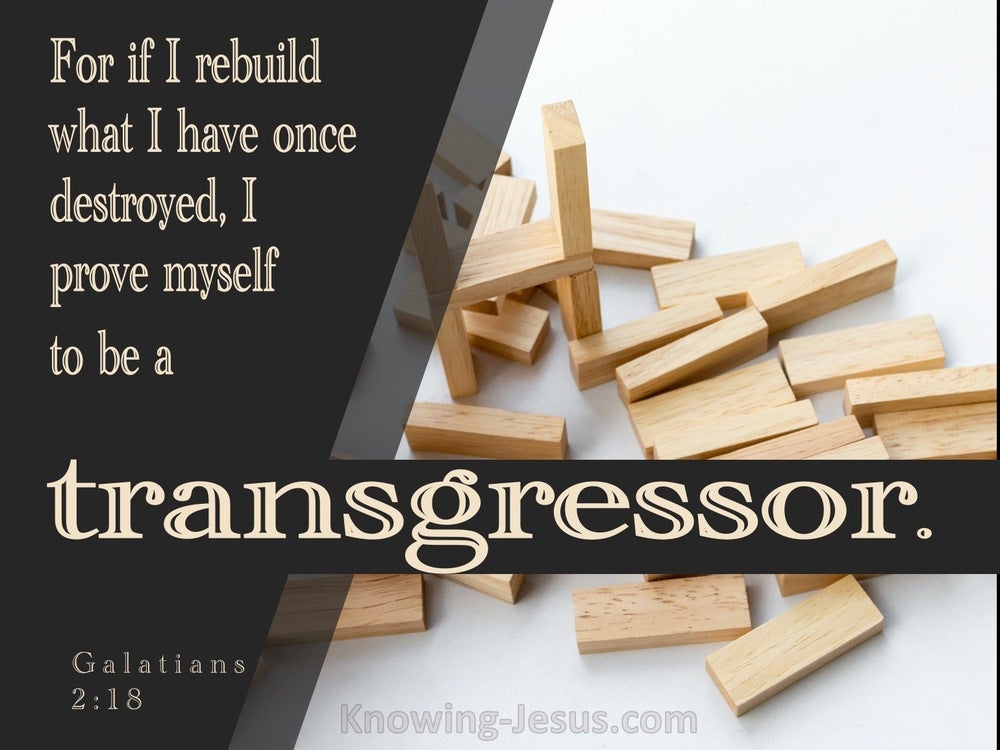 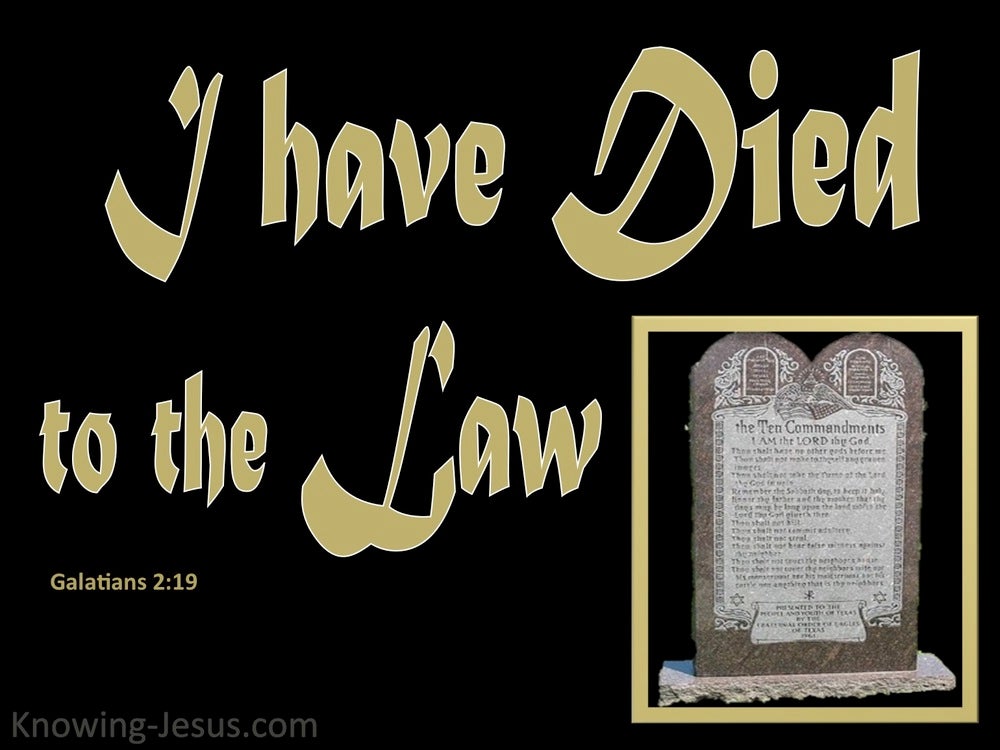 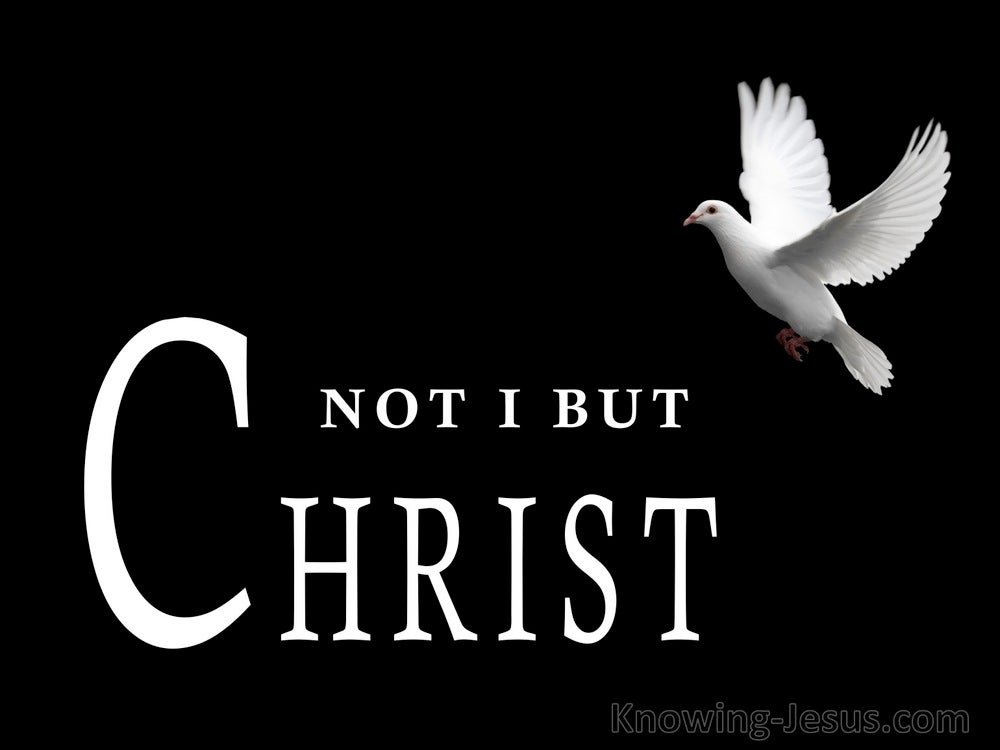 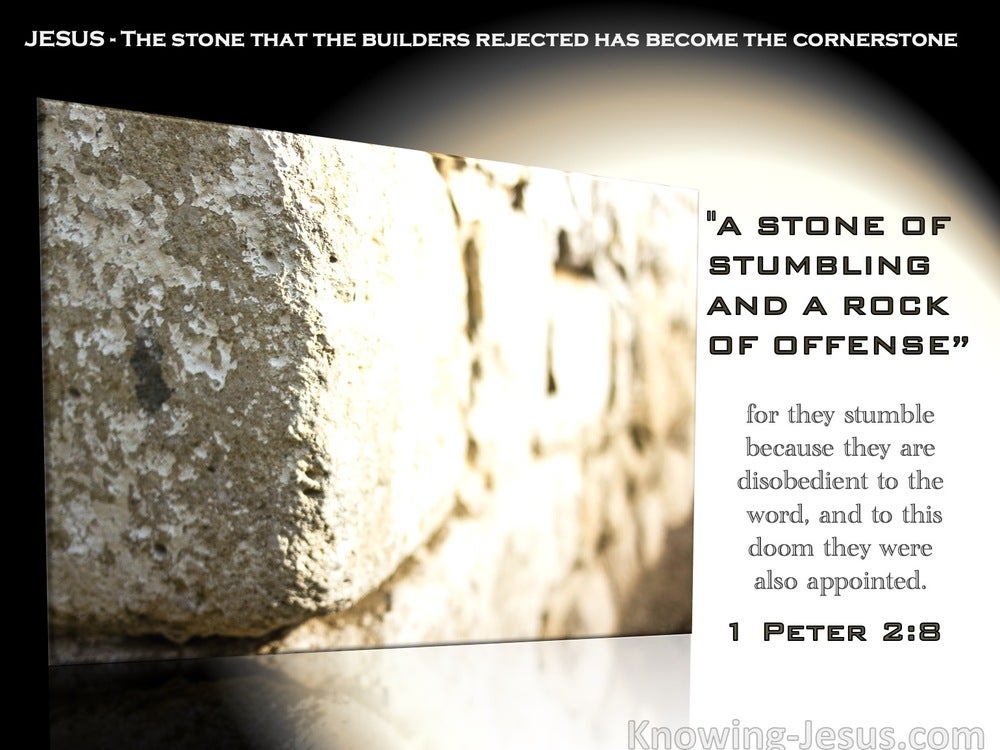 For sin shall not be master over you, for you are not under law but under grace.

Therefore, since we have so great a cloud of witnesses surrounding us, let us also lay aside every encumbrance and the sin which so easily entangles us, and let us run with endurance the race that is set before us, fixing our eyes on Jesus, the author and perfecter of faith, who for the joy set before Him endured the cross, despising the shame, and has sat down at the right hand of the throne of God.

What shall we say then? Are we to continue in sin so that grace may increase? May it never be! How shall we who died to sin still live in it?

What then? Shall we sin because we are not under law but under grace? May it never be!

But if our unrighteousness demonstrates the righteousness of God, what shall we say? The God who inflicts wrath is not unrighteous, is He? (I am speaking in human terms.) May it never be! For otherwise, how will God judge the world? But if through my lie the truth of God abounded to His glory, why am I also still being judged as a sinner?read more.
And why not say (as we are slanderously reported and as some claim that we say), “Let us do evil that good may come”? Their condemnation is just.

But if, while seeking to be justified in Christ, we ourselves have also been found sinners, is Christ then a minister of sin? May it never be! For if I rebuild what I have once destroyed, I prove myself to be a transgressor. For through the Law I died to the Law, so that I might live to God.read more.
I have been crucified with Christ; and it is no longer I who live, but Christ lives in me; and the life which I now live in the flesh I live by faith in the Son of God, who loved me and gave Himself up for me. I do not nullify the grace of God, for if righteousness comes through the Law, then Christ died needlessly.”

But take care that this liberty of yours does not somehow become a stumbling block to the weak. For if someone sees you, who have knowledge, dining in an idol’s temple, will not his conscience, if he is weak, be strengthened to eat things sacrificed to idols? For through your knowledge he who is weak is ruined, the brother for whose sake Christ died.read more.
And so, by sinning against the brethren and wounding their conscience when it is weak, you sin against Christ.

Act as free men, and do not use your freedom as a covering for evil, but use it as bondslaves of God.

All things are lawful for me, but not all things are profitable. All things are lawful for me, but I will not be mastered by anything. Food is for the stomach and the stomach is for food, but God will do away with both of them. Yet the body is not for immorality, but for the Lord, and the Lord is for the body. Now God has not only raised the Lord, but will also raise us up through His power.read more.
Do you not know that your bodies are members of Christ? Shall I then take away the members of Christ and make them members of a prostitute? May it never be! Or do you not know that the one who joins himself to a prostitute is one body with her? For He says, “The two shall become one flesh.” But the one who joins himself to the Lord is one spirit with Him. Flee immorality. Every other sin that a man commits is outside the body, but the immoral man sins against his own body. Or do you not know that your body is a temple of the Holy Spirit who is in you, whom you have from God, and that you are not your own? For you have been bought with a price: therefore glorify God in your body.

But I have this against you, that you tolerate the woman Jezebel, who calls herself a prophetess, and she teaches and leads My bond-servants astray so that they commit acts of immorality and eat things sacrificed to idols. I gave her time to repent, and she does not want to repent of her immorality. Behold, I will throw her on a bed of sickness, and those who commit adultery with her into great tribulation, unless they repent of her deeds.

Therefore when you meet together, it is not to eat the Lord’s Supper, for in your eating each one takes his own supper first; and one is hungry and another is drunk. What! Do you not have houses in which to eat and drink? Or do you despise the church of God and shame those who have nothing? What shall I say to you? Shall I praise you? In this I will not praise you.

Therefore, since we have so great a cloud of witnesses surrounding us, let us also lay aside every encumbrance and the sin which so easily entangles us, and let us run with endurance the race that is set before us,

and,
“A stone of stumbling and a rock of offense”;
for they stumble because they are disobedient to the word, and to this doom they were also appointed.

Pursue love, yet desire earnestly spiritual gifts, but especially that you may prophesy. For one who speaks in a tongue does not speak to men but to God; for no one understands, but in his spirit he speaks mysteries. But one who prophesies speaks to men for edification and exhortation and consolation.read more.
One who speaks in a tongue edifies himself; but one who prophesies edifies the church. Now I wish that you all spoke in tongues, but even more that you would prophesy; and greater is one who prophesies than one who speaks in tongues, unless he interprets, so that the church may receive edifying. But now, brethren, if I come to you speaking in tongues, what will I profit you unless I speak to you either by way of revelation or of knowledge or of prophecy or of teaching? Yet even lifeless things, either flute or harp, in producing a sound, if they do not produce a distinction in the tones, how will it be known what is played on the flute or on the harp? For if the bugle produces an indistinct sound, who will prepare himself for battle? So also you, unless you utter by the tongue speech that is clear, how will it be known what is spoken? For you will be speaking into the air. There are, perhaps, a great many kinds of languages in the world, and no kind is without meaning. If then I do not know the meaning of the language, I will be to the one who speaks a barbarian, and the one who speaks will be a barbarian to me. So also you, since you are zealous of spiritual gifts, seek to abound for the edification of the church. Therefore let one who speaks in a tongue pray that he may interpret. For if I pray in a tongue, my spirit prays, but my mind is unfruitful. What is the outcome then? I will pray with the spirit and I will pray with the mind also; I will sing with the spirit and I will sing with the mind also. Otherwise if you bless in the spirit only, how will the one who fills the place of the ungifted say the “Amen” at your giving of thanks, since he does not know what you are saying? For you are giving thanks well enough, but the other person is not edified. I thank God, I speak in tongues more than you all; however, in the church I desire to speak five words with my mind so that I may instruct others also, rather than ten thousand words in a tongue. Brethren, do not be children in your thinking; yet in evil be infants, but in your thinking be mature.

Now concerning things sacrificed to idols, we know that we all have knowledge. Knowledge makes arrogant, but love edifies. If anyone supposes that he knows anything, he has not yet known as he ought to know; but if anyone loves God, he is known by Him.read more.
Therefore concerning the eating of things sacrificed to idols, we know that there is no such thing as an idol in the world, and that there is no God but one. For even if there are so-called gods whether in heaven or on earth, as indeed there are many gods and many lords, yet for us there is but one God, the Father, from whom are all things and we exist for Him; and one Lord, Jesus Christ, by whom are all things, and we exist through Him. However not all men have this knowledge; but some, being accustomed to the idol until now, eat food as if it were sacrificed to an idol; and their conscience being weak is defiled. But food will not commend us to God; we are neither the worse if we do not eat, nor the better if we do eat. But take care that this liberty of yours does not somehow become a stumbling block to the weak. For if someone sees you, who have knowledge, dining in an idol’s temple, will not his conscience, if he is weak, be strengthened to eat things sacrificed to idols? For through your knowledge he who is weak is ruined, the brother for whose sake Christ died. And so, by sinning against the brethren and wounding their conscience when it is weak, you sin against Christ. Therefore, if food causes my brother to stumble, I will never eat meat again, so that I will not cause my brother to stumble.

But I have a few things against you, because you have there some who hold the teaching of Balaam, who kept teaching Balak to put a stumbling block before the sons of Israel, to eat things sacrificed to idols and to commit acts of immorality.