19 more readings on Out

48 Bible Verses about Casting Out Demons 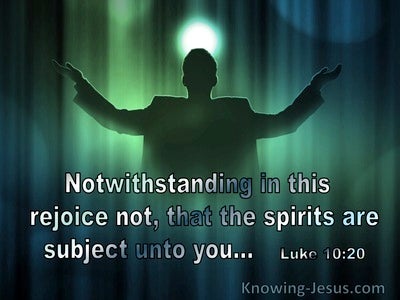 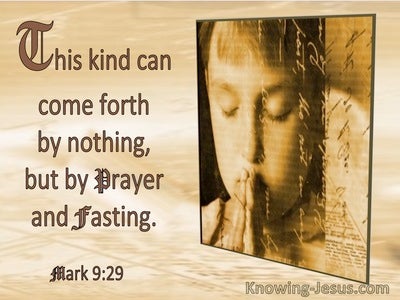 and to have authority to cast out demons.

These signs will accompany those who believe: in my name they will cast out demons; they will speak with new languages;

But if I by the finger of God cast out demons, then the Kingdom of God has come to you.

Then the disciples came to Jesus privately, and said, "Why weren't we able to cast it out?"

But if I by the Spirit of God cast out demons, then the Kingdom of God has come upon you.

The man in whom the evil spirit was leaped on them, and overpowered them all, and prevailed against them, so that they fled out of that house naked and wounded.

But the Pharisees said, "By the prince of the demons, he casts out demons."

Jesus rebuked him, the demon went out of him, and the boy was cured from that hour.

He was casting out a demon, and it was mute. It happened, when the demon had gone out, the mute man spoke; and the crowds marveled.

The evil spirit answered, "Jesus I know, and Paul I know, but who are you?"

But some of them said, "He casts out demons by Beelzebul, the prince of the demons."

If I by Beelzebul cast out demons, by whom do your children cast them out? Therefore they will be your judges.

And if Satan casts out Satan, he is divided against himself. How then will his kingdom stand?

He called the twelve together, and gave them power and authority over all demons, and to cure diseases.

But when the Pharisees heard it, they said, "This man does not cast out demons, except by Beelzebul, the prince of the demons."

And the scribes who came down from Jerusalem said, "He has Beelzebul," and, "By the prince of the demons he casts out the demons."

And he went into their synagogues throughout all Galilee, preaching and casting out demons.

And the demons begged him, saying, "If you cast us out, permit us to go away into the herd of pigs."

John answered, "Master, we saw someone casting out demons in your name, and we forbade him, because he does not follow with us."

John said to him, "Teacher, we saw someone casting out demons in your name; and we forbade him, because he does not follow us."

22 While they were together in Galilee, Jesus said to them, "The Son of Man is about to be delivered up into the hands of men,

But if I cast out demons by Beelzebul, by whom do your children cast them out? Therefore will they be your judges.

They cast out many demons, and anointed many with oil who were sick, and healed them.

But some of the itinerant Jews, exorcists, took on themselves to invoke over those who had the evil spirits the name of the Lord Jesus, saying, "I adjure you by Jesus whom Paul preaches."

and certain women who had been healed of evil spirits and infirmities: Mary who was called Magdalene, from whom seven demons had gone out;

And he called to himself his twelve disciples, and gave them authority over unclean spirits, to cast them out, and to heal every disease and every sickness.

If Satan also is divided against himself, how will his kingdom stand? For you say that I cast out demons by Beelzebul.

Jesus asked him, "What is your name?" He said, "Legion," for many demons had entered into him.

The seventy-two returned with joy, saying, "Lord, even the demons are subject to us in your name."

And when evening came, they brought to him many possessed with demons. He cast out the spirits with a word, and healed all who were sick;

And he said to them, "Go and tell that fox, 'Look, I cast out demons and perform cures today and tomorrow, and the third day I complete my mission.

In the synagogue there was a man who had a spirit of an unclean demon, and he shouted with a loud voice,

Nevertheless, do not rejoice in this, that the spirits are subject to you, but rejoice that your names are written in heaven."

Then he goes, and takes with himself seven other spirits more evil than he is, and they enter in and dwell there. The last state of that man becomes worse than the first. Even so will it be also to this evil generation."

Then he goes, and takes seven other spirits more evil than himself, and they enter in and dwell there. The last state of that man becomes worse than the first."

And they begged him, saying, "Send us into the pigs, that we may enter into them."

For unclean spirits came out of many of those who had them. They came out, crying with a loud voice. Many who had been paralyzed and lame were healed.

Luke 8:33
Verse Concepts
Others Going Downjumpingpork
The DevillakesDeath Of Creatures

The demons came out from the man, and entered into the pigs, and the herd rushed down the steep bank into the lake, and were drowned.

And when the demon was cast out, the mute man spoke. And the crowds marveled, saying, "Nothing like this has ever been seen in Israel."

And he said to them, "This kind can come out by nothing, except by prayer and fasting."

for they are spirits of demons, performing signs; which go forth to the kings of the whole inhabited earth, to gather them together for the war of the great day of God, the Almighty.

The unclean spirit, when he has gone out of the man, passes through dry places, seeking rest, and finding none, he says, 'I will turn back to my house from which I came out.'

Look, I have given you authority to tread on serpents and scorpions, and over all the power of the enemy, and nothing will in any way hurt you.

I begged your disciples to cast it out, and they could not."

Topics on Casting Out Demons

Then Jesus said to him, "Go away, Satan. For it is written, 'You shall worship the Lord your God, and you shall serve him only.'"