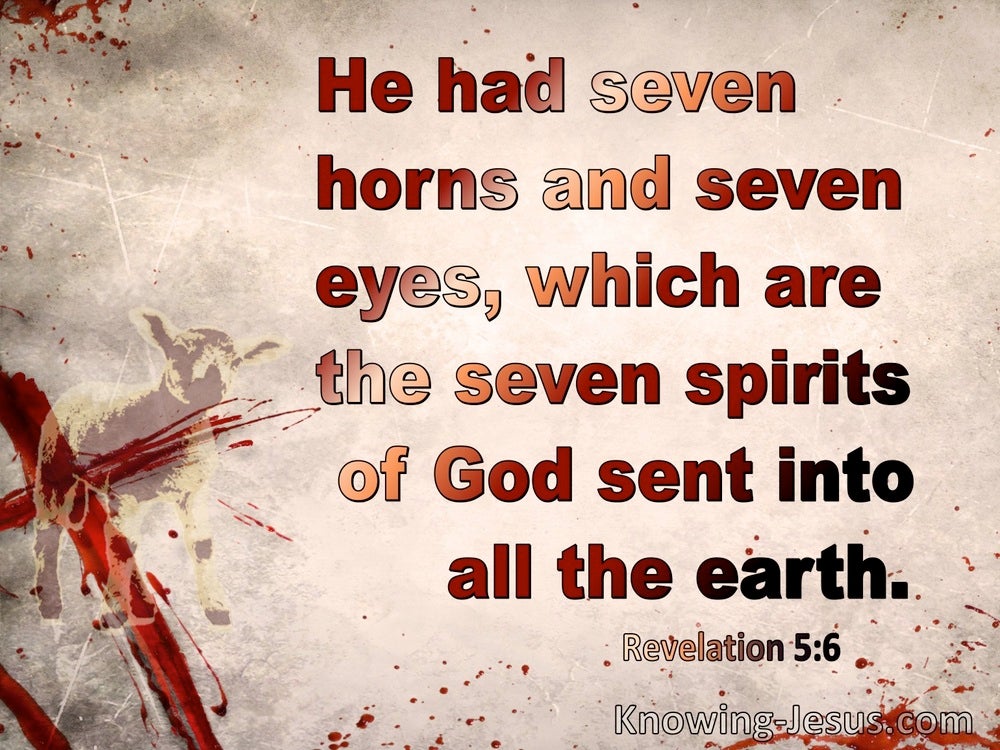 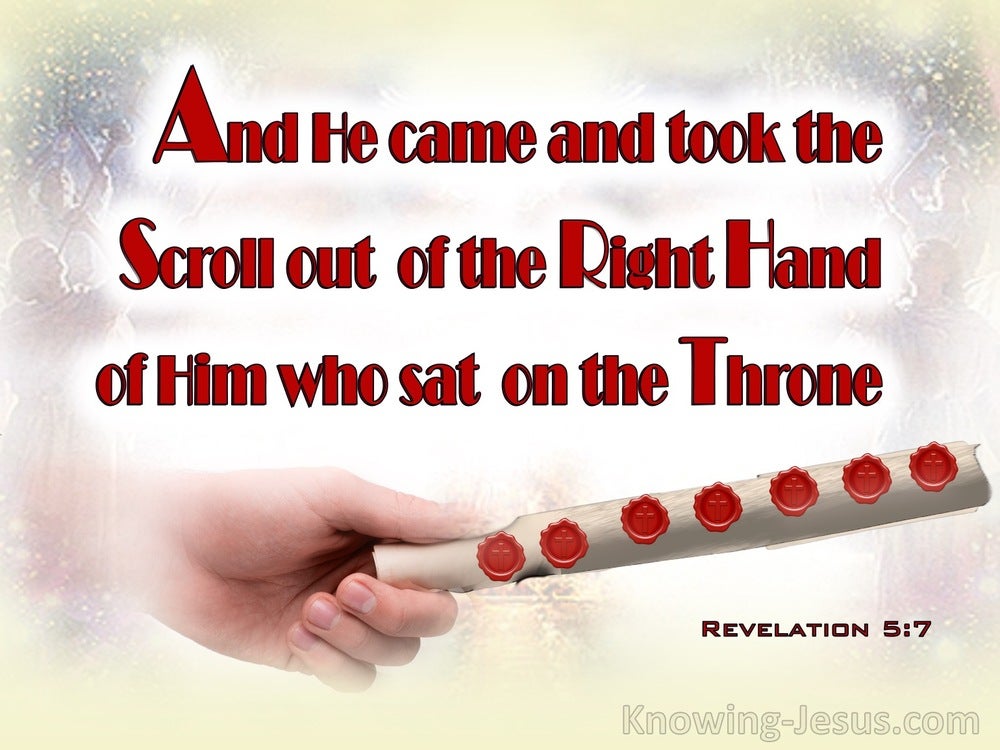 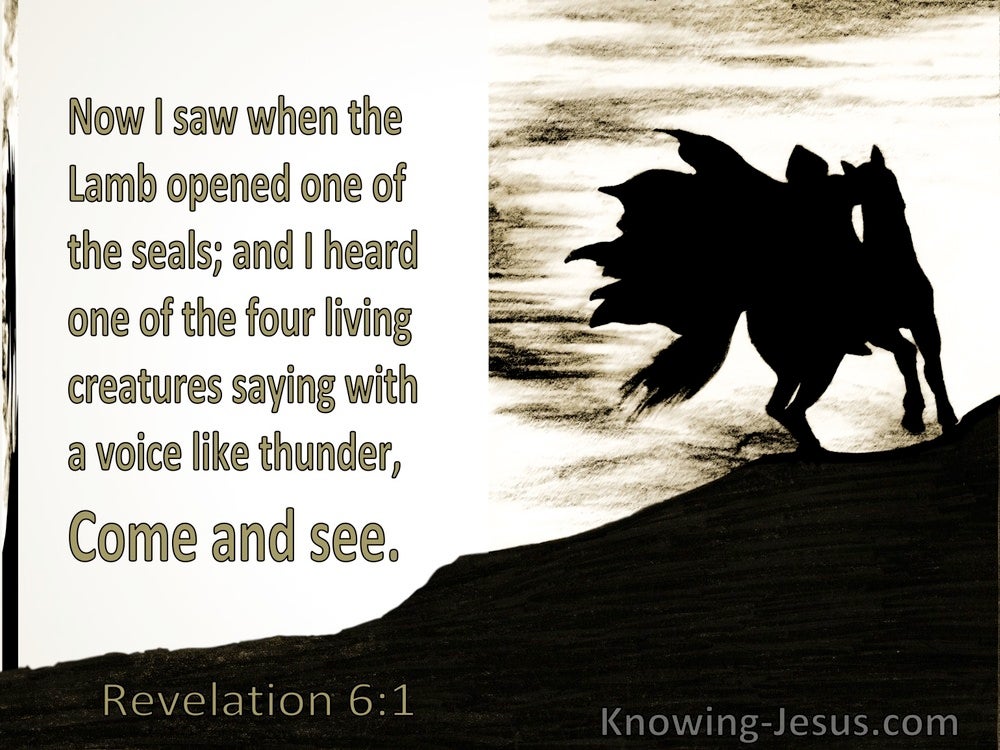 Within it there were figures resembling four living beings. And this was their appearance: they had human form. Each of them had four faces and four wings.

and before the throne there was something like a sea of glass, like crystal; and in the center and around the throne, four living creatures full of eyes in front and behind. The first creature was like a lion, and the second creature like a calf, and the third creature had a face like that of a man, and the fourth creature was like a flying eagle. And the four living creatures, each one of them having six wings, are full of eyes around and within; and day and night they do not cease to say,“Holy, holy, holy is the Lord God, the Almighty, who was and who is and who is to come.”

And when the living creatures give glory and honor and thanks to Him who sits on the throne, to Him who lives forever and ever, the twenty-four elders will fall down before Him who sits on the throne, and will worship Him who lives forever and ever, and will cast their crowns before the throne, saying, “Worthy are You, our Lord and our God, to receive glory and honor and power; for You created all things, and because of Your will they existed, and were created.”

And I saw between the throne (with the four living creatures) and the elders a Lamb standing, as if slain, having seven horns and seven eyes, which are the seven Spirits of God, sent out into all the earth. And He came and took the book out of the right hand of Him who sat on the throne. When He had taken the book, the four living creatures and the twenty-four elders fell down before the Lamb, each one holding a harp and golden bowls full of incense, which are the prayers of the saints.read more.
And they *sang a new song, saying, “Worthy are You to take the book and to break its seals; for You were slain, and purchased for God with Your blood men from every tribe and tongue and people and nation. “You have made them to be a kingdom and priests to our God; and they will reign upon the earth.” Then I looked, and I heard the voice of many angels around the throne and the living creatures and the elders; and the number of them was myriads of myriads, and thousands of thousands, saying with a loud voice,“Worthy is the Lamb that was slain to receive power and riches and wisdom and might and honor and glory and blessing.”
And every created thing which is in heaven and on the earth and under the earth and on the sea, and all things in them, I heard saying,“To Him who sits on the throne, and to the Lamb, be blessing and honor and glory and dominion forever and ever.”
And the four living creatures kept saying, “Amen.” And the elders fell down and worshiped.

Then I saw when the Lamb broke one of the seven seals, and I heard one of the four living creatures saying as with a voice of thunder, “Come.” I looked, and behold, a white horse, and he who sat on it had a bow; and a crown was given to him, and he went out conquering and to conquer. When He broke the second seal, I heard the second living creature saying, “Come.”

And they *sang a new song before the throne and before the four living creatures and the elders; and no one could learn the song except the one hundred and forty-four thousand who had been purchased from the earth.

Then one of the four living creatures gave to the seven angels seven golden bowls full of the wrath of God, who lives forever and ever.

And the twenty-four elders and the four living creatures fell down and worshiped God who sits on the throne saying, “Amen. Hallelujah!”

‘These great beasts, which are four in number, are four kings who will arise from the earth.

Then another sign appeared in heaven: and behold, a great red dragon having seven heads and ten horns, and on his heads were seven diadems. And his tail *swept away a third of the stars of heaven and threw them to the earth. And the dragon stood before the woman who was about to give birth, so that when she gave birth he might devour her child.

And the dragon stood on the sand of the seashore.Then I saw a beast coming up out of the sea, having ten horns and seven heads, and on his horns were ten diadems, and on his heads were blasphemous names.

Daniel said, “I was looking in my vision by night, and behold, the four winds of heaven were stirring up the great sea. And four great beasts were coming up from the sea, different from one another. The first was like a lion and had the wings of an eagle. I kept looking until its wings were plucked, and it was lifted up from the ground and made to stand on two feet like a man; a human mind also was given to it.read more.
And behold, another beast, a second one, resembling a bear. And it was raised up on one side, and three ribs were in its mouth between its teeth; and thus they said to it, ‘Arise, devour much meat!’ After this I kept looking, and behold, another one, like a leopard, which had on its back four wings of a bird; the beast also had four heads, and dominion was given to it. After this I kept looking in the night visions, and behold, a fourth beast, dreadful and terrifying and extremely strong; and it had large iron teeth. It devoured and crushed and trampled down the remainder with its feet; and it was different from all the beasts that were before it, and it had ten horns. While I was contemplating the horns, behold, another horn, a little one, came up among them, and three of the first horns were pulled out by the roots before it; and behold, this horn possessed eyes like the eyes of a man and a mouth uttering great boasts.

Then I lifted my eyes and looked, and behold, a ram which had two horns was standing in front of the canal. Now the two horns were long, but one was longer than the other, with the longer one coming up last. I saw the ram butting westward, northward, and southward, and no other beasts could stand before him nor was there anyone to rescue from his power, but he did as he pleased and magnified himself. While I was observing, behold, a male goat was coming from the west over the surface of the whole earth without touching the ground; and the goat had a conspicuous horn between his eyes.read more.
He came up to the ram that had the two horns, which I had seen standing in front of the canal, and rushed at him in his mighty wrath. I saw him come beside the ram, and he was enraged at him; and he struck the ram and shattered his two horns, and the ram had no strength to withstand him. So he hurled him to the ground and trampled on him, and there was none to rescue the ram from his power. Then the male goat magnified himself exceedingly. But as soon as he was mighty, the large horn was broken; and in its place there came up four conspicuous horns toward the four winds of heaven. Out of one of them came forth a rather small horn which grew exceedingly great toward the south, toward the east, and toward the Beautiful Land. It grew up to the host of heaven and caused some of the host and some of the stars to fall to the earth, and it trampled them down. It even magnified itself to be equal with the Commander of the host; and it removed the regular sacrifice from Him, and the place of His sanctuary was thrown down. And on account of transgression the host will be given over to the horn along with the regular sacrifice; and it will fling truth to the ground and perform its will and prosper.

When they have finished their testimony, the beast that comes up out of the abyss will make war with them, and overcome them and kill them.

And the beast which I saw was like a leopard, and his feet were like those of a bear, and his mouth like the mouth of a lion. And the dragon gave him his power and his throne and great authority. I saw one of his heads as if it had been slain, and his fatal wound was healed. And the whole earth was amazed and followed after the beast; they worshiped the dragon because he gave his authority to the beast; and they worshiped the beast, saying, “Who is like the beast, and who is able to wage war with him?”read more.
There was given to him a mouth speaking arrogant words and blasphemies, and authority to act for forty-two months was given to him. And he opened his mouth in blasphemies against God, to blaspheme His name and His tabernacle, that is, those who dwell in heaven. It was also given to him to make war with the saints and to overcome them, and authority over every tribe and people and tongue and nation was given to him. All who dwell on the earth will worship him, everyone whose name has not been written from the foundation of the world in the book of life of the Lamb who has been slain.

let me pass through your entire flock today, removing from there every

and before the throne there was something like a

This woman’s son died in the night, because she lay on it.

Then the Lord God formed man of

All go to the same place. All came from the

let them bring a royal robe which the king has worn, and

Destruction Of All Creatures

Whatever divides a hoof, thus making split hoofs, and chews the cud, among the animals, that you may eat.

He said, “Behold, it is still high day; it is not time for the livestock to be gathered. Water the sheep, and go, pasture them.”

Then God said, “Let the waters

Other Creatures Going Up

Other Dwellings Of Creatures

and he sent out a raven, and it

There also we saw the

Who knows that the

The Power Of Other Creatures

Daniel 8:4
Verse Concepts
According To His WillNorthRescue
BeastsNo One Can SaveThe Power Of Other Creatures

I saw the ram

Lo, seven other cows came up after them, poor and very ugly and