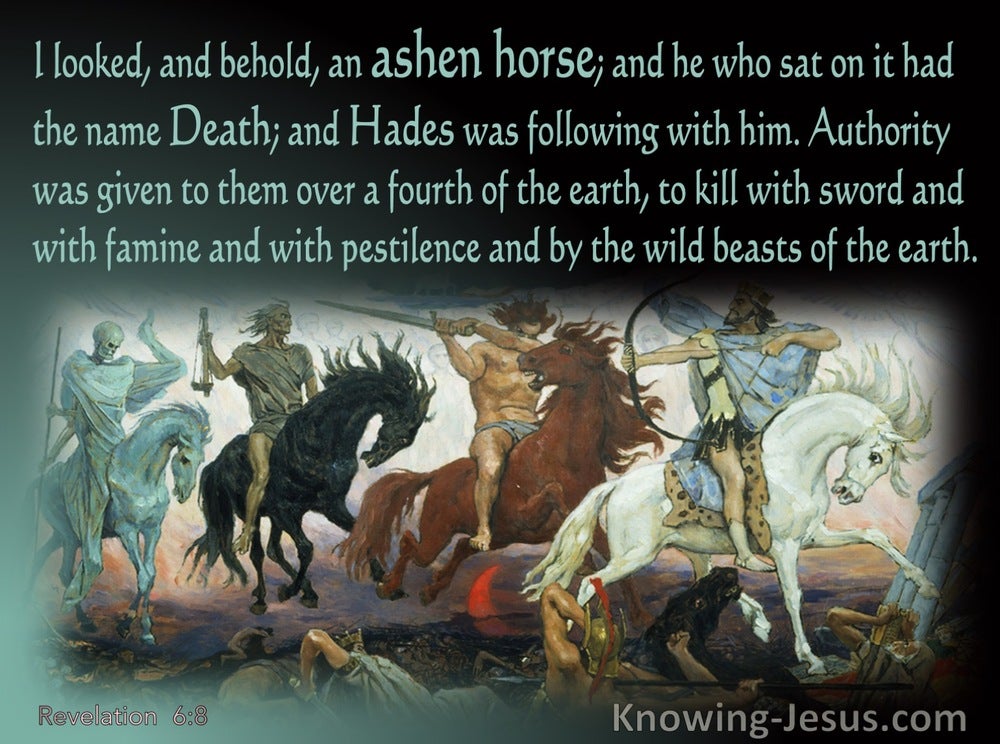 “Yet does not one in a heap of ruins stretch out his hand,
Or in his disaster therefore cry out for help?

Moreover, man does not know his time: like fish caught in a treacherous net and birds trapped in a snare, so the sons of men are ensnared at an evil time when it suddenly falls on them.

Isaiah 15:1
Verse Concepts
During One Night
Warfare, Strategies In

“Thus says the Lord God, ‘A disaster, unique disaster, behold it is coming!

Disaster will come upon disaster and rumor will be added to rumor; then they will seek a vision from a prophet, but the law will be lost from the priest and counsel from the elders.

When the Lamb broke the fourth seal, I heard the voice of the fourth living creature saying, “Come.” I looked, and behold, an ashen horse; and he who sat on it had the name Death; and Hades was following with him. Authority was given to them over a fourth of the earth, to kill with sword and with famine and with pestilence and by the wild beasts of the earth.

And huge hailstones, about one hundred pounds each, *came down from heaven upon men; and men blasphemed God because of the plague of the hail, because its plague *was extremely severe.

for in one hour such great wealth has been laid waste!’ And every shipmaster and every passenger and sailor, and as many as make their living by the sea, stood at a distance, and were crying out as they saw the smoke of her burning, saying, ‘What city is like the great city?’ And they threw dust on their heads and were crying out, weeping and mourning, saying, ‘Woe, woe, the great city, in which all who had ships at sea became rich by her wealth, for in one hour she has been laid waste!’

Upon the wicked He will rain snares;
Fire and brimstone and burning wind will be the portion of their cup.

“Inasmuch as these people have rejected the gently flowing waters of Shiloah
And rejoice in Rezin and the son of Remaliah;
“Now therefore, behold, the Lord is about to bring on them the strong and abundant waters of the Euphrates,
Even the king of Assyria and all his glory;
And it will rise up over all its channels and go over all its banks.