25 Bible Verses about Fathers, Sin Of The 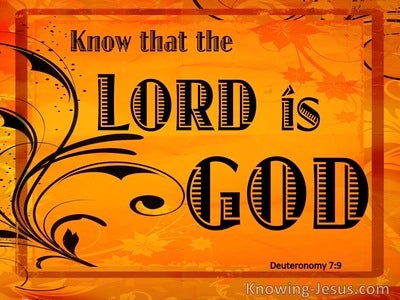 Then the Lord passed by in front of him and proclaimed, “The Lord, the Lord God, compassionate and gracious, slow to anger, and abounding in lovingkindness and truth; who keeps lovingkindness for thousands, who forgives iniquity, transgression and sin; yet He will by no means leave the guilty unpunished, visiting the iniquity of fathers on the children and on the grandchildren to the third and fourth generations.”

“You shall not make for yourself an idol, or any likeness of what is in heaven above or on the earth beneath or in the water under the earth. You shall not worship them or serve them; for I, the Lord your God, am a jealous God, visiting the iniquity of the fathers on the children, on the third and the fourth generations of those who hate Me, but showing lovingkindness to thousands, to those who love Me and keep My commandments.

‘You shall not make for yourself an idol, or any likeness of what is in heaven above or on the earth beneath or in the water under the earth. You shall not worship them or serve them; for I, the Lord your God, am a jealous God, visiting the iniquity of the fathers on the children, and on the third and the fourth generations of those who hate Me, but showing lovingkindness to thousands, to those who love Me and keep My commandments.

‘The Lord is slow to anger and abundant in lovingkindness, forgiving iniquity and transgression; but He will by no means clear the guilty, visiting the iniquity of the fathers on the children to the third and the fourth generations.’

In his days Hiel the Bethelite built Jericho; he laid its foundations with the loss of Abiram his firstborn, and set up its gates with the loss of his youngest son Segub, according to the word of the Lord, which He spoke by Joshua the son of Nun.

Job 21:19
Verse Concepts
Punishment of the The WickedParents Sin
Sins Of The Fathers

“You say, ‘God stores away a man’s iniquity for his sons.’
Let God repay him so that he may know it.

“Prepare for his sons a place of slaughter
Because of the iniquity of their fathers.
They must not arise and take possession of the earth
And fill the face of the world with cities.”

who shows lovingkindness to thousands, but repays the iniquity of fathers into the bosom of their children after them, O great and mighty God. The Lord of hosts is His name;

“In those days they will not say again,
‘The fathers have eaten sour grapes,
And the children’s teeth are set on edge.’
But everyone will die for his own iniquity; each man who eats the sour grapes, his teeth will be set on edge.

“As for Me, behold, My covenant is with you,
And you will be the father of a multitude of nations.
“No longer shall your name be called Abram,
But your name shall be Abraham;
For I have made you the father of a multitude of nations.
I will make you exceedingly fruitful, and I will make nations of you, and kings will come forth from you.read more.
I will establish My covenant between Me and you and your descendants after you throughout their generations for an everlasting covenant, to be God to you and to your descendants after you.

The Lord appeared to him the same night and said,
“I am the God of your father Abraham;
Do not fear, for I am with you.
I will bless you, and multiply your descendants,
For the sake of My servant Abraham.”

Know therefore that the Lord your God, He is God, the faithful God, who keeps His covenant and His lovingkindness to a thousandth generation with those who love Him and keep His commandments;

Behold, I, even I am bringing the flood of water upon the earth, to destroy all flesh in which is the breath of life, from under heaven; everything that is on the earth shall perish. But I will establish My covenant with you; and you shall enter the ark—you and your sons and your wife, and your sons’ wives with you.

On that day the Lord made a covenant with Abram, saying,
“To your descendants I have given this land,
From the river of Egypt as far as the great river, the river Euphrates:
the Kenite and the Kenizzite and the Kadmonite

Now it came about in the course of those many days that the king of Egypt died. And the sons of Israel sighed because of the bondage, and they cried out; and their cry for help because of their bondage rose up to God. So God heard their groaning; and God remembered His covenant with Abraham, Isaac, and Jacob. God saw the sons of Israel, and God took notice of them.

even from the day that I commanded judges to be over My people Israel; and I will give you rest from all your enemies. The Lord also declares to you that the Lord will make a house for you. When your days are complete and you lie down with your fathers, I will raise up your descendant after you, who will come forth from you, and I will establish his kingdom. He shall build a house for My name, and I will establish the throne of his kingdom forever.read more.
I will be a father to him and he will be a son to Me; when he commits iniquity, I will correct him with the rod of men and the strokes of the sons of men, but My lovingkindness shall not depart from him, as I took it away from Saul, whom I removed from before you. Your house and your kingdom shall endure before Me forever; your throne shall be established forever.”’”

“And His mercy is upon generation after generation
Toward those who fear Him.