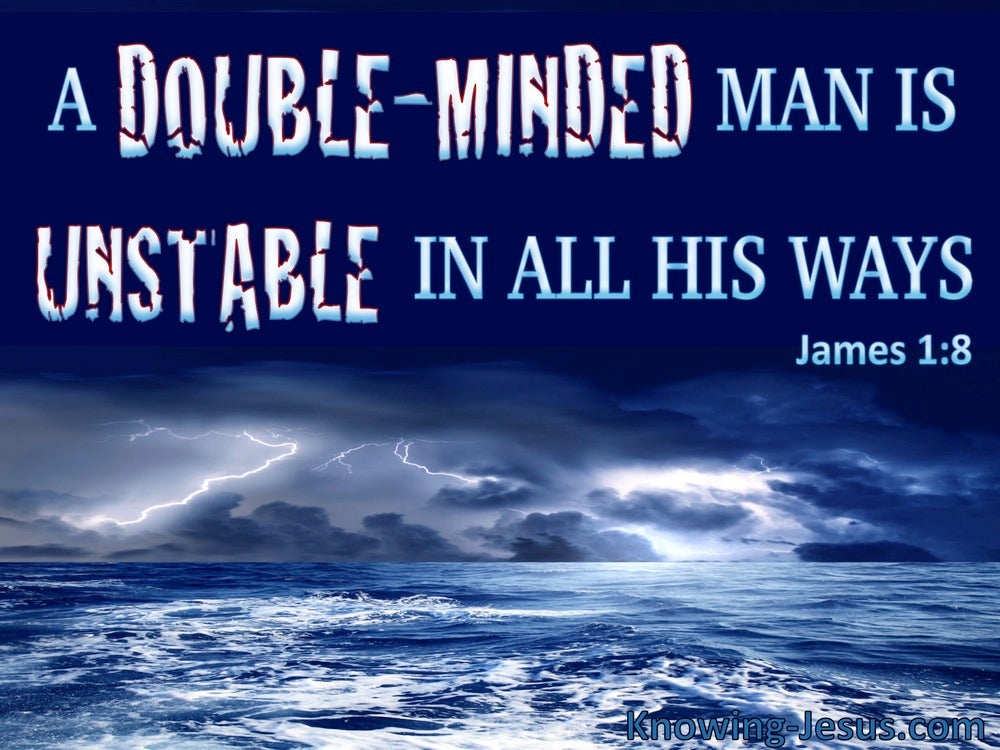 But he must ask in faith without any doubting, for the one who doubts is like the surf of the sea, driven and tossed by the wind. For that man ought not to expect that he will receive anything from the Lord, being a double-minded man, unstable in all his ways.

Elijah came near to all the people and said, “How long will you hesitate between two opinions? If the Lord is God, follow Him; but if Baal, follow him.” But the people did not answer him a word.

Immediately Jesus stretched out His hand and took hold of him, and *said to him, “You of little faith, why did you doubt?”

And Jesus answered and said to them, “Truly I say to you, if you have faith and do not doubt, you will not only do what was done to the fig tree, but even if you say to this mountain, ‘Be taken up and cast into the sea,’ it will happen.

Truly I say to you, whoever says to this mountain, ‘Be taken up and cast into the sea,’ and does not doubt in his heart, but believes that what he says is going to happen, it will be granted him.

But he said, “Please, Lord, now send the message by whomever You will.”

As Pharaoh drew near, the sons of Israel looked, and behold, the Egyptians were marching after them, and they became very frightened; so the sons of Israel cried out to the Lord. Then they said to Moses, “Is it because there were no graves in Egypt that you have taken us away to die in the wilderness? Why have you dealt with us in this way, bringing us out of Egypt? Is this not the word that we spoke to you in Egypt, saying, ‘Leave us alone that we may serve the Egyptians’? For it would have been better for us to serve the Egyptians than to die in the wilderness.”read more.
But Moses said to the people, “Do not fear! Stand by and see the salvation of the Lord which He will accomplish for you today; for the Egyptians whom you have seen today, you will never see them again forever. The Lord will fight for you while you keep silent.” Then the Lord said to Moses, “Why are you crying out to Me? Tell the sons of Israel to go forward.

Joshua 7:10
Verse Concepts
Get Up!
Indecision

So the Lord said to Joshua, “Rise up! Why is it that you have fallen on your face?

But the governor said to them, “Which of the two do you want me to release for you?” And they said, “Barabbas.” Pilate *said to them, “Then what shall I do with Jesus who is called Christ?” They all *said, “Crucify Him!” And he said, “Why, what evil has He done?” But they kept shouting all the more, saying, “Crucify Him!”read more.
When Pilate saw that he was accomplishing nothing, but rather that a riot was starting, he took water and washed his hands in front of the crowd, saying, “I am innocent of this Man’s blood; see to that yourselves.” And all the people said, “His blood shall be on us and on our children!” Then he released Barabbas for them; but after having Jesus scourged, he handed Him over to be crucified.

Pilate answered them, saying, “Do you want me to release for you the King of the Jews?” For he was aware that the chief priests had handed Him over because of envy. But the chief priests stirred up the crowd to ask him to release Barabbas for them instead.read more.
Answering again, Pilate said to them, “Then what shall I do with Him whom you call the King of the Jews?” They shouted back, “Crucify Him!” But Pilate said to them, “Why, what evil has He done?” But they shouted all the more, “Crucify Him!” Wishing to satisfy the crowd, Pilate released Barabbas for them, and after having Jesus scourged, he handed Him over to be crucified.

Pilate summoned the chief priests and the rulers and the people, and said to them, “You brought this man to me as one who incites the people to rebellion, and behold, having examined Him before you, I have found no guilt in this man regarding the charges which you make against Him. No, nor has Herod, for he sent Him back to us; and behold, nothing deserving death has been done by Him.read more.
Therefore I will punish Him and release Him.” [Now he was obliged to release to them at the feast one prisoner.] But they cried out all together, saying, “Away with this man, and release for us Barabbas!” (He was one who had been thrown into prison for an insurrection made in the city, and for murder.) Pilate, wanting to release Jesus, addressed them again, but they kept on calling out, saying, “Crucify, crucify Him!” And he said to them the third time, “Why, what evil has this man done? I have found in Him no guilt demanding death; therefore I will punish Him and release Him.” But they were insistent, with loud voices asking that He be crucified. And their voices began to prevail. And Pilate pronounced sentence that their demand be granted. And he released the man they were asking for who had been thrown into prison for insurrection and murder, but he delivered Jesus to their will.

Pilate *said to Him, “What is truth?”And when he had said this, he went out again to the Jews and *said to them, “I find no guilt in Him. But you have a custom that I release someone for you at the Passover; do you wish then that I release for you the King of the Jews?” So they cried out again, saying, “Not this Man, but Barabbas.” Now Barabbas was a robber.

When they heard that He was alive and had been seen by her, they refused to believe it. After that, He appeared in a different form to two of them while they were walking along on their way to the country. They went away and reported it to the others, but they did not believe them either.read more.
Afterward He appeared to the eleven themselves as they were reclining at the table; and He reproached them for their unbelief and hardness of heart, because they had not believed those who had seen Him after He had risen.

But as he was discussing righteousness, self-control and the judgment to come, Felix became frightened and said, “Go away for the present, and when I find time I will summon you.”

“No one can serve two masters; for either he will hate the one and love the other, or he will be devoted to one and despise the other. You cannot serve God and wealth.

No servant can serve two masters; for either he will hate the one and love the other, or else he will be devoted to one and despise the other. You cannot serve God and wealth.”

But when the young man heard this statement, he went away grieving; for he was one who owned much property.

So while these nations feared the Lord, they also served their idols; their children likewise and their grandchildren, as their fathers did, so they do to this day.

Their heart is faithless;
Now they must bear their guilt.
The Lord will break down their altars
And destroy their sacred pillars.

But Jesus said to him, “No one, after putting his hand to the plow and looking back, is fit for the kingdom of God.”

being a double-minded man, unstable in all his ways.

Draw near to God and He will draw near to you. Cleanse your hands, you sinners; and purify your hearts, you double-minded.

Indecision » Instances of » Rulers, who believed in jesus

Indecision » Instances of » Moses at the red sea

Then the Lord said to Moses, “Why are you crying out to Me? Tell the sons of Israel to go forward.

Indecision » Instances of » Joshua at ai

Joshua 7:10
Verse Concepts
Get Up!
Indecision

So the Lord said to Joshua, “Rise up! Why is it that you have fallen on your face?

But as he was discussing