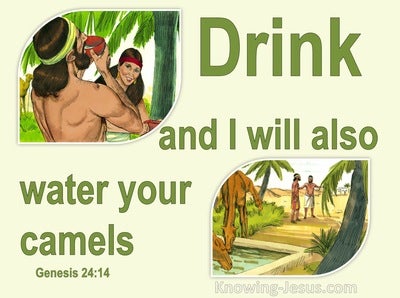 Please let a little water be brought and wash your feet, and rest yourselves under the tree;

So the man entered the house. Then Laban unloaded the camels, and he gave straw and feed to the camels, and water to wash his feet and the feet of the men who were with him.

Then God opened her eyes and she saw a well of water; and she went and filled the skin with water and gave the lad a drink.

now may it be that the girl to whom I say, ‘Please let down your jar so that I may drink,’ and who answers, ‘Drink, and I will water your camels also’—may she be the one whom You have appointed for Your servant Isaac; and by this I will know that You have shown lovingkindness to my master.”

Then the servant ran to meet her, and said, “Please let me drink a little water from your jar.”

behold, I am standing by the spring, and may it be that the maiden who comes out to draw, and to whom I say, “Please let me drink a little water from your jar”;

“Before I had finished speaking in my heart, behold, Rebekah came out with her jar on her shoulder, and went down to the spring and drew, and I said to her, ‘Please let me drink.’

There *came a woman of Samaria to draw water. Jesus *said to her, “Give Me a drink.”

Jesus answered and said to her, “If you knew the gift of God, and who it is who says to you, ‘Give Me a drink,’ you would have asked Him, and He would have given you living water.”

1 Samuel 30:11
Verse Concepts
Those Who Provided A Meal

And He said to them, “When you have entered the city, a man will meet you carrying a pitcher of water; follow him into the house that he enters.

The leaders said to them, “Let them live.” So they became hewers of wood and drawers of water for the whole congregation, just as the leaders had spoken to them.

Now therefore, you are cursed, and you shall never cease being slaves, both hewers of wood and drawers of water for the house of my God.”

Joshua 9:27
Verse Concepts
Statutes To This DaySacred Places
The Altar Of The LordFirewood

But Joshua made them that day hewers of wood and drawers of water for the congregation and for the altar of the Lord, to this day, in the place which He would choose.

Now when she had finished giving him a drink, she said, “I will draw also for your camels until they have finished drinking.”

and she will say to me, “You drink, and I will draw for your camels also”; let her be the woman whom the Lord has appointed for my master’s son.’

She quickly lowered her jar from her shoulder, and said, ‘Drink, and I will water your camels also’; so I drank, and she watered the camels also.

Now the priest of Midian had seven daughters; and they came to draw water and filled the troughs to water their father’s flock. Then the shepherds came and drove them away, but Moses stood up and helped them and watered their flock. When they came to Reuel their father, he said, “Why have you come back so soon today?”read more.
So they said, “An Egyptian delivered us from the hand of the shepherds, and what is more, he even drew the water for us and watered the flock.”

“Let me pass through your land. We will not turn off into field or vineyard; we will not drink water from wells. We will go by the king’s highway until we have passed through your border.”

Again, the sons of Israel said to him, “We will go up by the highway, and if I and my livestock do drink any of your water, then I will pay its price. Let me only pass through on my feet, nothing else.”

Therefore the Samaritan woman *said to Him, “How is it that You, being a Jew, ask me for a drink since I am a Samaritan woman?” (For Jews have no dealings with Samaritans.)

Turning toward the woman, He said to Simon, “Do you see this woman? I entered your house; you gave Me no water for My feet, but she has wet My feet with her tears and wiped them with her hair.