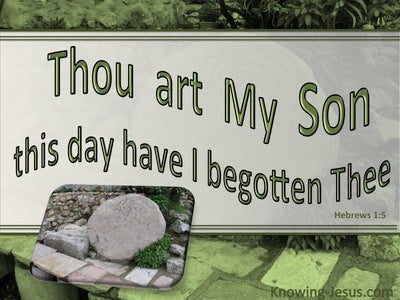 Genesis 21:2
Verse Concepts
The Time AppointedsarahcouplesbabyAgeHaving A Baby
Reproduction, After KindHope For Old PeopleThe Promise Of A BabyBarrenness, Examples OfArriving On TimeThe Elderly

So Sarah conceived and bore a son to Abraham in his old age, at the appointed time of which God had spoken to him.

He said, “I will surely return to you at this time next year; and behold, Sarah your wife will have a son.” And Sarah was listening at the tent door, which was behind him.

So she conceived and bore a son and said, “God has taken away my reproach.”

For behold, you shall conceive and give birth to a son, and no razor shall come upon his head, for the boy shall be a Nazirite to God from the womb; and he shall begin to deliver Israel from the hands of the Philistines.”

It came about in due time, after Hannah had conceived, that she gave birth to a son; and she named him Samuel, saying, “Because I have asked him of the Lord.”

After these days Elizabeth his wife became pregnant, and she kept herself in seclusion for five months, saying,

But if the woman has not defiled herself and is clean, she will then be free and conceive children.

He said, “What pledge shall I give you?” And she said, “Your seal and your cord, and your staff that is in your hand.” So he gave them to her and went in to her, and she conceived by him.

Genesis 38:25
Verse Concepts
SealsCords
Who Is The One?

It was while she was being brought out that she sent to her father-in-law, saying, “I am with child by the man to whom these things belong.” And she said, “Please examine and see, whose signet ring and cords and staff are these?”

The Lord visited Hannah; and she conceived and gave birth to three sons and two daughters. And the boy Samuel grew before the Lord.

But Naomi said, “Return, my daughters. Why should you go with me? Have I yet sons in my womb, that they may be your husbands?

Ruth 1:12
Verse Concepts
Not MarryingHope, Nature Of
Limitations Of Old PeopleWaiting Till Marriage

Return, my daughters! Go, for I am too old to have a husband. If I said I have hope, if I should even have a husband tonight and also bear sons,

So Boaz took Ruth, and she became his wife, and he went in to her. And the Lord enabled her to conceive, and she gave birth to a son.

Now the Lord saw that Leah was unloved, and He opened her womb, but Rachel was barren.

Then God remembered Rachel, and God gave heed to her and opened her womb.

“Let the day perish on which I was to be born,
And the night which said, ‘A boy is conceived.’

Job 31:15
Verse Concepts
Creation Of All MankindAbortionSanctity Of Life
WombMan, Creation OfBabies In The Womb

“Did not He who made me in the womb make him,
And the same one fashion us in the womb?

“Woe to him who says to a father, ‘What are you begetting?’
Or to a woman, ‘To what are you giving birth?’”

As for Ephraim, their glory will fly away like a bird—
No birth, no pregnancy and no conception!

asking, “Teacher, Moses said, ‘If a man dies having no children, his brother as next of kin shall marry his wife, and raise up children for his brother.’

“Teacher, Moses wrote for us that if a man’s brother dies and leaves behind a wife and leaves no child, his brother should marry the wife and raise up children to his brother.

and they questioned Him, saying, “Teacher, Moses wrote for us that if a man’s brother dies, having a wife, and he is childless, his brother should marry the wife and raise up children to his brother.

Therefore, I want younger widows to get married, bear children, keep house, and give the enemy no occasion for reproach;

“I will surely tell of the decree of the Lord:
He said to Me, ‘You are My Son,
Today I have begotten You.

For to which of the angels did He ever say,
“You are My Son,
Today I have begotten You”? And again,“I will be a Father to Him
And He shall be a Son to Me”?

So also Christ did not glorify Himself so as to become a high priest, but He who said to Him,
“You are My Son,
Today I have begotten You”;

But when he had considered this, behold, an angel of the Lord appeared to him in a dream, saying, “

Now the birth of Jesus

"And behold, you will conceive in your womb and bear a son, and you shall name Him Jesus. "He will be great and will be called the Son of the Most High; and the Lord God will give Him the throne of His father David; and He will reign over the house of Jacob forever, and His kingdom will have no end." read more.
Mary said to the angel, "How can this be, since I am a virgin?" The angel answered and said to her, "The Holy Spirit will come upon you, and the power of the Most High will overshadow you; and for that reason the holy Child shall be called the Son of God.

After these days Elizabeth his wife became pregnant, and she kept herself in seclusion for five months, saying, "This is the way the Lord has dealt with me in the days when He looked with favor upon me, to take away my disgrace among men."

"And behold, even your relative Elizabeth has also conceived a son in her old age; and she who was called barren is now in her sixth month. "For nothing will be impossible with God."

Her neighbors and her relatives heard that the Lord had

Then they arose early in the morning and worshiped before the LORD, and returned again to their house in Ramah And Elkanah had relations with Hannah his wife, and the LORD remembered her. It came about in due time, after Hannah had conceived, that she gave birth to a son; and she named him Samuel, saying, "Because I have asked him of the LORD."

Then the LORD took note of Sarah as He had said, and the LORD did for Sarah as He had promised. So Sarah conceived and bore a son to Abraham in his old age, at the appointed time of which God had spoken to him.

Isaac prayed to the Lord on behalf of his wife, because she was barren; and