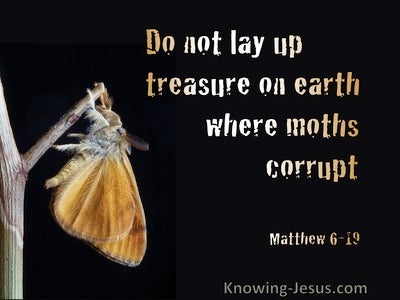 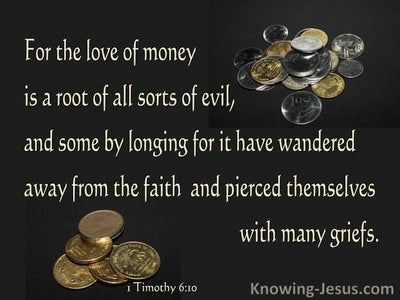 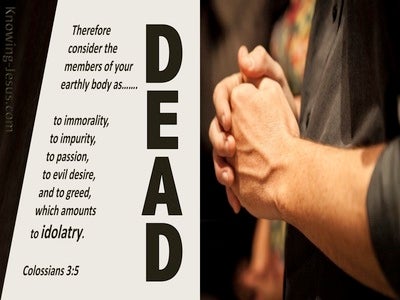 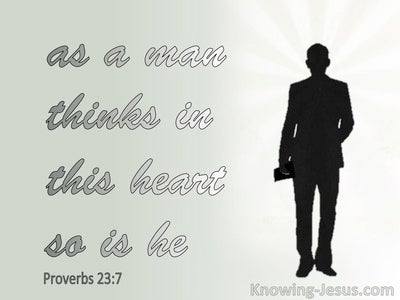 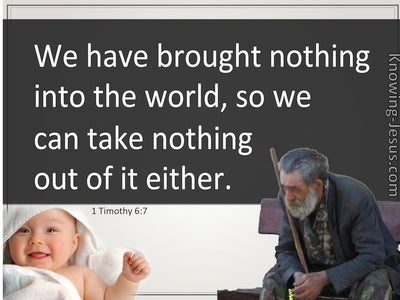 The rich man's wealth is his strong city and as a high wall in his imagination.

He that withholds the grain, the people shall curse him, but blessing shall be upon the head of him that sells it.

But a certain man named Ananias, with Sapphira his wife, sold a possession and defrauded of the price, his wife also being aware of it, and brought a certain part and laid it at the apostles' feet. But Peter said, Ananias, why has Satan filled thy heart to lie to the Holy Spirit and to defraud of the price of the land?read more.
Retaining it, was it not thy own? and after it was sold, was it not in thine own power? Why hast thou conceived this thing in thy heart? Thou hast not lied unto men, but unto God. Then Ananias, hearing these words, fell down and gave up the spirit; and great fear came on all those that heard these things. And the young men arose, wound him up, and carried him out and buried him. And it was about the space of three hours after, when his wife, not knowing what was done, came in. Then Peter answered unto her, Tell me whether ye sold the land for so much? And she said, Yes, for so much. Then Peter said unto her, How is it that ye have agreed together to tempt the Spirit of the Lord? Behold, the feet of those who have buried thy husband are at the door and shall carry thee out. Then she fell down straightway at his feet and yielded up the spirit; and the young men came in and found her dead and, carrying her forth, buried her by her husband. And great fear came upon all the congregation and upon as many as heard these things.

And he spoke a parable unto them, saying, The ground of a certain rich man brought forth plentifully; and he thought within himself, saying, What shall I do because I have no room where to bestow my fruits? And he said, This will I do: I will pull down my storehouses and build greater, and there will I bestow all my fruits and my goods.read more.
And I will say to my soul, Soul, thou hast many goods laid up for many years; take thine ease, eat, drink, and be merry. But God said unto him, Thou fool, this night thy soul shall be required of thee; then whose shall those things be which thou hast stored up? So is he that lays up treasure for himself and is not rich in God.

And he said unto them, Take heed and beware of all covetousness; for a man's life consists not in the abundance of the things which he possesses.

Lay not up for yourselves treasures upon the earth, where moth and rust corrupt, and where thieves break through and steal;

For the love of money is the root of all evil, which while some coveted after, they have erred from the faith and pierced themselves through with many sorrows.

God shall likewise cast thee down for ever; he shall cut thee off and pluck thee out of thy dwelling place and root thee out of the land of the living. Selah.

There is another sore evil which I have seen under the sun, namely, riches kept for the owners thereof to their hurt;

Whosoever stops his ears at the cry of the poor, he also shall cry himself but shall not be heard.

Do not eat the bread of anyone who has an evil eye, neither desire his dainty foods; for as he thinks in his soul, so is he; Eat and drink, he shall say unto thee, but his heart is not with thee. Didst thou eat thy part? Thou shalt vomit it up and lose thy sweet words.

Then I returned, and I saw another vanity under the sun. It is the man who is alone, without a successor, who has neither son nor brother; yet is there no end of all his labour; neither is his eye satisfied with riches; neither saith he, For whom do I labour and bereave my soul of good? This is also vanity and sore travail.

For we brought nothing into this world, and it is certain we can carry nothing out.

For those that desire to be rich fall into temptation and a snare, and into many foolish and hurtful lusts which drown men in destruction and perdition. For the love of money is the root of all evil, which while some coveted after, they have erred from the faith and pierced themselves through with many sorrows.

But a certain man named Ananias, with Sapphira his wife, sold a possession and defrauded of the price, his wife also being aware of it, and brought a certain part and laid it at the apostles' feet.

For they do not know to do right, said the LORD, storing up violence and robbery in their palaces.