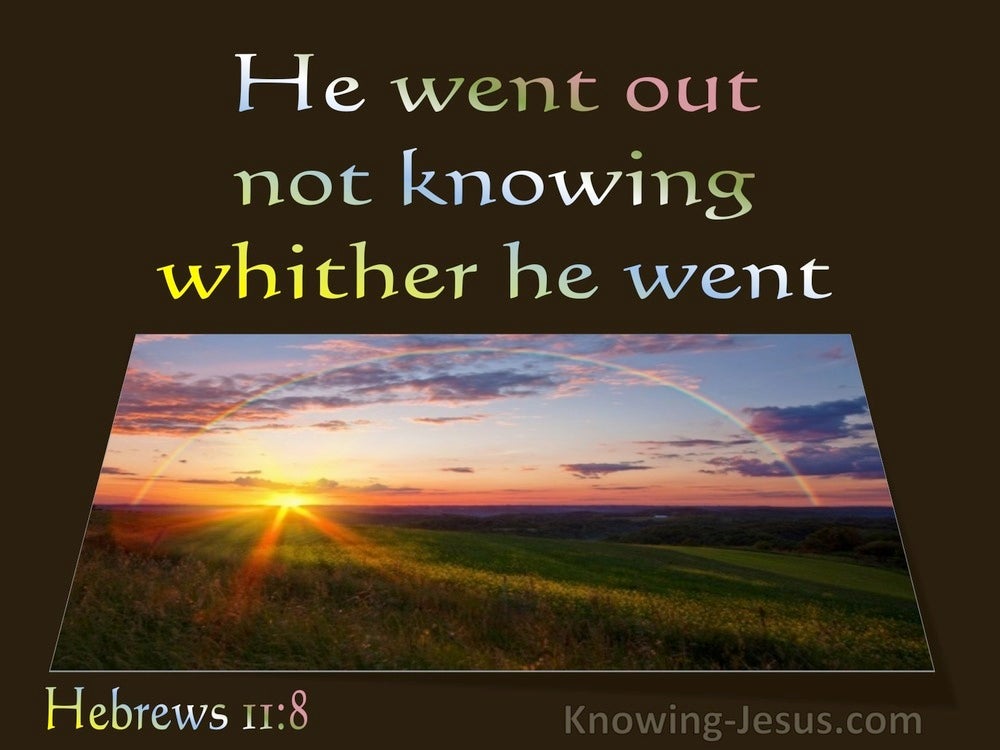 When they were only a few men in number,
Very few, and strangers in it.
And they wandered about from nation to nation,
From one kingdom to another people.

By faith Abraham, when he was called, obeyed by going out to a place which he was to receive for an inheritance; and he went out, not knowing where he was going. By faith he lived as an alien in the land of promise, as in a foreign land, dwelling in tents with Isaac and Jacob, fellow heirs of the same promise;

Then he proceeded from there to the mountain on the east of Bethel, and pitched his tent, with Bethel on the west and Ai on the east; and there he built an altar to the Lord and called upon the name of the Lord.

He went on his journeys from the Negev as far as Bethel, to the place where his tent had been at the beginning, between Bethel and Ai,

So he built an altar there and called upon the name of the Lord, and pitched his tent there; and there Isaac’s servants dug a well.

Then Israel journeyed on and pitched his tent beyond the tower of Eder.

You shall answer and say before the Lord your God, ‘My father was a wandering Aramean, and he went down to Egypt and sojourned there, few in number; but there he became a great, mighty and populous nation.

Saying, “To you I will give the land of Canaan,
As the portion of your inheritance.”
When they were only a few in number,
Very few, and strangers in it,
And they wandered about from nation to nation,
And from one kingdom to another people,

Numbers 32:13
Verse Concepts
God Led Them Through The WildernesswanderingDying In The Desert The HomelessForty Years40 To 50 Years
GenerationsHomelessnessAnger Of God, ConsequencesThe Number FortyWaiting For God's Timing

So the Lord’s anger burned against Israel, and He made them wander in the wilderness forty years, until the entire generation of those who had done evil in the sight of the Lord was destroyed.

for I have not dwelt in a house since the day that I brought up Israel to this day, but I have gone from tent to tent and from one dwelling place to another. In all places where I have walked with all Israel, have I spoken a word with any of the judges of Israel, whom I commanded to shepherd My people, saying, ‘Why have you not built for Me a house of cedar?’”’

Adah gave birth to Jabal; he was the father of those who dwell in tents and have livestock.

For it was when Israel had sown, that the Midianites would come up with the Amalekites and the sons of the east and go against them.

I saw the tents of Cushan under distress,
The tent curtains of the land of Midian were trembling.

Psalm 120:5
Verse Concepts
I Am Suffering

Woe is me, for I sojourn in Meshech,
For I dwell among the tents of Kedar!

Concerning Kedar and the kingdoms of Hazor, which Nebuchadnezzar king of Babylon defeated. Thus says the Lord,
“Arise, go up to Kedar
And devastate the men of the east.
“They will take away their tents and their flocks;
They will carry off for themselves
Their tent curtains, all their goods and their camels,
And they will call out to one another, ‘Terror on every side!’

therefore, behold, I am going to give you to the sons of the east for a possession, and they will set their encampments among you and make their dwellings among you; they will eat your fruit and drink your milk.

It will never be inhabited or lived in from generation to generation;
Nor will the Arab pitch his tent there,
Nor will shepherds make their flocks lie down there.

The word which came to Jeremiah from the Lord in the days of Jehoiakim the son of Josiah, king of Judah, saying, “Go to the house of the Rechabites and speak to them, and bring them into the house of the Lord, into one of the chambers, and give them wine to drink.” Then I took Jaazaniah the son of Jeremiah, son of Habazziniah, and his brothers and all his sons and the whole house of the Rechabites,read more.
and I brought them into the house of the Lord, into the chamber of the sons of Hanan the son of Igdaliah, the man of God, which was near the chamber of the officials, which was above the chamber of Maaseiah the son of Shallum, the doorkeeper. Then I set before the men of the house of the Rechabites pitchers full of wine and cups; and I said to them, “Drink wine!” But they said, “We will not drink wine, for Jonadab the son of Rechab, our father, commanded us, saying, ‘You shall not drink wine, you or your sons, forever. You shall not build a house, and you shall not sow seed and you shall not plant a vineyard or own one; but in tents you shall dwell all your days, that you may live many days in the land where you sojourn.’ We have obeyed the voice of Jonadab the son of Rechab, our father, in all that he commanded us, not to drink wine all our days, we, our wives, our sons or our daughters, nor to build ourselves houses to dwell in; and we do not have vineyard or field or seed. We have only dwelt in tents, and have obeyed and have done according to all that Jonadab our father commanded us. But when Nebuchadnezzar king of Babylon came up against the land, we said, ‘Come and let us go to Jerusalem before the army of the Chaldeans and before the army of the Arameans.’ So we have dwelt in Jerusalem.”

Gideon went up by the way of those who lived in tents on the east of Nobah and Jogbehah, and attacked the camp when the camp was unsuspecting.

“Lift up your eyes to the bare heights and see;
Where have you not been violated?
By the roads you have sat for them
Like an Arab in the desert,
And you have polluted a land
With your harlotry and with your wickedness.

Beloved, I urge you as aliens and strangers to abstain from fleshly lusts which wage war against the soul.

All these died in faith, without receiving the promises, but having seen them and having welcomed them from a distance, and having confessed that they were strangers and exiles on the earth. For those who say such things make it clear that they are seeking a country of their own. And indeed if they had been thinking of that country from which they went out, they would have had opportunity to return.read more.
But as it is, they desire a better country, that is, a heavenly one. Therefore God is not ashamed to be called their God; for He has prepared a city for them.

If you address as Father the One who impartially judges according to each one’s work, conduct yourselves in fear during the time of your stay on earth;