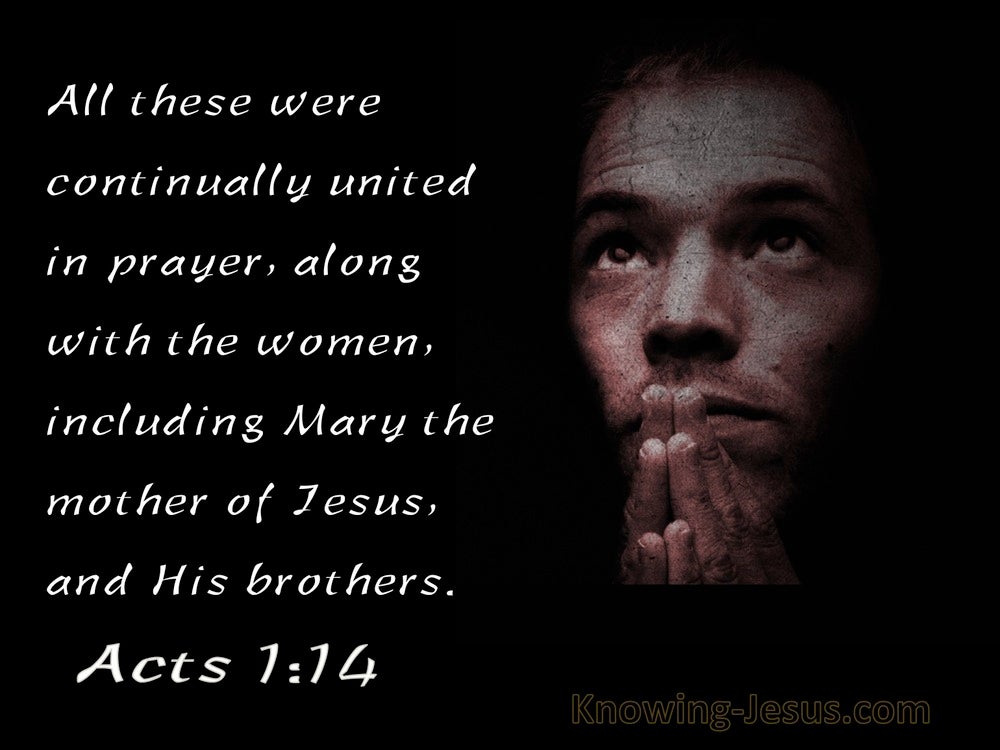 “Again I say to you, that if two of you agree on earth about anything that they may ask, it shall be done for them by My Father who is in heaven.

And the whole multitude of the people were in prayer outside at the hour of the incense offering.

When they had entered the city, they went up to the upper room where they were staying; that is, Peter and John and James and Andrew, Philip and Thomas, Bartholomew and Matthew, James the son of Alphaeus, and Simon the Zealot, and Judas the son of James.

So Peter was kept in the prison, but prayer for him was being made fervently by the church to God. On the very night when Herod was about to bring him forward, Peter was sleeping between two soldiers, bound with two chains, and guards in front of the door were watching over the prison. And behold, an angel of the Lord suddenly appeared and a light shone in the cell; and he struck Peter’s side and woke him up, saying, “Get up quickly.” And his chains fell off his hands.read more.
And the angel said to him, “Gird yourself and put on your sandals.” And he did so. And he *said to him, “Wrap your cloak around you and follow me.” And he went out and continued to follow, and he did not know that what was being done by the angel was real, but thought he was seeing a vision. When they had passed the first and second guard, they came to the iron gate that leads into the city, which opened for them by itself; and they went out and went along one street, and immediately the angel departed from him. When Peter came to himself, he said, “Now I know for sure that the Lord has sent forth His angel and rescued me from the hand of Herod and from all that the Jewish people were expecting.” And when he realized this, he went to the house of Mary, the mother of John who was also called Mark, where many were gathered together and were praying. When he knocked at the door of the gate, a servant-girl named Rhoda came to answer. When she recognized Peter’s voice, because of her joy she did not open the gate, but ran in and announced that Peter was standing in front of the gate. They said to her, “You are out of your mind!” But she kept insisting that it was so. They kept saying, “It is his angel.” But Peter continued knocking; and when they had opened the door, they saw him and were amazed. But motioning to them with his hand to be silent, he described to them how the Lord had led him out of the prison. And he said, “Report these things to James and the brethren.” Then he left and went to another place.

And on the Sabbath day we went outside the gate to a riverside, where we were supposing that there would be a place of prayer; and we sat down and began speaking to the women who had assembled.

And when they heard this, they lifted their voices to God with one accord and said, “O Lord, it is You who made the heaven and the earth and the sea, and all that is in them,

Now Peter and John were going up to the temple at the ninth hour, the hour of prayer.

These all with one mind

And when they heard this, they lifted their voices to God with one accord and said, “O

And when he realized this, he went to the house of Mary, the mother of