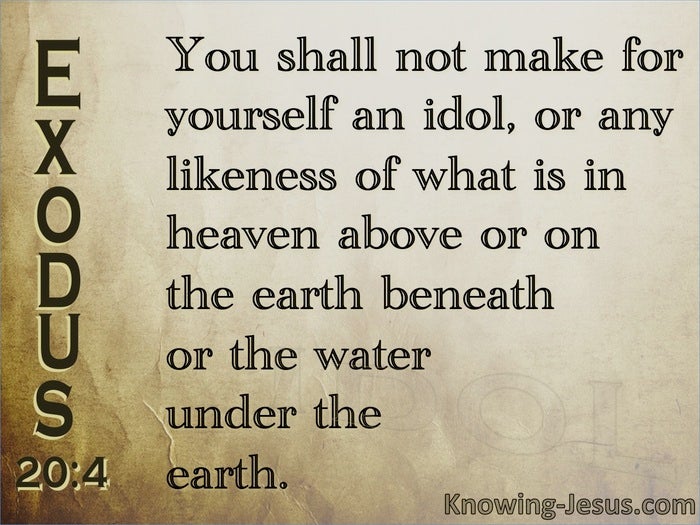 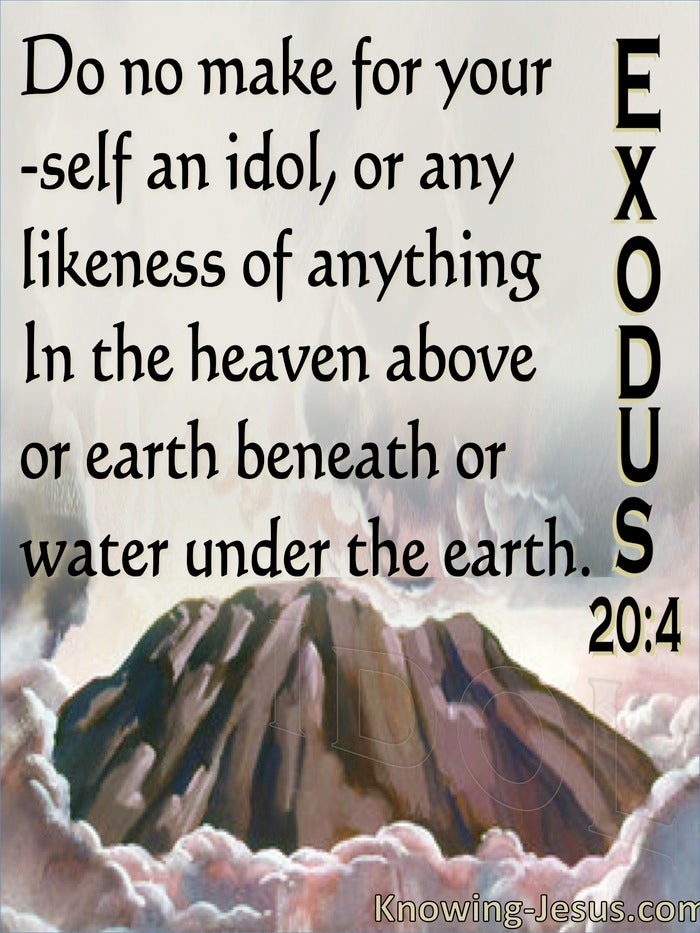 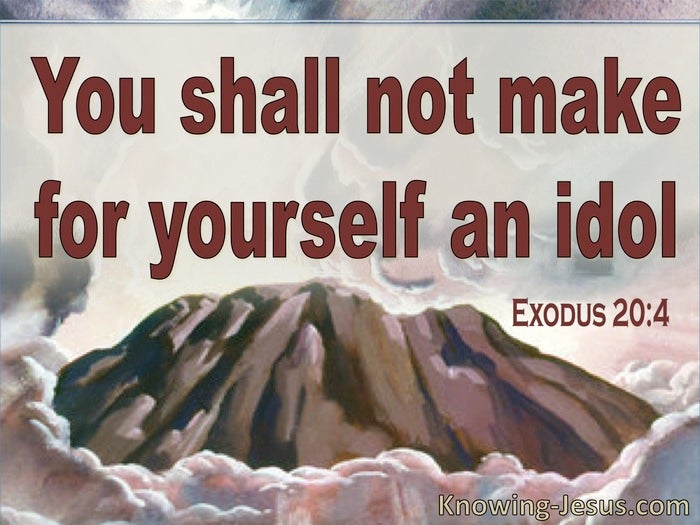 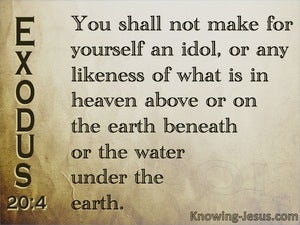 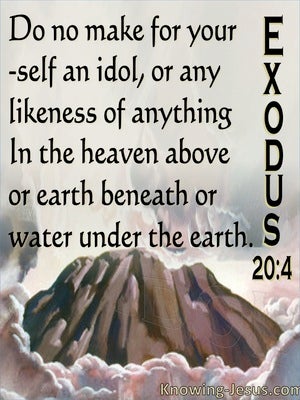 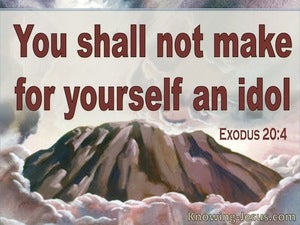 3 You are to have no other gods but me. 4 You are not to make an image or picture of anything in heaven or on the earth or in the waters under the earth: 5 You may not go down on your faces before them or give them worship: for I, the Lord your God, am a God who will not give his honour to another; and I will send punishment on the children for the wrongdoing of their fathers, to the third and fourth generation of my haters;

Do not make images of false gods, or put up an image cut in stone or a pillar or any pictured stone in your land, to give worship to it; for I am the Lord your God.

So keep watch on yourselves with care; for you saw no form of any sort on the day when the voice of the Lord came to you in Horeb out of the heart of the fire:

Cursed is the man who makes any image of wood or stone or metal, disgusting to the Lord, the work of man's hands, and puts it up in secret. And let all the people say, So be it.

Shamed be all those who give worship to images, and take pride in false gods; give him worship, all you gods.

Do not go after false gods, and do not make metal images of gods for yourselves: I am the Lord your God.

If then we are the offspring of God, it is not right for us to have the idea that God is like gold or silver or stone, formed by the art or design of man.

And when the people saw that Moses was a long time coming down from the mountain, they all came to Aaron and said to him, Come, make us a god to go before us: as for this Moses, who took us up out of the land of Egypt, we have no idea what has become of him.

Even now they are turned away from the rule I gave them, and have made themselves a metal ox and given worship to it and offerings, saying, This is your god, O Israel, who took you up out of the land of Egypt.

For they said to me, Make us a god to go before us: as for this Moses, who took us up out of the land of Egypt, we have no idea what has come to him.

Make for yourselves no gods of metal.

Take care that you do not let the agreement of the Lord your God, which he has made with you, go out of your mind, or make for yourselves images of any sort, against the orders which the Lord your God has given you.

You may not make for yourselves an image in the form of anything in heaven or on earth or in the waters under the earth:

So after taking thought the king made two oxen of gold; and he said to the people, You have been going up to Jerusalem long enough; see! these are your gods, O Israel, who took you out of the land of Egypt.

And he put the image he had made in the house of God, the house of which God had said to David and to Solomon his son, In this house, and in Jerusalem, the town which I have made mine out of all the tribes of Israel, will I put my name for ever:

Their images are silver and gold, the work of men's hands.

The images of the nations are silver and gold, the work of men's hands.

Whom then is God like, in your opinion? or what will you put forward as a comparison with him?

I am the Lord; that is my name: I will not give my glory to another, or my praise to pictured images.

They will be turned back and be greatly shamed who put their hope in pictured images, who say to metal images, You are our gods.

Those who make a pictured image are all of them as nothing, and the things of their desire will be of no profit to them: and their servants see not, and have no knowledge; so they will be put to shame.

All those who have gone against him will be put to shame; the makers of images will be made low.

Who in your eyes is my equal? or what comparison will you make with me?

For that which is feared by the people is foolish: it is the work of the hands of the workman; for a tree is cut down by him out of the woods with his axe.

But they are together like beasts and foolish: the teaching of false gods is wood.

Then every man becomes like a beast without knowledge; every gold-worker is put to shame by the image he has made: for his metal image is deceit, and there is no breath in them.

So I went in and saw; and there every sort of living thing which goes flat on the earth, and unclean beasts, and all the images of the children of Israel, were pictured round about on the wall.

And you see, for it has come to your ears, that not only at Ephesus, but almost all through Asia, this Paul has been teaching numbers of people and turning them away, saying that those are not gods who are made by men's hands:

And by them the glory of the eternal God was changed and made into the image of man who is not eternal, and of birds and beasts and things which go on the earth.

And the rest of the people, who were not put to death by these evils, were not turned from the works of their hands, but went on giving worship to evil spirits, and images of gold and silver and brass and stone and wood which have no power of seeing or hearing or walking:

And a third angel came after them, saying with a loud voice, If any man gives worship to the beast and his image, and has his mark on his brow or on his hand,

And the first went, and let what was in his vessel come down on the earth; and it became an evil poisoning wound on the men who had the mark of the beast, and who gave worship to his image.