And blessed (happy, fortunate, and to be envied) is he who takes no offense at Me and finds no cause for stumbling in or through Me and is not hindered from seeing the Truth.

"And blessed is he who does not take offense at Me."

And blessed is he, whosoever shall not be offended in me.

How blessed is anyone who is not offended by me!"

And blessed is he, whoever will not be caused to stumble by me.

And blessed is he, whosoever shall find no occasion of stumbling in me.

The person who does not find an occasion for having doubts about my identity is fortunate indeed."

and blessed is he that shall find in me no cause of offense.

And a blessing will be on him who has no doubts about me.

And blessed is he who is not offended because of me."

and happy is he who does not stumble at my appearance.

and blessed is whosoever shall not be offended in me.

and blessed is he, whosoever may not be offended in me.

And blessed is the man who finds nothing that repels him in me."

And as they departed,

And blessed is he who is not offended in me.

And happy is he who shall not give cause of offence in me.

And blessed is he, whosoever shall not be offended in me.

And whoever is not offended by me is blessed."

And blessed is he, whoever shall not be offended in Me.

And blessed is he that is not offended by me."

And blessed is he who is repelled by nothing in me!"

"And blessed is the man who finds no cause of stumbling in me."

Blessed is anyone who takes no offense at me."

And blessed is he who is not offended by me."

and blessed is he, whoever shall find no occasion of stumbling in me.

and blessed is he that is not offended with me.

And, happy, is he, whosoever shall not find cause of stumbling, in me.

And blessed is he whosoever shall not be offended at me.

And blessed is the man who finds no hindrance in me."

And blessed is he to whom I shall not be the cause of his falling into sin.

and blessed is every one who does not stumble and fall because of my claims."

And happy is the man who finds no cause for stumbling over me."

Blessed is he who finds no occasion for stumbling in me."

And happy is he, whosoever shall find no occasion of stumbling in Me."

and happy is the man who shall not be offended at any thing in me.

and happy is he who may not be stumbled in me.'

the Blessed » Who are not offended at Christ

Miracles » Jesus was proved to be the messiah by

Offence » Blessedness of not taking, at Christ

Offense » Those that are not offended in Christ

The Blessedness of the Unoffended

Word Count of 38 Translations in Matthew 11:6 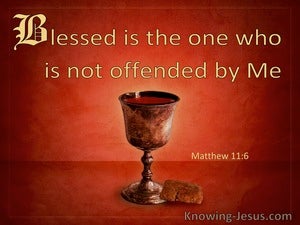 A Question From John The Baptist

5 The blind receive their sight and the lame walk, lepers are cleansed (by healing) and the deaf hear, the dead are raised up and the poor have good news (the Gospel) preached to them. 6 And blessed (happy, fortunate, and to be envied) is he who takes no offense at Me and finds no cause for stumbling in or through Me and is not hindered from seeing the Truth. 7 Then as these men went their way, Jesus began to speak to the crowds about John: What did you go out in the wilderness (desert) to see? A reed swayed by the wind?

And He shall be a sanctuary [a sacred and indestructible asylum to those who reverently fear and trust in Him]; but He shall be a Stone of stumbling and a Rock of offense to both the houses of Israel, a trap and a snare to the inhabitants of Jerusalem.

And then many will be offended and repelled and will begin to distrust and desert [Him Whom they ought to trust and obey] and will stumble and fall away and betray one another and pursue one another with hatred.

Then Jesus said to them, You will all be offended and stumble and fall away because of Me this night [distrusting and deserting Me], for it is written, I will strike the Shepherd, and the sheep of the flock will be scattered.

But the natural, nonspiritual man does not accept or welcome or admit into his heart the gifts and teachings and revelations of the Spirit of God, for they are folly (meaningless nonsense) to him; and he is incapable of knowing them [of progressively recognizing, understanding, and becoming better acquainted with them] because they are spiritually discerned and estimated and appreciated.

Blessed (happy, fortunate, prosperous, and enviable) is the man who walks and lives not in the counsel of the ungodly [following their advice, their plans and purposes], nor stands [submissive and inactive] in the path where sinners walk, nor sits down [to relax and rest] where the scornful [and the mockers] gather.

Blessed (happy, fortunate, to be envied) is he who has forgiveness of his transgression continually exercised upon him, whose sin is covered.

Blessed (happy, fortunate, to be envied) are the undefiled (the upright, truly sincere, and blameless) in the way [of the revealed will of God], who walk (order their conduct and conversation) in the law of the Lord (the whole of God's revealed will).

Blessed (happy, to be envied, and spiritually prosperous -- " with life-joy and satisfaction in God's favor and salvation, regardless of their outward conditions) are the poor in spirit (the humble, who rate themselves insignificant), for theirs is the kingdom of heaven!

Is not this the carpenter's Son? Is not His mother called Mary? And are not His brothers James and Joseph and Simon and Judas?

Then the disciples came and said to Him, Do You know that the Pharisees were displeased and offended and indignant when they heard this saying?

Woe to the world for such temptations to sin and influences to do wrong! It is necessary that temptations come, but woe to the person on whose account or by whom the temptation comes!

And Simeon blessed them and said to Mary His mother, Behold, this Child is appointed and destined for the fall and rising of many in Israel, and for a sign that is spoken against -- "

So He said to them, You will doubtless quote to Me this proverb: Physician, heal Yourself! What we have learned by hearsay that You did in Capernaum, do here also in Your [own] town.

Now it occurred that as He was saying these things, a certain woman in the crowd raised her voice and said to Him, Blessed (happy and to be envied) is the womb that bore You and the breasts that You sucked!

When His disciples heard this, many of them said, This is a hard and difficult and strange saying (an offensive and unbearable message). Who can stand to hear it? [Who can be expected to listen to such teaching?]

After this, many of His disciples drew back (returned to their old associations) and no longer accompanied Him.

Others said, This is the Christ (the Messiah, Anointed One)! But some said, What? Does the Christ come out of Galilee?

For what reason? Because [they pursued it] not through faith, relying [instead] on the merit of their works [they did not depend on faith but on what they could do]. They have stumbled over the Stumbling Stone.

For while Jews [demandingly] ask for signs and miracles and Greeks pursue philosophy and wisdom,

But, brethren, if I still preach circumcision [as some accuse me of doing, as necessary to salvation], why am I still suffering persecution? In that case the cross has ceased to be a stumbling block and is made meaningless (done away).

And, A Stone that will cause stumbling and a Rock that will give [men] offense; they stumble because they disobey and disbelieve [God's] Word, as those [who reject Him] were destined (appointed) to do.