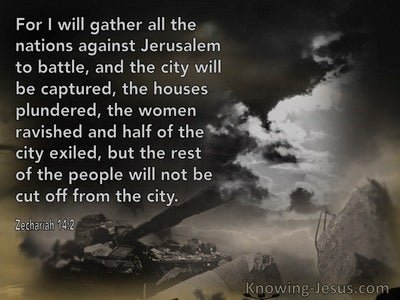 Then the king and his men advanced to Jerusalem against the Jebusites who lived in the land. The Jebusites said to David, "You cannot invade this place! Even the blind and the lame will turn you back, saying, 'David cannot invade this place!'" But David captured the fortress of Zion (that is, the city of David). David said on that day, "Whoever attacks the Jebusites must approach the 'lame' and the 'blind' who are David's enemies by going through the water tunnel." For this reason it is said, "The blind and the lame cannot enter the palace."read more.
So David lived in the fortress and called it the City of David. David built all around it, from the terrace inwards.

So Joab fought against Rabbah of the Ammonites and captured the royal city.

So David assembled all the army and went to Rabbah and fought against it and captured it.

(Pharaoh, king of Egypt, had attacked and captured Gezer. He burned it and killed the Canaanites who lived in the city. He gave it as a wedding present to his daughter, who had married Solomon.)

At that time King Hazael of Syria attacked Gath and captured it. Hazael then decided to attack Jerusalem.

Jehoahaz's son Jehoash took back from Ben Hadad son of Hazael the cities that he had taken from his father Jehoahaz in war. Joash defeated him three times and recovered the Israelite cities.

2 Kings 15:29
Verse Concepts
List Of Kings Of IsraelArmies, Against Israel
Exile Of Israel To AssyriaExile, in assyria

During Pekah's reign over Israel, King Tiglath-pileser of Assyria came and captured Ijon, Abel Beth Maacah, Janoah, Kedesh, Hazor, Gilead, and Galilee, including all the territory of Naphtali. He deported the people to Assyria.

2 Kings 16:6
Verse Concepts
Where People Live To This Day

(At that time King Rezin of Syria recovered Elat for Syria; he drove the Judahites from there. Syrians arrived in Elat and live there to this very day.)

The king of Assyria responded favorably to his request; he attacked Damascus and captured it. He deported the people to Kir and executed Rezin.

In the ninth year of Hoshea's reign, the king of Assyria captured Samaria and deported the people of Israel to Assyria. He settled them in Halah, along the Habor (the river of Gozan), and in the cities of the Medes.

After three years he captured it (in the sixth year of Hezekiah's reign); in the ninth year of King Hoshea's reign over Israel Samaria was captured.

In the fourteenth year of King Hezekiah's reign, King Sennacherib of Assyria marched up against all the fortified cities of Judah and captured them.

Her towns will be captured. Her fortresses will be taken. At that time the soldiers of Moab will be frightened like a woman in labor.

For I will gather all the nations against Jerusalem to wage war; the city will be taken, its houses plundered, and the women raped. Then half of the city will go into exile, but the remainder of the people will not be taken away.

For King Zedekiah had confined Jeremiah there after he had reproved him for prophesying as he did. He had asked Jeremiah, "Why do you keep prophesying these things? Why do you keep saying that the Lord says, 'I will hand this city over to the king of Babylon? I will let him capture it.

They had also heard him say, "The Lord says, 'This city will certainly be handed over to the army of the king of Babylon. They will capture it.'"

For I, the Lord, affirm that I will soon give the order and bring them back to this city. They will fight against it and capture it and burn it down. I will also make the towns of Judah desolate so that there will be no one living in them."'"

King Nebuchadnezzar of Babylon came against Jerusalem with his whole army and laid siege to it. The siege began in the tenth month of the ninth year that Zedekiah ruled over Judah.

They captured fortified cities and fertile land. They took possession of houses full of all sorts of good things -- wells previously dug, vineyards, olive trees, and fruit trees in abundance. They ate until they were full and grew fat. They enjoyed to the full your great goodness.

The people of the earth will quake when they hear Babylon has been captured. Her cries of anguish will be heard by the other nations."

"See how Babylon has been captured! See how the pride of the whole earth has been taken! See what an object of horror Babylon has become among the nations!

In the twenty-fifth year of our exile, at the beginning of the year, on the tenth day of the month, in the fourteenth year after the city was struck down, on this very day, the hand of the Lord was on me, and he brought me there.

Better to be slow to anger than to be a mighty warrior, and one who controls his temper is better than one who captures a city.