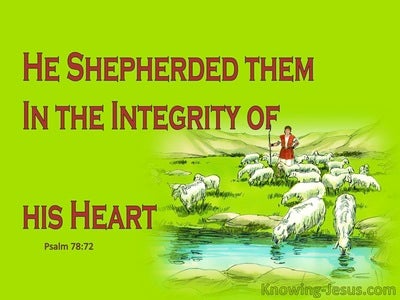 Let every soul to the higher authorities be subject, for there is no authority except from God, and the authorities existing are appointed by God,

When Samuel hath seen Saul, then hath Jehovah answered him, 'Lo, the man of whom I have spoken unto thee; this one doth restrain My people.'

And Jehovah saith unto Samuel, 'Till when art thou mourning for Saul, and I have rejected him from reigning over Israel? fill thy horn with oil, and go, I send thee unto Jesse the Beth-Lehemite, for I have seen among his sons for Myself a king.

And He fixeth on David His servant, And taketh him from the folds of a flock, From behind suckling ones He hath brought him in, To rule over Jacob His people, And over Israel His inheritance.

By me kings reign, and princes decree righteousness, By me do chiefs rule, and nobles, All judges of the earth.

And now, I -- I have given all these lands into the hand of Nebuchadnezzar king of Babylon, My servant, and also the beast of the field I have given to him to serve him;

and thou hast said unto them: Thus said Jehovah of Hosts, God of Israel: 'Lo, I am sending, and I have taken Nebuchadrezzar king of Babylon, My servant, and I have set his throne above these stones that I have hid, and he hath stretched out his pavilion over them,

And He is changing times and seasons, He is causing kings to pass away, and He is raising up kings; He is giving wisdom to the wise, and knowledge to those possessing understanding.

by the decree of the sifters is the sentence, and by the saying of the holy ones the requirement, to the intent that the living may know that the Most High is ruler in the kingdom of men, and to whom He willeth He giveth it, and the lowest of men He doth raise up over it.

Thus said Jehovah, To His anointed, to Cyrus, Whose right hand I have laid hold on, To subdue nations before him, Yea, loins of kings I loose, To open before him two-leaved doors, Yea, gates are not shut:

Lo, I am sending, and have taken all the families of the north -- an affirmation of Jehovah -- even unto Nebuchadrezzar king of Babylon, My servant, and have brought them in against this land, and against its inhabitants, and against all these nations round about, and have devoted them, and appointed them for an astonishment, and for a hissing, and for wastes age-during.

Romans 13:6
Verse Concepts
Tax To Be PaidtaxesHuman Authority, Instituted By GodServants Of The LordOrderliness In Society
Giving, Of TimeWork, Divine And HumanAuthority, of human institutionsWork, As Ordained By GodRespecting Authority

for because of this also pay ye tribute; for servants of God they are, on this very thing attending continually;

To do justice is joy to the righteous, But ruin to workers of iniquity.

whoso sheddeth man's blood, by man is his blood shed: for in the image of God hath He made man.

and any who doth not do the law of thy God, and the law of the king, speedily is judgment done upon him, whether to death, or to banishment, or to confiscation of riches, and to bonds.'

For he delivereth the needy who crieth, And the poor when he hath no helper, He hath pity on the poor and needy, And the souls of the needy he saveth, From fraud and from violence he redeemeth their soul, And precious is their blood in his eyes.

And he ruleth them according to the integrity of his heart, And by the skilfulness of his hands leadeth them!

The wrath of a king is a growl as of a young lion, And as dew on the herb his good-will.

A king by judgment establisheth a land, And one receiving gifts throweth it down.

for if indeed I am unrighteous, and anything worthy of death have done, I deprecate not to die; and if there is none of the things of which these accuse me, no one is able to make a favour of me to them; to Caesar I appeal!'

for kings, and all who are in authority, that a quiet and peaceable life we may lead in all piety and gravity,

Fear Jehovah, my son, and the king, With changers mix not up thyself, For suddenly doth their calamity rise, And the ruin of them both -- who knoweth!

Remind them to be subject to principalities and authorities, to obey rule, unto every good work to be ready,

And they having come to Capernaum, those receiving the didrachms came near to Peter, and said, 'Your teacher -- doth he not pay the didrachms?' He saith, 'Yes.' And when he came into the house, Jesus anticipated him, saying, 'What thinkest thou, Simon? the kings of the earth -- from whom do they receive custom or poll-tax? from their sons or from the strangers?' Peter saith to him, 'From the strangers.' Jesus said to him, 'Then are the sons free;read more.
but, that we may not cause them to stumble, having gone to the sea, cast a hook, and the fish that hath come up first take thou up, and having opened its mouth, thou shalt find a stater, that having taken, give to them for me and thee.'

Then the Pharisees having gone, took counsel how they might ensnare him in words, and they send to him their disciples with the Herodians, saying, 'Teacher, we have known that thou art true, and the way of God in truth thou dost teach, and thou art not caring for any one, for thou dost not look to the face of men; tell us, therefore, what dost thou think? is it lawful to give tribute to Caesar or not?'read more.
And Jesus having known their wickedness, said, 'Why me do ye tempt, hypocrites? show me the tribute-coin?' and they brought to him a denary; and he saith to them, 'Whose is this image and the inscription?' they say to him, 'Caesar's;' then saith he to them, 'Render therefore the things of Caesar to Caesar, and the things of God to God;'

and they send unto him certain of the Pharisees and of the Herodians, that they may ensnare him in discourse, and they having come, say to him, 'Teacher, we have known that thou art true, and thou art not caring for any one, for thou dost not look to the face of men, but in truth the way of God dost teach; is it lawful to give tribute to Caesar or not? may we give, or may we not give?' And he, knowing their hypocrisy, said to them, 'Why me do ye tempt? bring me a denary, that I may see;'read more.
and they brought, and he saith to them, 'Whose is this image, and the inscription?' and they said to him, 'Caesar's;' and Jesus answering said to them, 'Give back the things of Caesar to Caesar, and the things of God to God;' and they did wonder at him.

And, having watched him, they sent forth liers in wait, feigning themselves to be righteous, that they might take hold of his word, to deliver him up to the rule and to the authority of the governor, and they questioned him, saying, 'Teacher, we have known that thou dost say and teach rightly, and dost not accept a person, but in truth the way of God dost teach; Is it lawful to us to give tribute to Caesar or not?'read more.
And he, having perceived their craftiness, said unto them, 'Why me do ye tempt? shew me a denary; of whom hath it an image and superscription?' and they answering said, 'Of Caesar:' and he said to them, 'Give back, therefore, the things of Caesar to Caesar, and the things of God to God;'

And Peter and the apostles answering, said, 'To obey God it behoveth, rather than men;

And the midwives fear God, and have not done as the king of Egypt hath spoken unto them, and keep the lads alive;

and Ahab speaketh unto Naboth, saying, 'Give to me thy vineyard, and it is to me for a garden of green herbs, for it is near by my house, and I give to thee in its stead a better vineyard than it; if good in thine eyes, I give to thee silver -- its price.' And Naboth saith unto Ahab, 'Far be it from me, by Jehovah, my giving the inheritance of my fathers to thee;'

Nebuchadnezzar hath answered and hath said, 'Blessed is the God of Shadrach, Meshach, and Abed-Nego, who hath sent His messenger, and hath delivered His servants who trusted on Him, and the word of the king changed, and gave up their bodies that they might not serve nor do obeisance to any god except to their own God.

Taken counsel have all the presidents of the kingdom, the prefects, and the satraps, the counsellors, and the governors, to establish a royal statute, and to strengthen an interdict, that any who seeketh a petition from any god and man until thirty days, save of thee, O king, is cast into a den of lions. Now, O king, thou dost establish the interdict, and sign the writing, that it is not to be changed, as a law of Media and Persia, that doth not pass away.' Therefore king Darius hath signed the writing and interdict.read more.
And Daniel, when he hath known that the writing is signed, hath gone up to his house, and the window being opened for him, in his upper chamber, over-against Jerusalem, three times in a day he is kneeling on his knees, and praying, and confessing before his God, because that he was doing it before this.

and Peter and John answering unto them said, 'Whether it is righteous before God to hearken to you rather than to God, judge ye;

By faith Moses, having been born, was hid three months by his parents, because they saw the child comely, and were not afraid of the decree of the king;