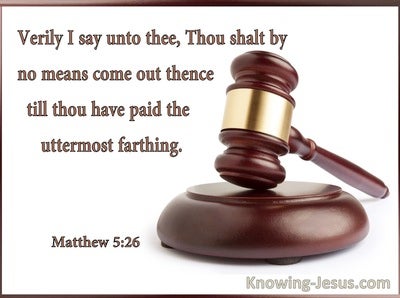 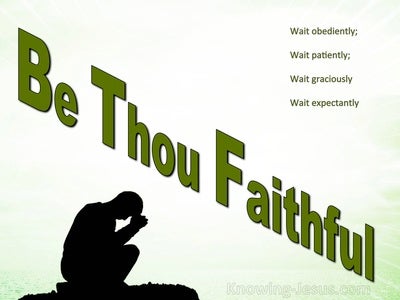 be mindful of those in bonds, as having been bound with them, of those maltreated, as also yourselves being in the body;

in stripes, in imprisonments, in insurrections, in labours, in watchings, in fastings,

for, as thou art going away with thy opponent to the ruler, in the way give diligence to be released from him, lest he may drag thee unto the judge, and the judge may deliver thee to the officer, and the officer may cast thee into prison;

save that the Holy Spirit in every city doth testify fully, saying, that for me bonds and tribulations remain;

and any who doth not do the law of thy God, and the law of the king, speedily is judgment done upon him, whether to death, or to banishment, or to confiscation of riches, and to bonds.'

and giveth them in charge in the house of the chief of the executioners, unto the round-house, the place where Joseph is a prisoner,

and the eyes of Zedekiah he hath blinded, and he bindeth him in brazen fetters, and the king of Babylon bringeth him to Babylon, and putteth him in the house of inspection unto the day of his death.

and he would not, but having gone away, he cast him into prison, till he might pay that which was owing.

and those finding him gathering wood bring him near unto Moses, and unto Aaron, and unto all the company, and they place him in ward, for it is not explained what is to be done to him.

and he causeth him to rest in charge -- to explain to them by the mouth of Jehovah.

and they had then a noted prisoner, called Barabbas,

and there was one named Barabbas, bound with those making insurrection with him, who had in the insurrection committed murder.

who had been, because of a certain sedition made in the city, and murder, cast into prison.

and Jeremiah dwelleth in the court of the prison till the day that Jerusalem hath been captured, and he was there when Jerusalem was captured.

'Surely if thou hast remembered me with thee, when it is well with thee, and hast done (I pray thee) kindness with me, and hast made mention of me unto Pharaoh, then hast thou brought me out from this house, for I was really stolen from the land of the Hebrews; and here also have I done nothing that they have put me in the pit.'

send one of you, and let him bring your brother, and ye, remain ye bound, and let your words be proved, whether truth be with you: and if not -- Pharaoh liveth! surely ye are spies;' and he removeth them unto charge three days.

and thou hast said, Thus said the king, Place ye this one in the house of restraint, and cause him to eat bread of oppression, and water of oppression, till my coming in peace.'

And Asa is angry at the seer, and giveth him to the house of torture, for he is in a rage with him for this; and Asa oppresseth some of the people at that time.

and Joseph's lord taketh him, and putteth him unto the round-house, a place where the king's prisoners are bound; and he is there in the round-house.

if ye are right men, let one of your brethren be bound in the house of your ward, and ye, go, carry in corn for the famine of your houses,

And the Philistines seize him, and pick out his eyes, and bring him down to Gaza, and bind him with two brazen fetters; and he is grinding in the prison-house.

And it cometh to pass, in the thirty and seventh year of the removal of Jehoiachin king of Judah, in the twelfth month, in the twenty and seventh of the month hath Evil-Merodach king of Babylon lifted up, in the year of his reigning, the head of Jehoiachin king of Judah, out of the house of restraint, and speaketh with him good things and putteth his throne above the throne of the kings who are with him in Babylon, and hath changed the garments of his restraint, and he hath eaten bread continually before him all days of his life,

And the king of Israel saith, 'Take ye Micaiah, and turn him back unto Amon head of the city, and unto Joash son of the king,

and laid their hands upon the apostles, and did put them in a public prison;

who such a charge having received, did put them to the inner prison, and their feet made fast in the stocks.

Lo, He breaketh down, and it is not built up, He shutteth against a man, And it is not opened.

He hath hedged my ways with hewn work, My paths He hath made crooked.

He hath hedged me about, and I go not out, He hath made heavy my fetter.

for John was not yet cast into the prison --

He hath made the world as a wilderness, And his cities he hath broken down, Of his bound ones he opened not the house.