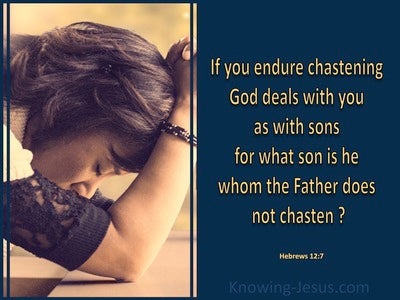 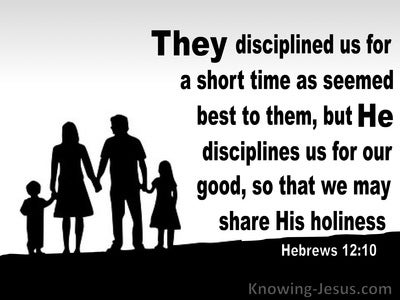 Whoso is loving instruction, is loving knowledge, And whoso is hating reproof is brutish.

For knowing wisdom and instruction, For understanding sayings of intelligence,

Bring in to instruction thy heart, And thine ear to sayings of knowledge.

Chastise thy son, and he giveth thee comfort, Yea, he giveth delights to thy soul.

A wise son -- the instruction of a father, And a scorner -- he hath not heard rebuke.

I have surely heard Ephraim bemoaning himself, 'Thou hast chastised me, And I am chastised, as a heifer not taught, Turn me back, and I turn back, For thou art Jehovah my God.

if chastening ye endure, as to sons God beareth Himself to you, for who is a son whom a father doth not chasten?

Then, indeed, fathers of our flesh we have had, chastising us, and we were reverencing them; shall we not much rather be subject to the Father of the spirits, and live?

for they, indeed, for a few days, according to what seemed good to them, were chastening, but He for profit, to be partakers of His separation;

and all chastening for the present, indeed, doth not seem to be of joy, but of sorrow, yet afterward the peaceable fruit of righteousness to those exercised through it -- it doth yield.

A sectarian man, after a first and second admonition be rejecting,

of whom are Hymenaeus and Alexander, whom I did deliver to the Adversary, that they might be instructed not to speak evil.

And I, Paul, myself, do call upon you -- through the meekness and gentleness of the Christ -- who in presence, indeed am humble among you, and being absent, have courage toward you,

to deliver up such a one to the Adversary for the destruction of the flesh, that the spirit may be saved in the day of the Lord Jesus.

I have said before, and I say it before, as being present, the second time, and being absent, now, do I write to those having sinned before, and to all the rest, that if I come again, I will not spare,

And Jehovah saith unto Joshua, 'Rise for thee, why is this? -- thou art falling on thy face? Israel hath sinned, and also they have transgressed My covenant which I commanded them, and also taken of the devoted thing, and also stolen, and also deceived, and also put it among their vessels, and the sons of Israel have not been able to stand before their enemies; the neck they turn before their enemies, for they have become a devoted thing; I add not to be with you -- if ye destroy not the devoted thing out of your midst. read more.
Rise, sanctify the people, and thou hast said, Sanctify yourselves for to-morrow; for thus said Jehovah, God of Israel, A devoted thing is in thy midst, O Israel, thou art not able to stand before thine enemies till your turning aside of the devoted thing out of your midst; and ye have been brought near in the morning by your tribes, and it hath been, the tribe which Jehovah doth capture doth draw near by families, and the family which Jehovah doth capture doth draw near by households, and the household which Jehovah doth capture doth draw near by men; and it hath been, he who is captured with the devoted thing is burnt with fire, he and all that he hath, because he hath transgressed the covenant of Jehovah, and because he hath done folly in Israel.' And Joshua riseth early in the morning, and bringeth Israel near by its tribes, and the tribe of Judah is captured; and he bringeth near the family of Judah, and he captureth the family of the Zarhite; and he bringeth near the family of the Zarhite by men, and Zabdi is captured; and he bringeth near his household by men, and Achan -- son of Carmi, son of Zabdi, son of Zerah, of the tribe of Judah -- is captured. And Joshua saith unto Achan, 'My son, put, I pray thee, honour on Jehovah, God of Israel, and give to Him thanks, and declare, I pray thee, to me, what thou hast done -- hide not from me.' And Achan answereth Joshua, and saith, 'Truly I have sinned against Jehovah, God of Israel, and thus and thus I have done; and I see among the spoil a goodly robe of Shinar, and two hundred shekels of silver, and one wedge of gold, whose weight is fifty shekels, and I desire them, and take them; and lo, they are hid in the earth, in the midst of my tent, and the silver under it.' And Joshua sendeth messengers, and they run unto the tent, and lo, it is hidden in his tent, and the silver under it; and they take them out of the midst of the tent, and bring them in unto Joshua, and unto all the sons of Israel, and pour them out before Jehovah. And Joshua taketh Achan son of Zerah, and the silver, and the robe, and the wedge of gold, and his sons, and his daughters, and his ox, and his ass, and his flock, and his tent, and all that he hath, and all Israel with him, and they cause them to go up the valley of Achor. And Joshua saith, 'What! thou hast troubled us! -- Jehovah doth trouble thee this day;' and all Israel cast stones at him, and they burn them with fire, and they stone them with stones, and they raise up over him a great heap of stones unto this day, and Jehovah turneth back from the heat of His anger, therefore hath one called the name of that place 'Valley of Achor' till this day.

And the sons of Israel say, 'Who is he that hath not come up in the assembly out of all the tribes of Israel unto Jehovah?' for the great oath hath been concerning him who hath not come up unto Jehovah to Mizpeh, saying, 'He is surely put to death.' And the sons of Israel repent concerning Benjamin their brother, and say, 'There hath been to-day cut off one tribe from Israel, what do we do for them -- for those who are left -- for wives, and we -- we have sworn by Jehovah not to give to them of our daughters for wives?' read more.
And they say, 'Who is that one out of the tribes of Israel who hath not come up unto Jehovah to Mizpeh?' and lo, none hath come in unto the camp from Jabesh-Gilead -- unto the assembly. And the people numbered themselves, and lo, there is not there a man of the inhabitants of Jabesh-Gilead. And the company send there twelve thousand men of the sons of valour, and command them, saying, 'Go -- and ye have smitten the inhabitants of Jabesh-Gilead by the mouth of the sword, even the women and the infants. And this is the thing which ye do; every male, and every woman knowing the lying of a male, ye devote.' And they find out of the inhabitants of Jabesh-Gilead four hundred young women, virgins, who have not known man by the lying of a male, and they bring them in unto the camp at Shiloh, which is in the land of Canaan.

And Jehovah speaketh unto Moses, saying,

sufficient to such a one is this punishment, that is by the more part,

Thou with a rod smitest him, And his soul from Sheol thou deliverest.

Lo, the happiness of mortal man, God doth reprove him: And the chastisement of the Mighty despise not,

according as I did exhort thee to remain in Ephesus -- I going on to Macedonia -- that thou mightest charge certain not to teach any other thing,

for whom the Lord doth love He doth chasten, and He scourgeth every son whom He receiveth;'

if chastening ye endure, as to sons God beareth Himself to you, for who is a son whom a father doth not chasten?

In the lips of the intelligent is wisdom found, And a rod is for the back of him who is lacking understanding.