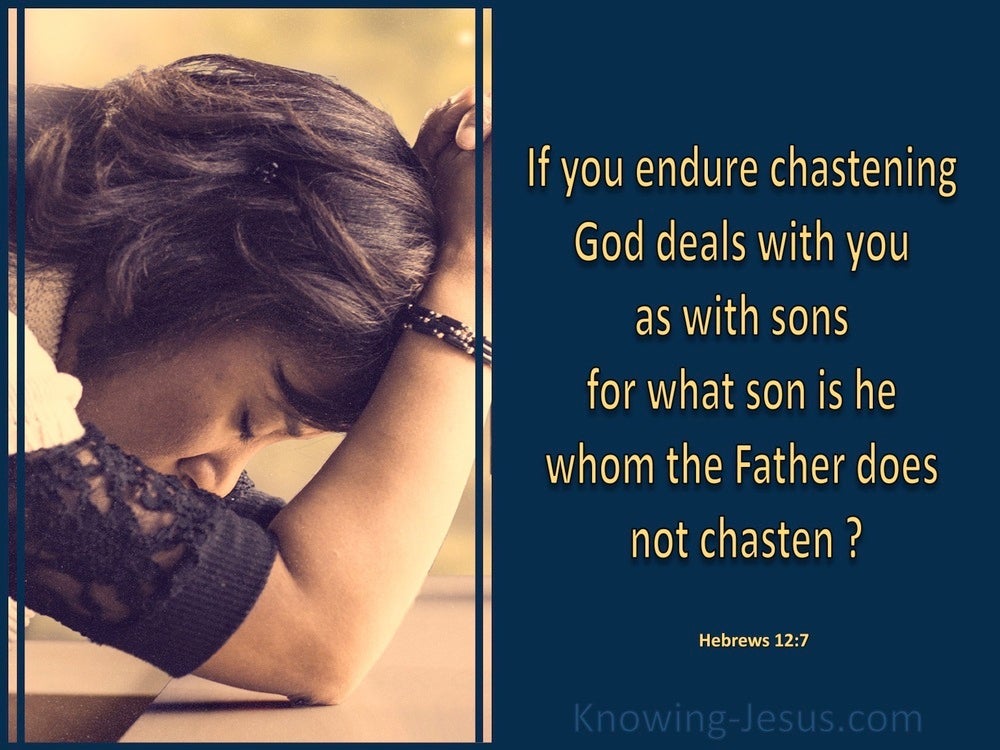 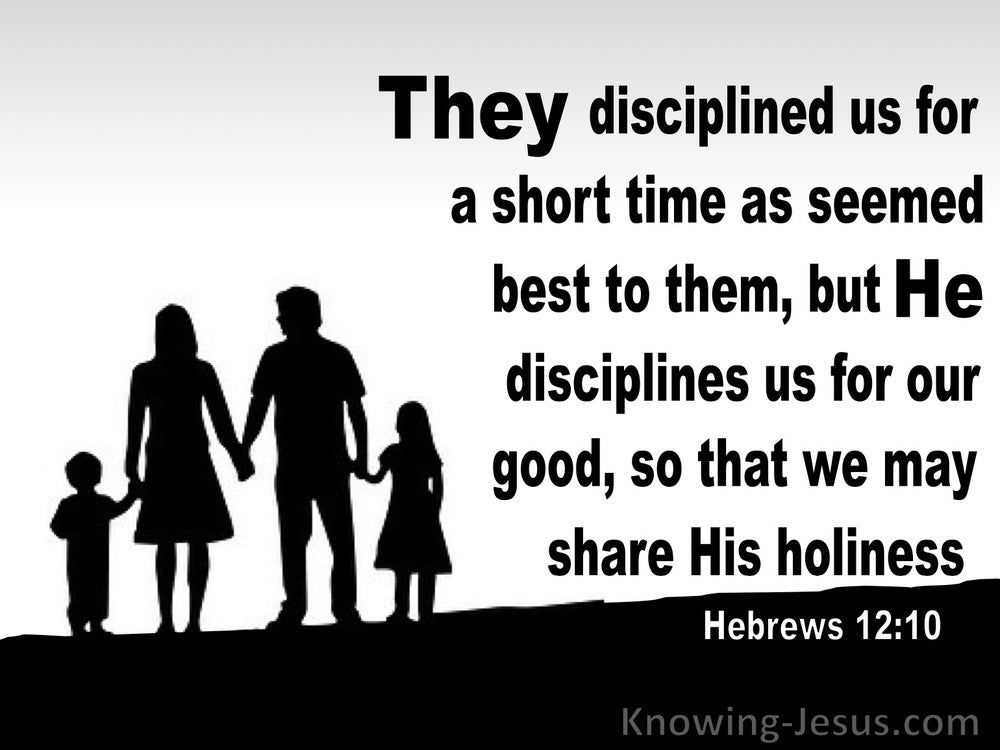 Whoever loves discipline loves knowledge,
But he who hates reproof is stupid.

To know wisdom and instruction,
To discern the sayings of understanding,

Apply your heart to discipline
And your ears to words of knowledge.

Discipline your son while there is hope,
And do not desire his death.

Correct your son, and he will give you comfort;
He will also delight your soul.

Foolishness is bound up in the heart of a child;
The rod of discipline will remove it far from him.

Do not hold back discipline from the child,
Although you strike him with the rod, he will not die.

A wise son accepts his father’s discipline,
But a scoffer does not listen to rebuke.

“I have surely heard Ephraim grieving,
‘You have chastised me, and I was chastised,
Like an untrained calf;
Bring me back that I may be restored,
For You are the Lord my God.

It is for discipline that you endure; God deals with you as with sons; for what son is there whom his father does not discipline?

Furthermore, we had earthly fathers to discipline us, and we respected them; shall we not much rather be subject to the Father of spirits, and live?

For they disciplined us for a short time as seemed best to them, but He disciplines us for our good, so that we may share His holiness.

All discipline for the moment seems not to be joyful, but sorrowful; yet to those who have been trained by it, afterwards it yields the peaceful fruit of righteousness.

I have decided to

I have previously said when present the second time, and though now absent I say in advance to those who have

So the LORD said to Joshua, "Rise up! Why is it that you have fallen on your face? "Israel has sinned, and they have also transgressed My covenant which I commanded them. And they have even taken some of the things under the ban and have both stolen and deceived. Moreover, they have also put them among their own things. "Therefore the sons of Israel cannot stand before their enemies; they turn their backs before their enemies, for they have become accursed. I will not be with you anymore unless you destroy the things under the ban from your midst. read more.
"Rise up! Consecrate the people and say, 'Consecrate yourselves for tomorrow, for thus the LORD, the God of Israel, has said, "There are things under the ban in your midst, O Israel. You cannot stand before your enemies until you have removed the things under the ban from your midst." 'In the morning then you shall come near by your tribes. And it shall be that the tribe which the LORD takes by lot shall come near by families, and the family which the LORD takes shall come near by households, and the household which the LORD takes shall come near man by man. 'It shall be that the one who is taken with the things under the ban shall be burned with fire, he and all that belongs to him, because he has transgressed the covenant of the LORD, and because he has committed a disgraceful thing in Israel.'" So Joshua arose early in the morning and brought Israel near by tribes, and the tribe of Judah was taken. He brought the family of Judah near, and he took the family of the Zerahites; and he brought the family of the Zerahites near man by man, and Zabdi was taken. He brought his household near man by man; and Achan, son of Carmi, son of Zabdi, son of Zerah, from the tribe of Judah, was taken. Then Joshua said to Achan, "My son, I implore you, give glory to the LORD, the God of Israel, and give praise to Him; and tell me now what you have done. Do not hide it from me." So Achan answered Joshua and said, "Truly, I have sinned against the LORD, the God of Israel, and this is what I did: when I saw among the spoil a beautiful mantle from Shinar and two hundred shekels of silver and a bar of gold fifty shekels in weight, then I coveted them and took them; and behold, they are concealed in the earth inside my tent with the silver underneath it." So Joshua sent messengers, and they ran to the tent; and behold, it was concealed in his tent with the silver underneath it. They took them from inside the tent and brought them to Joshua and to all the sons of Israel, and they poured them out before the LORD. Then Joshua and all Israel with him, took Achan the son of Zerah, the silver, the mantle, the bar of gold, his sons, his daughters, his oxen, his donkeys, his sheep, his tent and all that belonged to him; and they brought them up to the valley of Achor. Joshua said, "Why have you troubled us? The LORD will trouble you this day." And all Israel stoned them with stones; and they burned them with fire after they had stoned them with stones. They raised over him a great heap of stones that stands to this day, and the LORD turned from the fierceness of His anger. Therefore the name of that place has been called the valley of Achor to this day.

Then the sons of Israel said, "Who is there among all the tribes of Israel who did not come up in the assembly to the LORD?" For they had taken a great oath concerning him who did not come up to the LORD at Mizpah, saying, "He shall surely be put to death." And the sons of Israel were sorry for their brother Benjamin and said, "One tribe is cut off from Israel today. "What shall we do for wives for those who are left, since we have sworn by the LORD not to give them any of our daughters in marriage?" read more.
And they said, "What one is there of the tribes of Israel who did not come up to the LORD at Mizpah?" And behold, no one had come to the camp from Jabesh-gilead to the assembly. For when the people were numbered, behold, not one of the inhabitants of Jabesh-gilead was there. And the congregation sent 12,000 of the valiant warriors there, and commanded them, saying, "Go and strike the inhabitants of Jabesh-gilead with the edge of the sword, with the women and the little ones. "This is the thing that you shall do: you shall utterly destroy every man and every woman who has lain with a man." And they found among the inhabitants of Jabesh-gilead 400 young virgins who had not known a man by lying with him; and they brought them to the camp at Shiloh, which is in the land of Canaan.

Then the Lord spoke to Moses, saying,

Sufficient for such a one is

As I urged you

It is for discipline that you endure;