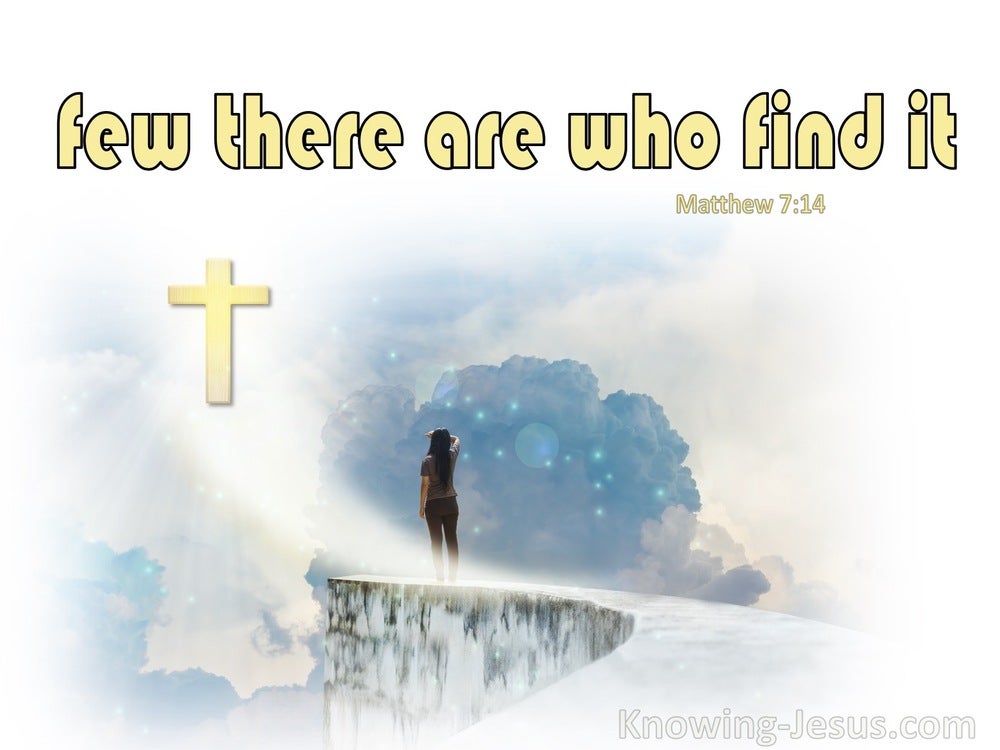 “You shall also say to this people, ‘Thus says the Lord, “Behold, I set before you the way of life and the way of death.

And someone said to Him, “Lord, are there just a few who are being saved?” And He said to them, “Strive to enter through the narrow door; for many, I tell you, will seek to enter and will not be able. Once the head of the house gets up and shuts the door, and you begin to stand outside and knock on the door, saying, ‘Lord, open up to us!’ then He will answer and say to you, ‘I do not know where you are from.’

“Now there was a rich man, and he habitually dressed in purple and fine linen, joyously living in splendor every day. And a poor man named Lazarus was laid at his gate, covered with sores, and longing to be fed with the crumbs which were falling from the rich man’s table; besides, even the dogs were coming and licking his sores.read more.
Now the poor man died and was carried away by the angels to Abraham’s bosom; and the rich man also died and was buried. In Hades he lifted up his eyes, being in torment, and *saw Abraham far away and Lazarus in his bosom. And he cried out and said, ‘Father Abraham, have mercy on me, and send Lazarus so that he may dip the tip of his finger in water and cool off my tongue, for I am in agony in this flame.’ But Abraham said, ‘Child, remember that during your life you received your good things, and likewise Lazarus bad things; but now he is being comforted here, and you are in agony.

But when he saw many of the Pharisees and Sadducees coming for baptism, he said to them, “You brood of vipers, who warned you to flee from the wrath to come? Therefore bear fruit in keeping with repentance; and do not suppose that you can say to yourselves, ‘We have Abraham for our father’; for I say to you that from these stones God is able to raise up children to Abraham.read more.
The axe is already laid at the root of the trees; therefore every tree that does not bear good fruit is cut down and thrown into the fire.

So he began saying to the crowds who were going out to be baptized by him, “You brood of vipers, who warned you to flee from the wrath to come? Therefore bear fruits in keeping with repentance, and do not begin to say to yourselves, ‘We have Abraham for our father,’ for I say to you that from these stones God is able to raise up children to Abraham. Indeed the axe is already laid at the root of the trees; so every tree that does not bear good fruit is cut down and thrown into the fire.”

“Not everyone who says to Me, ‘Lord, Lord,’ will enter the kingdom of heaven, but he who does the will of My Father who is in heaven will enter. Many will say to Me on that day, ‘Lord, Lord, did we not prophesy in Your name, and in Your name cast out demons, and in Your name perform many miracles?’ And then I will declare to them, ‘I never knew you; depart from Me, you who practice lawlessness.’

“For both prophet and priest are polluted;
Even in My house I have found their wickedness,” declares the Lord.
“Therefore their way will be like slippery paths to them,
They will be driven away into the gloom and fall down in it;
For I will bring calamity upon them,
The year of their punishment,” declares the Lord.

Then you will begin to say, ‘We ate and drank in Your presence, and You taught in our streets’; and He will say, ‘I tell you, I do not know where you are from; depart from Me, all you evildoers.’ In that place there will be weeping and gnashing of teeth when you see Abraham and Isaac and Jacob and all the prophets in the kingdom of God, but yourselves being thrown out.

“I say to you, My friends, do not be afraid of those who kill the body and after that have no more that they can do. But I will warn you whom to fear: fear the One who, after He has killed, has authority to cast into hell; yes, I tell you, fear Him!

But the person who does anything defiantly, whether he is native or an alien, that one is blaspheming the Lord; and that person shall be cut off from among his people.

For if, after they have escaped the defilements of the world by the knowledge of the Lord and Savior Jesus Christ, they are again entangled in them and are overcome, the last state has become worse for them than the first.

and will cut him in pieces and assign him a place with the hypocrites; in that place there will be weeping and gnashing of teeth.

“Woe to you, Chorazin! Woe to you, Bethsaida! For if the miracles had been performed in Tyre and Sidon which occurred in you, they would have repented long ago, sitting in sackcloth and ashes. But it will be more tolerable for Tyre and Sidon in the judgment than for you. And you, Capernaum, will not be exalted to heaven, will you? You will be brought down to Hades!

James 3:6
Verse Concepts
Beware Of Your SpeechMighty in its influenceThe TongueGehennaDamage To The Body
Fire Of Evilevil, origins ofPeople Being PollutedThe Human BodyThe Power Of Words

And the tongue is a fire, the very world of iniquity; the tongue is set among our members as that which defiles the entire body, and sets on fire the course of our life, and is set on fire by hell.