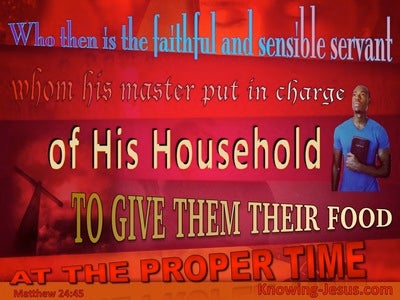 if ye are right men, let one of your brethren be bound in the house of your ward, and ye, go, carry in corn for the famine of your houses,

And Joseph commandeth, and they fill their vessels with corn, also to put back the money of each unto his sack, and to give to them provision for the way; and one doth to them so.

And the sons of Israel do so, and Joseph giveth waggons to them by the command of Pharaoh, and he giveth to them provision for the way;

and they have asked of thee of welfare, and given to thee two loaves, and thou hast received from their hand.

and we have taken ten men of a hundred, of all the tribes of Israel, and a hundred of a thousand, and a thousand of a myriad, to receive provision for the people, to do, at their coming to Gibeah of Benjamin, according to all the folly which it hath done in Israel.'

as days on which the Jews have rested from their enemies, and the month that hath been turned to them from sorrow to joy, and from mourning to a good day, to make them days of banquet and of joy, and of sending portions one to another, and gifts to the needy.

Is it not to deal to the hungry thy bread, And the mourning poor bring home, That thou seest the naked and cover him, And from thine own flesh hide not thyself?

A man -- he doth not oppress, His pledge to the debtor he doth return, Plunder he doth not take away, His bread to the hungry he doth give, And the naked doth cover with a garment,

A man -- he hath not oppressed, A pledge he hath not bound, And plunder he hath not taken away, His bread to the hungry he hath given, And the naked he covered with a garment,

He high places doth inhabit, Strongholds of rock are his high tower, His bread hath been given, his waters stedfast.

And Jesus said to them, 'They have no need to go away -- give ye them to eat.'

And he answering said to them, 'Give ye them to eat,' and they say to him, 'Having gone away, may we buy two hundred denaries' worth of loaves, and give to them to eat?'

I will recompense again, saith the Lord;' if, then, thine enemy doth hunger, feed him; if he doth thirst, give him drink; for this doing, coals of fire thou shalt heap upon his head;

'Who, then, is the servant, faithful and wise, whom his lord did set over his household, to give them the nourishment in season?

Luke 12:42
Verse Concepts
The Work Of The WiseLordship, Human And DivineWisdom, Human Importance
Who Is The One?Money Management

And the Lord said, 'Who, then, is the faithful and prudent steward whom the lord shall set over his household, to give in season the wheat measure?

'Then shall the righteous answer him, saying, Lord, when did we see thee hungering, and we nourished? or thirsting, and we gave to drink?

And Jesus said to her, 'Suffer first the children to be filled, for it is not good to take the children's bread, and to cast it to the little dogs.'

and he charged them much, that no one may know this thing, and he said that there be given to her to eat.

and her spirit came back, and she arose presently, and he directed that there be given to her to eat;

and he answering saith to them, 'He having two coats -- let him impart to him having none, and he having victuals -- in like manner let him do.'

and they gave to him part of a broiled fish, and of an honeycomb,

The disciples then said one to another, 'Did any one bring him anything to eat?'

Jesus then having lifted up his eyes and having seen that a great multitude doth come to him, saith unto Philip, 'Whence shall we buy loaves, that these may eat?' --

And Herod was highly displeased with the Tyrians and Sidonians, and with one accord they came unto him, and having made a friend of Blastus, who is over the bed-chambers of the king, they were asking peace, because of their country being nourished from the king's;

For gone a-whoring hath their mother, Acted shamefully hath their conceiver, For she hath said, I go after my lovers, Those giving my bread and my water, My wool and my flax, my oil and my drink.

Thus said Jehovah concerning the prophets Who are causing My people to err, Who are biting with their teeth, And have cried 'Peace,' And he who doth not give unto their mouth, They have sanctified against him war.

how he went into the house of God, (at 'Abiathar the chief priest,') and the loaves of the presentation did eat, which it is not lawful to eat, except to the priests, and he gave also to those who were with him?'