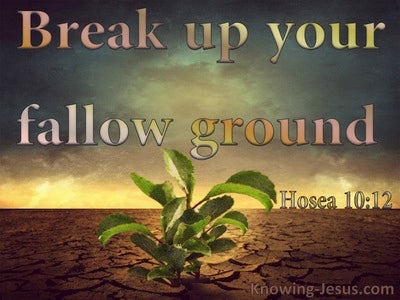 But Jesus said, "No one who puts [his] hand on the plow and looks back is fit for the kingdom of God!"

So he went from there and found Elisha son of Shaphat while he [was] plowing [with] twelve pairs of oxen before him. When he and the twelve passed Elijah, he threw his cloak on him. Then he left the oxen and ran after Elijah and said, "Please let me kiss my father and my mother, and then I will go after you." Then he said, "Go, return, for what I have done to you?" So he returned from after him, and he took a pair of oxen and slaughtered them, and with the yoke of the oxen he boiled the flesh and gave it to the people and they ate. Then he arose and went after Elijah and served him.

"And which of you who has a slave plowing or shepherding [sheep] who comes in from the field will say to him, 'Come here at once [and] recline at the table'?

Now no skilled craftsman could be found in all the land of Israel, for [the] Philistines had said, "So that the Hebrews cannot make swords or spears for themselves." So all Israel [went] down to [the] Philistines, each to have his plowshare, his mattock, his axe, and his iron plowshare sharpened. The charge was {two-thirds of a shekel} for the plowshare and for the mattock, and {a third of a shekel for the pick} and for the axe, and to set the goading sticks.

And a messenger came to Job and said, "The oxen were plowing, and the female donkeys were feeding {beside them}.

The lazy person will not plow in season; he will expect at the harvest, but there [will be] nothing.

Is it all day [that] the plowman plows, opens to sow seed, harrows his ground?

"Look, days are coming," {declares} Yahweh, "when [the one who] plows will overtake [the one who] reaps, the one who treads grapes [will catch up] with the one who sows the seed. And the mountains will drip sweet wine and all of the hills will flow [with it].

" 'And six years you will sow your land and gather its yield. But the seventh you will let it rest and leave it fallow, and the poor of your people will eat, and their remainder the animals of the field will eat. You will do likewise for your vineyard and for your olive trees.

"You shall not plow with an ox and with a donkey [yoked] together.

[Just] as I have seen, plowers of mischief and sowers of trouble will reap it.

The men of the city said to him on the seventh day before the sun went [down], "What [is] sweeter than honey? What [is] stronger than a lion?" And he said to them, "If you had not plowed with my heifer, you would not have found out my riddle."

On my back plowmen have plowed. They have made their furrows long."

As [when one] plows and breaks up the earth, [so] our bones are scattered at the mouth of Sheol.

He shall judge between the nations and he shall arbitrate for many peoples. They shall beat their swords into ploughshares and their spears into pruning hooks. A nation shall not lift up a sword against a nation, and they shall not learn war again.

For thus says Yahweh to the men of Judah and to Jerusalem, "Break up for yourselves prepared virgin soil, and you must not sow among thornbushes.

Ephraim [was] a trained heifer, that loved to thresh [grain], and I myself {spared} the fairness of her neck; I will make Ephraim break the ground, Judah will plow, Jacob must till for himself. Sow for yourselves righteousness; {reap loyal love}. Break up for yourself fallow ground; [it is] time to seek Yahweh so he will come and rain righteousness upon you.

Do horses run on rocks, or does one plow the sea with oxen? But you have turned justice into poison and [the] fruit of righteousness into wormwood!

So he went from there and found Elisha son of Shaphat while he [was] plowing [with] twelve pairs of oxen before him. When he and the twelve passed Elijah, he threw his cloak on him.

Those who sow with tears shall reap with rejoicing.