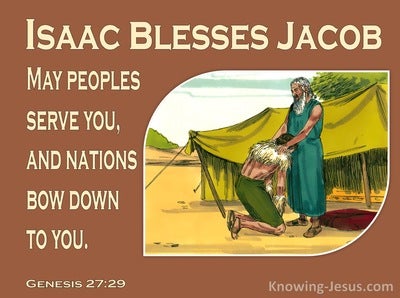 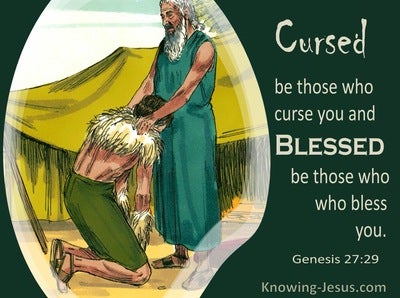 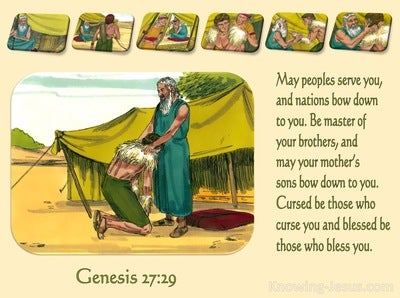 People be thy servants, and nations bow unto thee. Be lord over thy brethren, and thy mother's children stoop unto thee. Cursed be he that curseth thee, and blessed be he that blesseth thee."

Benedictions » Instances of » By isaac » Upon jacob

Covetousness » Instances of » jacob » In defrauding esau of his, father's blessing

death » Scenes of » Death of isaac

Family » Instances of infelicity in » Of isaac, on account of the disagreement between jacob and esau

the First-born » Privileges of » Authority over the younger children

isaac » The miraculous son of abraham » Was a prophet

isaac » The miraculous son of abraham » His old age, last blessing upon his sons

jacob » Prophecies concerning himself and his descendants

jacob » Summary of his character » Deceptive

Jews, the » Denunciations against those who » Cursed

Jews, the » Blessedness of blessing

Jacob, Life And Character Of 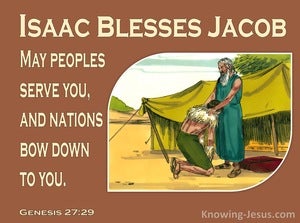 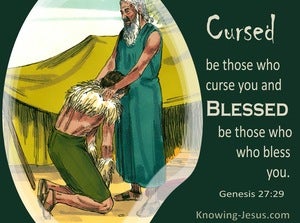 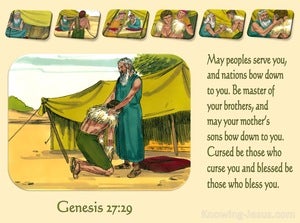 28 29  30 Now it came about, as soon as Isaac had finished blessing Jacob, and Jacob had hardly gone out from the presence of Isaac his father, that Esau his brother came in from his hunting.

But Isaac replied to Esau, “Behold, I have made him

But the children struggled together within her; and she said, “If it is so, why then am I this way?” So she went to

‘Behold, there is a people who came out of Egypt and they cover the surface of the land; now come, curse them for me; perhaps I may be able to fight against them and drive them out.’”

For it came about,

Now Amaziah strengthened himself and led his people forth, and went to

For the choir director; according to

In the days of those kings the

And on His robe and on His thigh He has