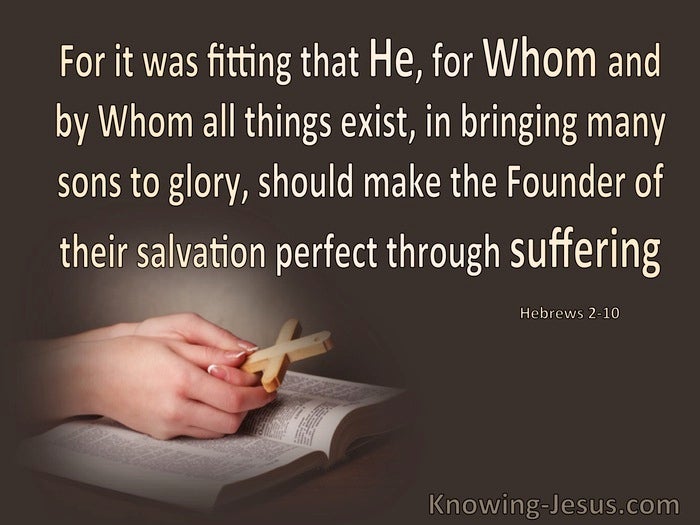 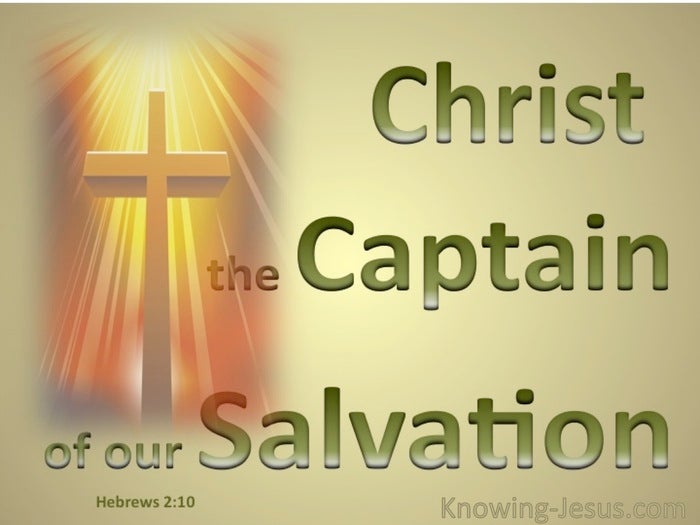 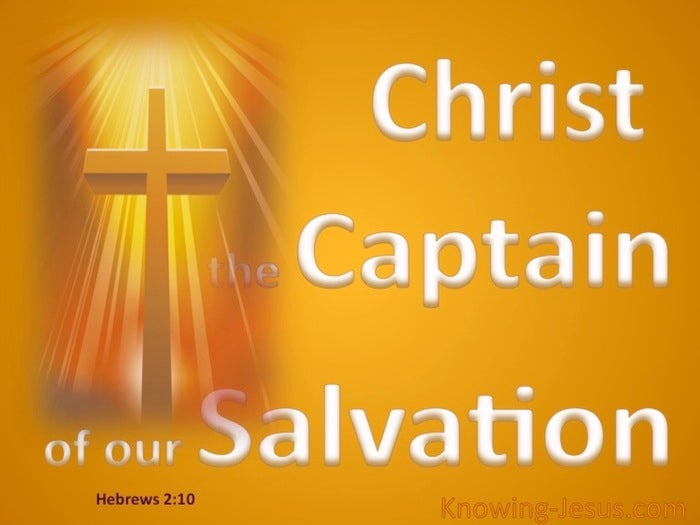 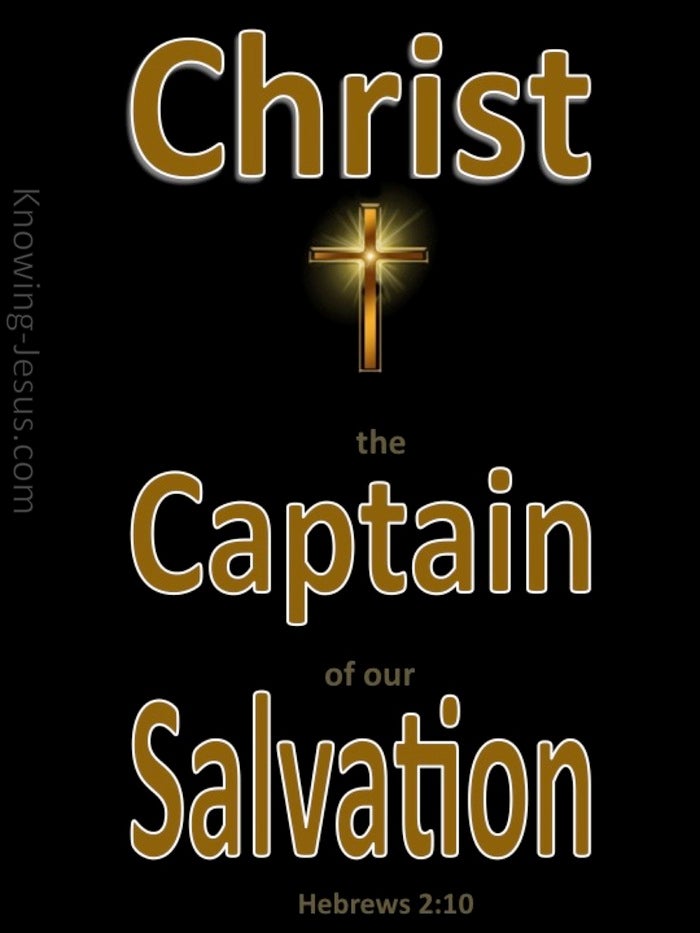 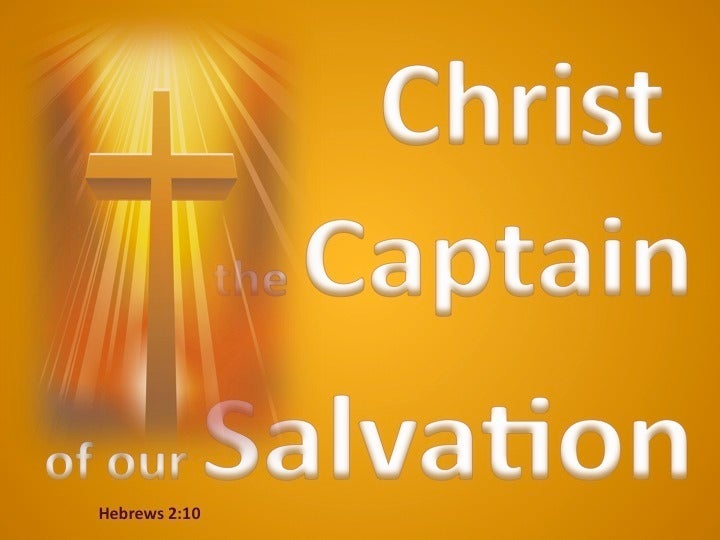 For it was fitting that God, for whom and through whom everything exists, in order to lead many [of His] children to glory [i.e., heaven], would make the author [or, pioneer] of their salvation [i.e., Jesus] completely [qualified] through [His] sufferings.

For in bringing many sons to glory, it was entirely appropriate that God—all things exist for Him and through Him—should make the source

It was fitting that God, for whom and through whom everything exists, should make the pioneer of their salvation perfect through suffering as part of his plan to glorify many children,

For it was fitting for God [that is, an act worthy of His divine nature] that He, for whose sake are all things, and through whom are all things, in bringing many sons to glory, should make the

Because it was right for him, for whom and through whom all things have being, in guiding his sons to glory, to make the captain of their salvation complete through pain.

For it was fitting that he, for whom and through whom all things exist, in bringing many sons to glory, should make the author of their salvation perfect through suffering.

For it was appropriate that he who is the great First Cause of the universe should, in guiding his many children to his glorious salvation, make their leader in it fully qualified through what he suffered.

In bringing many sons to glory, it was befitting that He for whom and by whom the universe exists, should perfect the Pioneer of their salvation by suffering.

For it befitted him, for whom and through whom all things exist, in bringing many sons to glory, to make the Pioneer of their salvation perfect through sufferings.

For it was fitting for him, for whom and through whom all things exist, in bringing many sons to glory, to make the pioneer of their salvation perfect through sufferings.

It was, indeed, fitting that God, for whom and through whom all things exist, should, when leading many sons to glory, make the author of their Salvation perfect through suffering.

For it was fitting that He for whom, and through whom, all things exist, after He had brought many sons to glory, should perfect by suffering the Prince Leader who had saved them.

For it was appropriate for Him, who is the Final Goal and the First Cause of the universe, in bringing many children to glory, to make the Leader in their salvation perfect through the process of sufferings.

For it was becoming Him, on Whose account are all things, and through Whom are all things, in bringing many sons unto glory, to perfect, through suffering, the Captain of their salvation.

Christ » Parables of found in one gospel only, (chapter specified) » Perfection of

Declaration » Declaring the lord and his works

Family » Who are members of the lordâ€™s family

Glory » Eternal » Procured by the death of Christ

Names » Of Christ » Captain of salvation

Salvation » Christ » The captain of

Sanctification » Those that are sanctified

War » Figurative » To be carried on » Under Christ, as our captain

Warfare of saints » To be carried on » Under Christ, as our captain

Names And Titles For Christ

Believers As Sons Of God

The Gospel Of Salvation

Word Count of 37 Translations in Hebrews 2:10 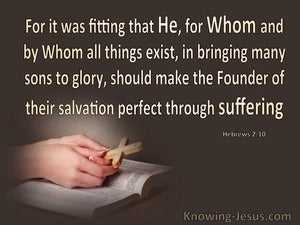 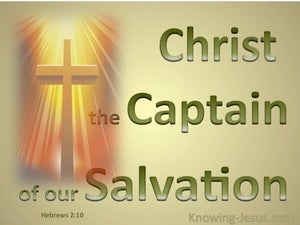 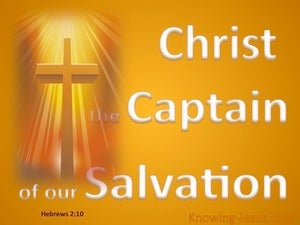 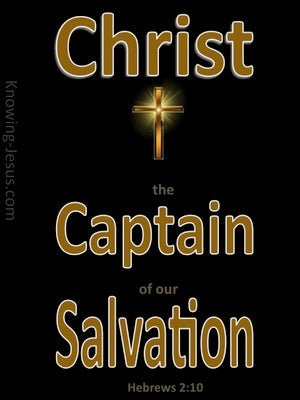 The Son's Humiliation And Suffering

9 But we do see Jesus, who was made a little bit lower than the angels [i.e., by suffering death as a human being], and was crowned with splendor and honor because He suffered death. It was by God's unearned favor that He would experience death for every person. 10 For it was fitting that God, for whom and through whom everything exists, in order to lead many [of His] children to glory [i.e., heaven], would make the author [or, pioneer] of their salvation [i.e., Jesus] completely [qualified] through [His] sufferings. 11 For, both the One who makes people holy [i.e., Jesus], and those who are made holy [i.e., Christians], all come from one [Father], and for this reason Christ is not ashamed to call them His brothers,

Was it not necessary for the Christ [i.e., God's specially chosen one] to suffer these things, and [then] to enter His glorious state [with the Father]?"

For everything was created by Him, exists through His [power] and is intended for His [glory]. May He be praised forever. May it be so.

And He said to them, "This is what was written: The Christ [i.e., God's specially chosen one] will suffer, and [then] rise again from the dead on the third day.

But God exalted Him at His right side to be a Prince and Savior and to give the people of Israel [an opportunity] to repent [i.e., change their hearts and lives] and [receive] forgiveness of [their] sins [through Him].

And He said to them, "Go and tell that fox [Note: This is a metaphor signifying the sly, cunning nature of King Herod], 'Look, I am driving out evil spirits and performing [miraculous] healings today and tomorrow, but on the third day I will be finished.'

[Then, at the hands of the Roman authorities] you killed the Prince of [never ending] life, but God raised Him from the dead, and we [apostles] were [reliable] witnesses of it.

where Jesus, our forerunner, [already] entered on our behalf, having become a Head Priest forever according to the order of Melchizedek.

For the law of Moses appoints [morally] weak men to be head priests, but the message of [God's] oath, which came after that law [Note: The quotation from Psa. 110:4 (See verse 21) was written after the law of Moses was given] appointed the Son, who was made perfect [in every way] forever.

We should fix our eyes on Jesus, the pioneer and completer of the [or, "our"] faith. [Note: Jesus is here pictured as the one who completely fulfills the life of faith, or who provides us with the ability to live such a life]. [And] because He could look forward to joy, He endured the cross, despising its shame, and has sat down at the right side of God's throne.

"May there be glory to God in the highest [heavens], and may there be peace on earth among men who are pleasing to God."

And not just [die] for the [Jewish] nation, but also that He would assemble together into one body the children of God who were scattered [throughout the world].

God presented Jesus as the atoning sacrifice [for our sins] through [our] faith in His blood [i.e., His death on the cross]. This was in order to demonstrate His justice when, by using forbearance, He passed over people's sins in previous generations.

For all of those who are led by the Spirit of God are the children of God.

For [that class of] persons whom God knew beforehand He also predetermined to become conformed to the [spiritual] likeness of His Son, so that He could be the firstborn One among [His] many brothers [i.e., so He could be the preeminent example to all His followers. See Heb. 2:11].

[What if He did this] in order to demonstrate His wealth of glory toward people who deserved His mercy, whom He had previously determined should receive [such special] honor?

But we [apostles] speak God's secret wisdom, which has been hidden [through the ages], which God predetermined for our honor before time began.

But all of us [Christians], with unveiled faces, see the Lord's splendor reflected, as [though we were] looking in a mirror, and [so] are being transformed into His likeness in ever-increasing splendor. This is [the work] of the Lord, [who is] the Holy Spirit.

For our insignificant troubles [here on earth], which last only a short time, are producing for us an immeasurable, never ending [counter-] weight of splendor [i.e., in heaven. See Rom. 8:18].

All [these] things are from God, who restored us to fellowship with Himself through Christ, and gave us the ministry of restoring [other] people to [such] fellowship.

For all of you are children of God through your faith in Christ Jesus [as God's only Son].

God predetermined that we should be [considered] His adopted children through [fellowship with] Christ. This is what pleased God and is what He wanted,

This was so that, to future ages [of people on earth and in heaven], God could demonstrate the tremendous abundance of His unearned favor, expressed by His kindness to us in [fellowship with] Christ Jesus.

This was done so that now God's many-sided wisdom could be made known through the church, to the rulers and authorities in the heavenly realms [Note: "Heavenly realms" here refers to the world around us, where these angelic beings (good or bad) view the unfolding of God's wonderful plan],

So, I endure everything for the elect's sake [i.e., God's people], so that they can obtain the salvation which comes through Christ Jesus, with [its] never ending splendor.

[And] although He was a Son, still He learned obedience from the things He suffered,

For Jesus was a very suitable head priest for us [i.e., He meets our needs very well], because He was holy, innocent, without [moral] corruption, separated from sinners and [exalted] above the heavens.

It was revealed to these prophets that you people, not they, were the ones being ministered to in the matters now being announced to you by those who preached the Gospel to you by the Holy Spirit, who was sent from heaven. [This message contained] things which angels would like to look into.

So, the elders in the various places where you live, are to receive the following exhortation. (I too, am an elder and have witnessed the sufferings of Christ, and am also assured of partaking of the glorious [salvation, 1:5] that will someday be revealed).

And the God who bestows every unearned favor [upon His people], who invited you to partake of His eternal splendor through Christ Jesus, will restore, confirm, strengthen and stabilize you people [in the faith], after you have gone through a brief time of suffering.

Look at how much love the Father has shown to us [Christians], that we should be called His children! But, that is what we [really] are! The reason the people of the world do not know who we are is because they do not know who God [really] is.

"Our Lord and our God, you deserve to receive the glory and the honor and the power for you created everything, and they exist because you wanted them to, so they were created."

After seeing [all] these things, I looked and there [I saw] a huge crowd, which no one could count, from every nation, and tribe, and race, and language group standing in front of the throne [of God] and in front of the Lamb. They were dressed in white robes and had palm tree branches in their hands.