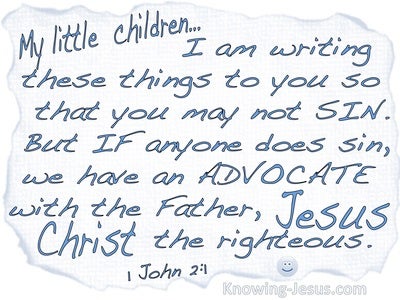 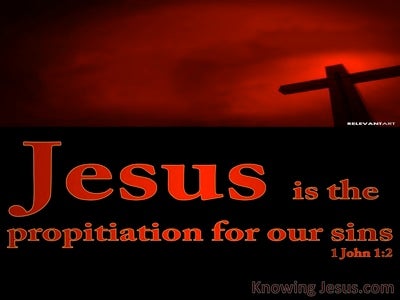 My little children, I am writing these things to you so that you may not sin. And if anyone sins, we have an Advocate with the Father, Jesus Christ the righteous;

who is at the right hand of God, having gone into heaven, after angels and authorities and powers had been subjected to Him.

My little children, I am writing these things to you so that you may not sin. And if anyone sins, we have an Advocate with the Father, Jesus Christ the righteous; and He Himself is the propitiation for our sins; and not for ours only, but also for those of the whole world.

For there is one God, and one mediator also between God and men, the man Christ Jesus,

But now He has obtained a more excellent ministry, by as much as He is also the mediator of a better covenant, which has been enacted on better promises.

For this reason He is the mediator of a new covenant, so that, since a death has taken place for the redemption of the transgressions that were committed under the first covenant, those who have been called may receive the promise of the eternal inheritance.

Hebrews 9:24
Verse Concepts
Christ And HeavenThe Temple In HeavenrealityThe Presence Of GodAntitypesAtonement, in NT
The Presence Of ChristSanctuaryJesus Christ, Love OfChrist, The High PriestCopies Of Altars

For Christ did not enter a holy place made with hands, a mere copy of the true one, but into heaven itself, now to appear in the presence of God for us;

and to Jesus, the mediator of a new covenant, and to the sprinkled blood, which speaks better than the blood of Abel.

Courts » Advocates » The accused his own

Then the priests and the prophets spoke to the officials and to all the people, saying, "A death sentence for this man! For he has prophesied against this city as you have heard in your hearing." Then Jeremiah spoke to all the officials and to all the people, saying, "The LORD sent me to prophesy against this house and against this city all the words that you have heard. "Now therefore amend your ways and your deeds and obey the voice of the LORD your God; and the LORD will change His mind about the misfortune which He has pronounced against you. read more.
"But as for me, behold, I am in your hands; do with me as is good and right in your sight. "Only know for certain that if you put me to death, you will bring innocent blood on yourselves, and on this city and on its inhabitants; for truly the LORD has sent me to you to speak all these words in your hearing."

Therefore Pilate entered again into the Praetorium, and summoned Jesus and said to Him, "Are You the King of the Jews?" Jesus answered, "Are you saying this on your own initiative, or did others tell you about Me?" Pilate answered, "I am not a Jew, am I? Your own nation and the chief priests delivered You to me; what have You done?" read more.
Jesus answered, "My kingdom is not of this world. If My kingdom were of this world, then My servants would be fighting so that I would not be handed over to the Jews; but as it is, My kingdom is not of this realm." Therefore Pilate said to Him, "So You are a king?" Jesus answered, "You say correctly that I am a king For this I have been born, and for this I have come into the world, to testify to the truth Everyone who is of the truth hears My voice."

And he captured a youth

When He had said this, one of the

Now the apostles and the brethren who were throughout Judea heard that the Gentiles also had received the word of God. And when Peter came up to Jerusalem, those who were circumcised took issue with him, saying, "You went to uncircumcised men and ate with them." read more.
But Peter began speaking and proceeded to explain to them in orderly sequence, saying, "I was in the city of Joppa praying; and in a trance I saw a vision, an object coming down like a great sheet lowered by four corners from the sky; and it came right down to me, and when I had fixed my gaze on it and was observing it I saw the four-footed animals of the earth and the wild beasts and the crawling creatures and the birds of the air. "I also heard a voice saying to me, 'Get up, Peter; kill and eat.' "But I said, 'By no means, Lord, for nothing unholy or unclean has ever entered my mouth.' "But a voice from heaven answered a second time, 'What God has cleansed, no longer consider unholy.' "This happened three times, and everything was drawn back up into the sky. "And behold, at that moment three men appeared at the house in which we were staying, having been sent to me from Caesarea. "The Spirit told me to go with them without misgivings These six brethren also went with me and we entered the man's house. "And he reported to us how he had seen the angel standing in his house, and saying, 'Send to Joppa and have Simon, who is also called Peter, brought here; and he will speak words to you by which you will be saved, you and all your household.' "And as I began to speak, the Holy Spirit fell upon them just as He did upon us at the beginning. "And I remembered the word of the Lord, how He used to say, 'John baptized with water, but you will be baptized with the Holy Spirit.' "Therefore if God gave to them the same gift as He gave to us also after believing in the Lord Jesus Christ, who was I that I could stand in God's way?" When they heard this, they quieted down and glorified God, saying, "Well then, God has granted to the Gentiles also the repentance that leads to life."

After there had been much debate, Peter stood up and said to them, "Brethren, you know that in the early days God made a choice among you, that by my mouth the Gentiles would hear the word of the gospel and believe. "And God, who knows the heart, testified to them giving them the Holy Spirit, just as He also did to us; and He made no distinction between us and them, cleansing their hearts by faith. read more.
"Now therefore why do you put God to the test by placing upon the neck of the disciples a yoke which neither our fathers nor we have been able to bear? "But we believe that we are saved through the grace of the Lord Jesus, in the same way as they also are."