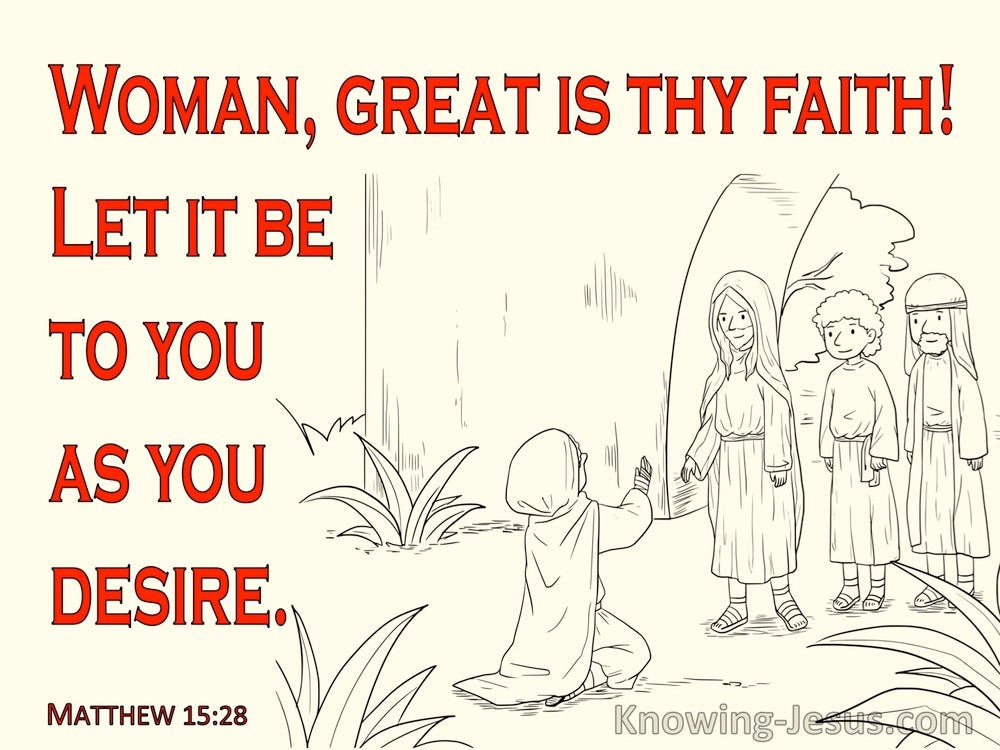 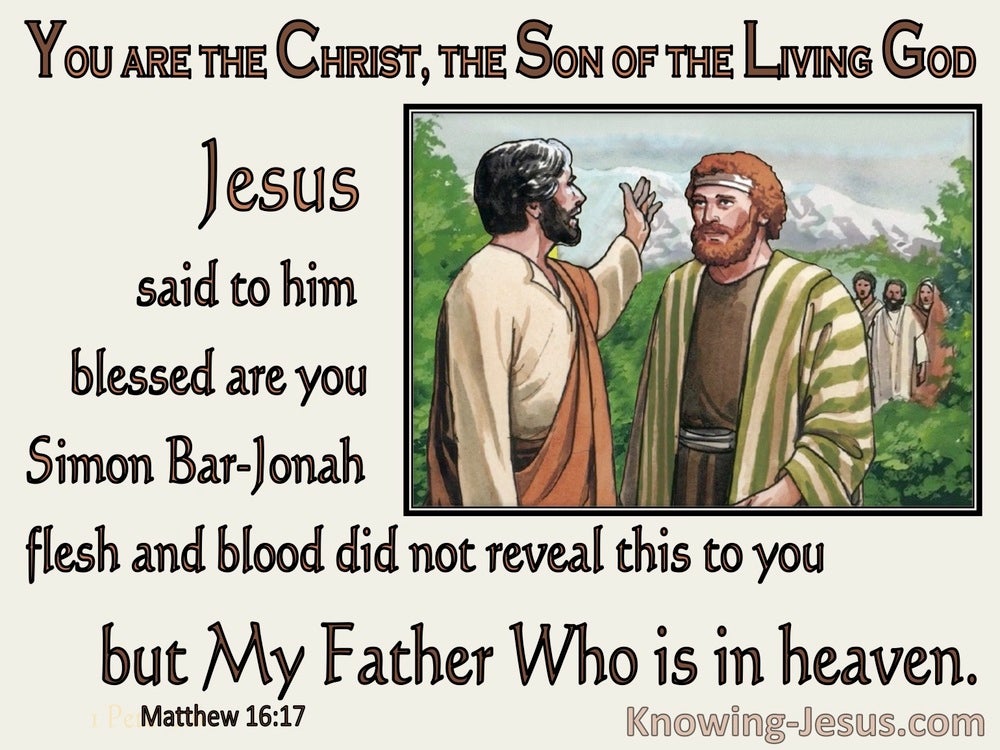 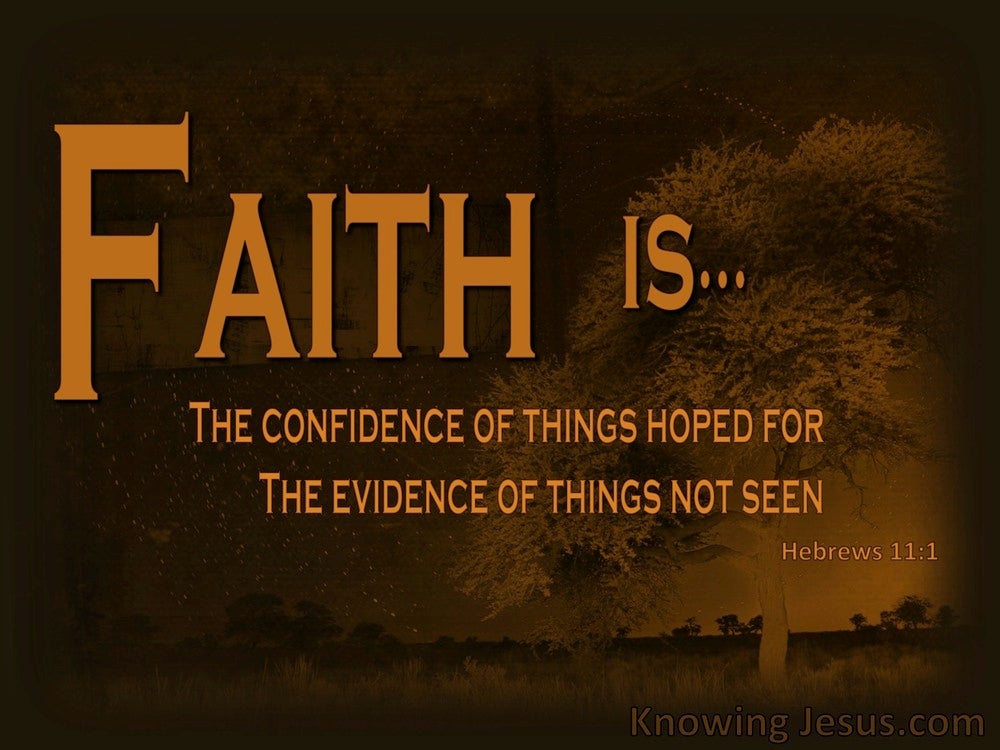 The tongue of the wise makes knowledge acceptable,
But the mouth of fools spouts folly.

One generation shall praise Your works to another,
And shall declare Your mighty acts.

But Jesus, aware of this, said to them, “Why do you bother the woman? For she has done a good deed to Me.

Now when Jesus heard this, He marveled at him, and turned and said to the crowd that was following Him, “I say to you, not even in Israel have I found such great faith.”

Then Jesus said to her, “O woman, your faith is great; it shall be done for you as you wish.” And her daughter was healed at once.

And Jesus said to him, “Blessed are you, Simon Barjona, because flesh and blood did not reveal this to you, but My Father who is in heaven. I also say to you that you are Peter, and upon this rock I will build My church; and the gates of Hades will not overpower it.

And He said, “Truly I say to you, this poor widow put in more than all of them;

By faith Abel offered to God a better sacrifice than Cain, through which he obtained the testimony that he was righteous, God testifying about his gifts, and through faith, though he is dead, he still speaks.

By faith Enoch was taken up so that he would not see death; and he was not found because God took him up; for he obtained the witness that before his being taken up he was pleasing to God.

How blessed is the man who has made the Lord his trust,
And has not turned to the proud, nor to those who lapse into falsehood.

Now faith is the assurance of things hoped for, the conviction of things not seen. For by it the men of old gained approval.

Aleph.
How blessed are those whose way is blameless,
Who walk in the law of the Lord.

He who gives attention to the word will find good,
And blessed is he who trusts in the Lord.

“How blessed is the man who does this,
And the son of man who takes hold of it;
Who keeps from profaning the sabbath,
And keeps his hand from doing any evil.”

“Blessed is the man who trusts in the Lord
And whose trust is the Lord.

“Then the King will say to those on His right, ‘Come, you who are blessed of My Father, inherit the kingdom prepared for you from the foundation of the world.

For he who in this way serves Christ is acceptable to God and approved by men.

We have sent along with him the brother whose fame in the things of the gospel has spread through all the churches;

And all these, having gained approval through their faith, did not receive what was promised,

Therefore the Lord longs to be gracious to you,
And therefore He waits on high to have compassion on you.
For the Lord is a God of justice;
How blessed are all those who long for Him.

We count those blessed who endured. You have heard of the endurance of Job and have seen the outcome of the Lord’s dealings, that the Lord is full of compassion and is merciful.

For this finds favor, if for the sake of conscience toward God a person bears up under sorrows when suffering unjustly. For what credit is there if, when you sin and are harshly treated, you endure it with patience? But if when you do what is right and suffer for it you patiently endure it, this finds favor with God.

Now in all Israel was no one as handsome as Absalom, so highly praised; from the sole of his foot to the crown of his head there was no defect in him.

For it is not he who commends himself that is approved, but he whom the Lord commends.

Pharaoh’s officials saw her and praised her to Pharaoh; and the woman was taken into Pharaoh’s house.

“Judah, your brothers shall praise you;
Your hand shall be on the neck of your enemies;
Your father’s sons shall bow down to you.

And the people blessed all the men who volunteered to live in Jerusalem.

“For when the ear heard, it called me blessed,
And when the eye saw, it gave witness of me,

A man will be praised according to his insight,
But one of perverse mind will be despised.

Those who forsake the law praise the wicked,
But those who keep the law strive with them.

Her children rise up and bless her;
Her husband also, and he praises her, saying:

He said to me, “O Daniel, man of high esteem, understand the words that I am about to tell you and stand upright, for I have now been sent to you.” And when he had spoken this word to me, I stood up trembling.

And his master praised the unrighteous manager because he had acted shrewdly; for the sons of this age are more shrewd in relation to their own kind than the sons of light.

I do not receive glory from men;

And when he wanted to go across to Achaia, the brethren encouraged him and wrote to the disciples to welcome him; and when he had arrived, he greatly helped those who had believed through grace,

Romans 2:28
Verse Concepts
True CircumcisionJewsLiving Not For The Material
LimitednessExternals

For rulers are not a cause of fear for good behavior, but for evil. Do you want to have no fear of authority? Do what is good and you will have praise from the same;

I commend to you our sister Phoebe, who is a servant of the church which is at Cenchrea;

Now I praise you because you remember me in everything and hold firmly to the traditions, just as I delivered them to you.

Are we beginning to commend ourselves again? Or do we need, as some, letters of commendation to you or from you?

I have become foolish; you yourselves compelled me. Actually I should have been commended by you, for in no respect was I inferior to the most eminent apostles, even though I am a nobody.

nor did we seek glory from men, either from you or from others, even though as apostles of Christ we might have asserted our authority.

or to governors as sent by him for the punishment of evildoers and the praise of those who do right.

We are not again commending ourselves to you but are giving you an occasion to be proud of us, so that you will have an answer for those who take pride in appearance and not in heart.